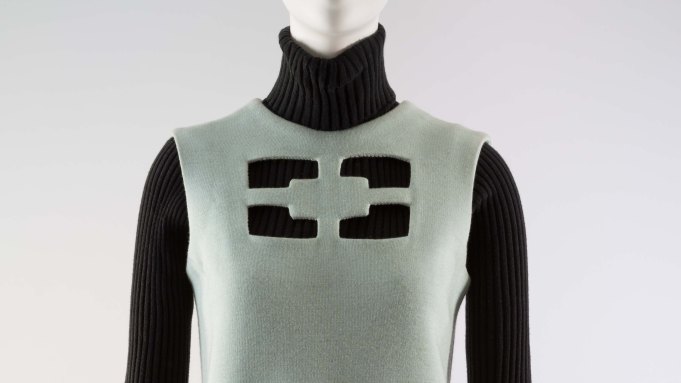 The exhibit highlights one of the most groundbreaking time periods in fashion history, examining the combined influence of French haute couture, ready-to-wear and popular culture during the era. The exhibition particularly emphasizes how fashion was perceived and promoted by the American fashion press.

The introductory gallery will include a selection of more than 30 couture garments and accessories dating from 1957 to 1960, including Yves Saint Laurent for Dior’s “trapeze” dress made from black wool and a slinky black cocktail dress from Dior’s fall 1959 collection. Saint Laurent’s designs will be shown alongside work from other young designers who were poised to become household names, such as Pierre Cardin and Hubert de Givenchy. Gabrielle “Coco” Chanel’s work will also be featured, including a 1959 red wool tweed suit with artfully notched “tulip”-shaped pockets. Cristobal Balenciaga’s designs, including a circa 1957 lace “baby-doll” dress, will also be on view.

The majority of the exhibition is devoted to styles of the Sixties, including a number of fashions by André Courrèges, including later designs, such as a pair of his famous white leather boots and a dress trimmed in black vinyl, which exemplified his influential role as “Space Age” designer. Cardin’s garments that corresponded to the Space Age will also be presented, including the minidress from his “Cosmos” collection worn by Lauren Bacall that features geometric cutouts over the breastbone.

Rounding out the exhibition are looks by such designers as Emmanuelle Khanh (which will be represented by a striped “Op Art” dress from 1966),  Karl Lagerfeld (for Chloé), Saint Laurent’s Rive Gauche, and Sonia Rykiel, who would later become the “Queen of Knits.”

All objects on view were selected from The Museum at FIT’s permanent collection of more than 50,000 garments and accessories.

“Paris Refashioned, 1957-1968” is accompanied by a book of the same title, to be published by Yale University Press next spring. It contains a comprehensive overview by the exhibition’s curator, Colleen Hill.