The snapshots of Guy Bourdin…Stores spruce up for summer…”Haute Couture,” the book…A Shanghai retrospective. 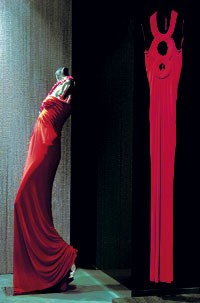 Paris stores have been sprucing up for summer. Azzaro, experiencing a renaissance under designer Vanessa Seward, has overhauled its Paris flagship at 65 Rue du Faubourg Saint Honoré with mirrored walls, silver curtains and stainless steel racks. Nearby at 39 Avenue Montaigne, Nina Ricci has welcomed its new designer, Lars Nilsson, with an overhaul of its shop, juxtaposing white marble sculptures by Janine Janet with Cadillac-style velvet banquettes. Over at No. 58, S.T. Dupont unveiled a sleek new concept shop that puts the spotlight on ready-to-wear, its famous lighters and pens, and an expanded range of accessories, including a double-CD mixing board for jet-setting DJs. Although the focus is on men’s wear, word has it women’s jewelry is on the way. Elsewhere on the street, the fur house Revillon is in the process of gutting its shop to create a raw, gallery-like space. The idea is to shake up the luxe neighborhood with bare beauty suited to Rick Owens’ designs for the brand. It should open in mid to late July. Meanwhile, Von Dutch opened its first Paris unit, at 4 Place des Victoires, on the Right Bank. John Galliano already has been spotted shopping there.

Contemporary art has a new forum. Art collector Antoine de Galbert has opened a private contemporary art foundation called Maison Rouge at 10 Boulevard de la Bastille, named for the red house that sits in the middle of the renovated factory space. The inaugural exhibit, which runs until Sept. 26, reconstitutes rooms from the houses of the 16 unnamed private art donors and their collections. There are even several bathrooms, one with Paul McCarthy’s sculpture “Cousin It” at the foot of the tub. The sprawling, 21,500-square-foot maze of spaces boasts over 500 works from primitive to contemporary.

Here’s good news for those not patient enough to wait for a place at Joël Robuchon’s eating counter — the master chef just opened a more formal restaurant, La Table de Joël Robuchon, in the posh 16th arrondissement. The menu is similar to his Atelier outlet, but at the new formal restaurant guests also can enjoy larger portions of his hit dishes — and make a reservation. Robuchon, who is busy overlooking his future Monaco, London, Las Vegas and New York openings, has entrusted one-star chef Frederic Simonin to run his new address.

The Galliera fashion museum in Paris at 10 Avenue Pierre 1er de Serbie is putting the spotlight on women’s and men’s costumes and accessories from Shanghai in the early Twenties. The exhibit, which runs from Tuesday through Aug. 1, explores the fashion revolution in Shanghai at that time, before which styles were governed by strict class and hierarchical rules. On display are 30 garments and 25 photographs from the Shanghai Arts Institute. The exhibit runs parallel to Galliera’s “Open for Inventory” exhibit, which opened in April and runs until Aug. 8.

Patrice Calmettes, a beloved fixture on the Parisian nightlife scene for decades, once took pictures for Interview and Vogue and befriended the likes of Diana Ross and Mick Jagger. More recently, he trained his lens on another legendary party place: Ibiza. The 50 photographs on display at the Galerie du Passage are more about beautiful people than fame, but he couldn’t resist a portrait of his friend Grace Jones emerging from a swimming pool. His exhibition runs until July 17 in the Galerie Vero-Dodat (entrance to the passage at 10 Rue Croix-des-Petits-Champs).

To inaugurate its new museum of photography in the Jeu de Paume off the Place de la Concorde, Paris is shining the spotlight on the erotically charged and influential images of Guy Bourdin. The museum, headed by Alain Dominique Perrin and curator Regis Durand, opened late last month. The Bourdin exhibit includes everything from his innovative ad campaigns for Charles Jourdan to pictures published in Vogue. It runs through Sept. 12. Meanwhile, two other shows are running simultaneously at the venue: Eblouissement, examining the use of light in photography, and another documenting the Warsaw uprising during World War II.

While it may not be a seaside retreat, Le Grand Hotel Intercontinental’s new I-Spa by Algotherm offers many a marine treat. Using Algotherm products, based on marine ingredients, the spa’s staff promises to rub away jet lag, jump-start slimming and boost dull complexions. Among the musts on the menu are a session in the spa’s multisensory shower, which recreates the atmosphere of a tropical rainforest, and a deep-sea seaweed wrap to be enjoyed while floating on a massaging waterbed.

Never mind the tourist slump — several new hotels in Paris have opened just in time for the rebound. Not far from the chic Faubourg Saint Honoré is the Hilton Arc de Triomphe, which boasts 512 rooms, including 25 suites, a brasserie with a spacious terrace, a bar and a spa. Interior designer Jacques Garcia’s Art Deco touch is everywhere at the hotel, inspired by a luxury cruise ship. The launch price for a standard room is $300. Meanwhile, a block away from trendy Rue Charlot in the northern Marais, sits the new Murano Urban Resort hotel. The 59-room contemporary hotel features three swimming pools, two located in private suites. There, groove flirts with luxury, and of course, the glasses are from Murano and the cuisine is Mediterranean. Single rooms start at $480, while those with a private terrace and pool run up to $2,700.

She won kudos at the Hyeres fashion festival in 1999, but it’s only now that designer Stephanie Coudert, 29, is showing her frocks to the wider public. Coudert’s first runway presentation is scheduled for 2 p.m. on July 7 at the Galerie Anne de Villepoix. Coudert described her collection as halfway between Dior’s New Look and the futurism of Pierre Cardin. “The show’s inspired by chess,” she explained. “Much of the clothes are cut on the bias and there are some reworked vintage pieces, too.”

As president of the Chambre Syndicale from 1972 to 1999, Jacques Mouclier witnessed much high drama during his tenure at the head of Paris’ governing body of fashion. Now he’s spilling the beans. In his new book, “Haute Couture” (Editions Jacques-Marie Laffont), he tells of his experiences — and run-ins — with emblematic figures from Pierre Bergé and Yves Saint Laurent to Hubert Givenchy and Madame Gres. Also recounted is the 1998 debacle when police canceled Giorgio Armani’s $1 million Paris extravaganza minutes before the show was ready to roll because the crowd allegedly broke fire regulations.