Prêt-à-Porter and Who's Next shows see strong attendance. 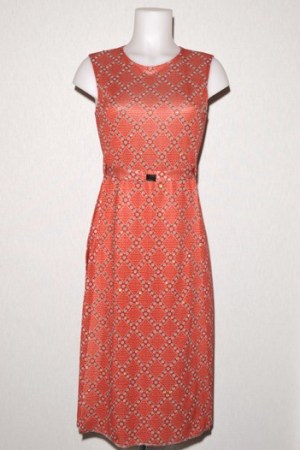 PARIS — The Prêt-à-Porter and Who’s Next trade fairs ushered in the spring-summer season with a focus on ethnic chic and dressed-down classics.

The shows, held Sept. 4 to 7 at the Porte de Versailles convention center here, attracted 57,733 buyers combined, with attendance up 5 percent compared with a year ago. International buyers represented 37 percent of attendees, a gain of 13.2 percent on 2008, with the remaining 63 percent French retailers.

Buyer numbers from the U.S., however, decreased 9.7 percent because of the recession, organizers said. Retailers at the show expressed caution.

“Everyone is trying to save, given the recession,” said Deirdre McDonnell, owner of Dublin boutique Kohl. “It’s especially challenging in these times to think that in six months you’ll have to have made the right choices.”

Maureen O’Brien, buying director at U.K. department store Joy, said, “We still have much of our budget left, but I have yet to find something to die for. Perhaps we ran too fast on the street trend — there is still too much black, too many studs and too much gothic. We’ve done that look and it should be dead and buried by spring. We’re developing items in season with suppliers for our stores.”

Paris retailer Clémence Nissant of beachwear boutique A la Plage was critical of the offerings.

“Buyers are just like the shoppers we’re seeing in-store. They need to be seduced, but the shows haven’t made much of an effort to do that,” she said. “More buyers visit showrooms beforehand and don’t bother coming to the shows at all. It’s clear that budgets have been slashed, and brands aren’t set up like they were in the past.”

Laurence Doligé launched her new signatures brand at the show after problems with investors forced her to shutter her Madame à Paris line. Doligé’s new concept caters to the Parisian woman who wants classics with a humorous touch.

“Retailers are looking for personality,” she said. “Everything looks alike these days, so they are hunting for something that really stands out.”

The challenging economic climate did not put a dent in vendors’ hopes for brisk business at the show, although they were tight-lipped about sales projections.

“We’re still fully booked and haven’t lost any customers,” said U.K.-based Orla Kiely marketing and sales manager Nicky Smith. “If anything, our calendar is the same if not better than in previous years.”

The company is expanding its lifestyle concept, and Smith confirmed the bedding and houseware lines were boosting the brand’s overall business. Orla Kiely is scouting a location to open a boutique in New York City.

Designer Christian Audigier’s Ed Hardy brand was omnipresent at the show, with a “VIP lounge” in a giant tent outside the venue, as well as branded tour buses to take customers to and from the show, and rickshaws to shuttle clients from one show to the next.