Paris Toasts 70 Years of Pierre Cardin Label — Underwear and All

Jean Paul Gaultier, Christian Louboutin and Inès de la Fressange were among the guests at a tribute to Cardin in Paris. 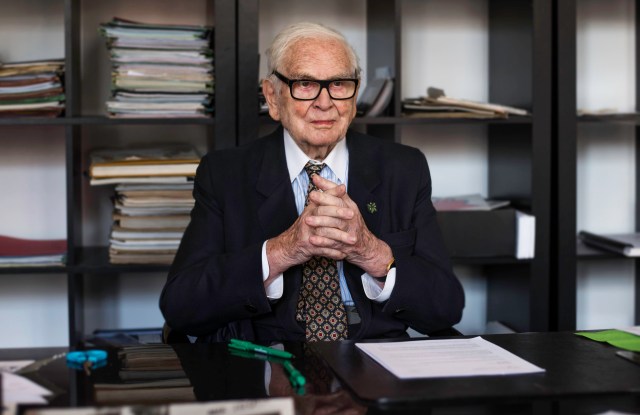 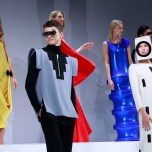 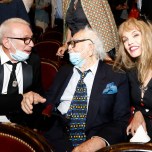 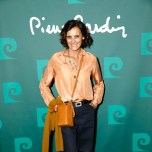 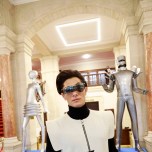 PARIS — In its first major gathering since the coronavirus pandemic broke out, the Paris fashion community came together on Monday night to celebrate the 70th anniversary of the house of Pierre Cardin with an evening of entertainment at the Théâtre du Châtelet.

The ceremony, originally scheduled to take place in April, was postponed due to the lockdown, as was the release of “House of Cardin,” the documentary that premiered at the Venice Film Festival last September and which was screened for guests at Monday’s event.

Organizers limited attendance due to ongoing sanitary restrictions designed to prevent the spread of COVID-19, leaving empty seats dotted among the audience, but social distancing flew out the window in the V.I.P. section.

There, mask-wearing guests including Jean Paul Gaultier, Christian Louboutin, Inès de la Fressange, Bianca Brandolini and Eugenie Niarchos sat shoulder-to-shoulder. Having staged his farewell show at the same theater in January, Gaultier was back to honor Cardin, who gave him his break in the fashion industry.

“He taught me freedom. I owe him everything,” Gaultier told WWD. “He’s an absolute genius and a jack-of-all-trades. He is simultaneously the director, the couturier, the head seamstress, the stage manager, the businessman, the ambassador — he wears all of those hats at once. It’s exceptional. He is truly unique.”

Michèle Lamy, wearing a gray felt dress with a swirling red shawl collar, believes Cardin is ripe for a reappraisal. “I never understood why people were not taking him as a legend. And when I see the ushers wearing the outfits, I think they are so now, so modern,” she enthused.

A masked Cardin entered to a standing ovation and cries of “Bravo!” and was promptly swarmed by well-wishers craning to have their picture taken with the 98-year-old couturier. Though the invitation flagged a “7 p.m. sharp” start time, it was 8 p.m. before Cardin’s great-nephew Rodrigo Basilicati Cardin took to the stage. 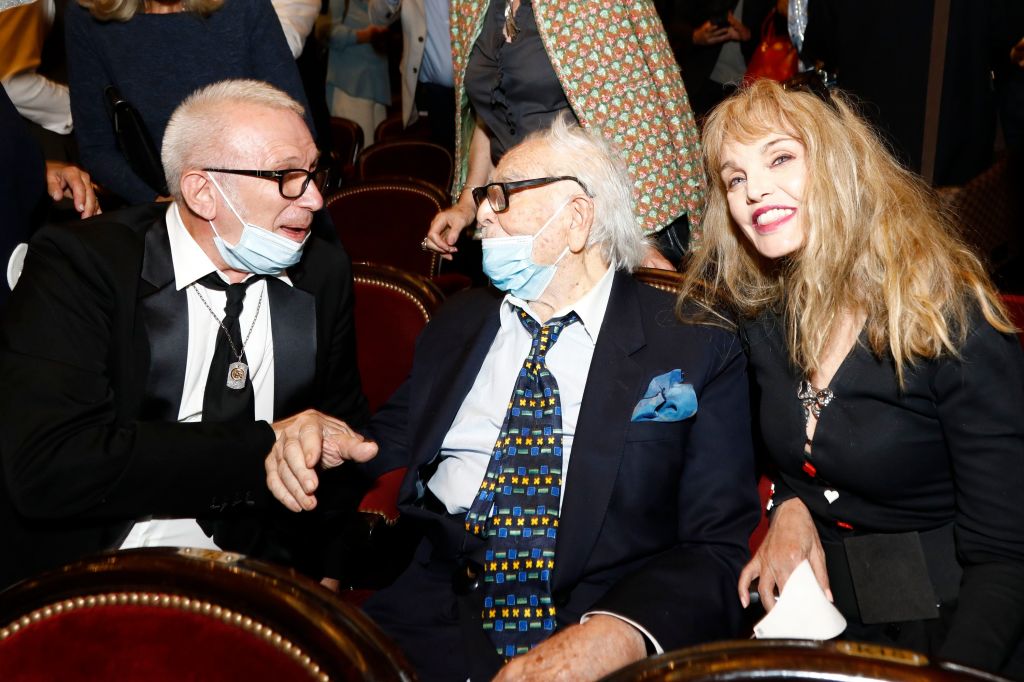 Then it was the turn of Matthew Gonder, the singer-composer who started out performing at Cardin’s restaurant Maxim’s and now heads the brand’s license operations in North America.

After running the audience through a slide show in French and English, Gonder broke into the self-penned tribute song “He’s Beyond Compare,” an instant camp classic featuring lyrics including: “You may mock him, he don’t care, his critics buy his underwear, they made him a millionaire.”

Next came the documentary, whose directors P. David Ebersole and Todd Hughes braved travel restrictions to attend the screening. To cap off the night, Basilicati Cardin presented a short film recapping the events of the last 18 months, including fashion shows in China and museum exhibitions in the United States and Germany.

For the finale, 19 models stood on the stage wearing Cardin’s most recent creations, including pant suits with geometric-patterned jackets, men’s vests worn over white peasant shirts, and an electric blue version of the metallic hoop dress once worn by Lady Gaga. His design team, including protégé Pierre Courtial, took a bow.

It was a fitting tribute to Cardin, whose long career in fashion is matched by his achievements in showbiz, which range from making the costumes for Jean Cocteau’s 1946 classic “Beauty and the Beast” to running his Espace Cardin theater for close to five decades, and even appearing on screen with his then-partner Jeanne Moreau.

“I wanted to be an actor originally,” Cardin recalled in an interview at his headquarters opposite the Élysée presidential palace, a week earlier. “I shot a film with Jeanne many moons ago and they wanted me to continue, but I had too many other things going on at the time.”

Cardin takes his reputation as a man of theater seriously. This summer, his annual festival at the Château de Lacoste was one of the only cultural events to go ahead despite the pandemic, with performances by French actor Gérard Depardieu, choreographer Marie-Claude Pietragalla and Italian tenor Andrea Bocelli.

“They appreciated my courage,” he said. He also launched a film festival in Lacoste with open-air screenings of musicals including “West Side Story,” “La La Land” and “Hair,” and continues to produce plays and musicals in Paris and elsewhere, despite dwindling audiences. 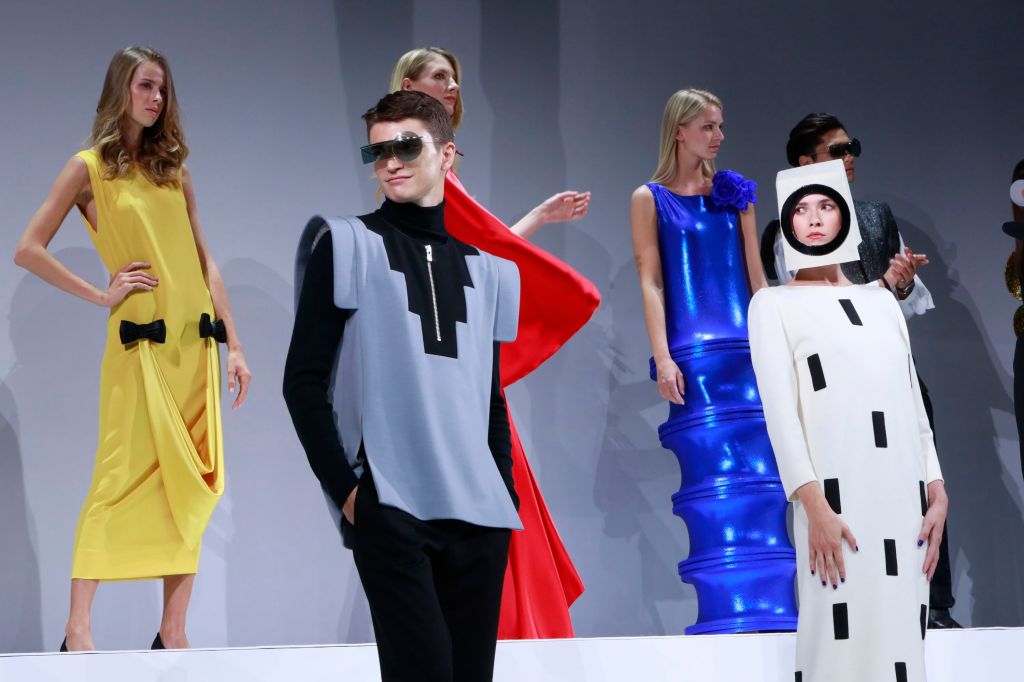 Models pose on stage during the “House of Cardin” special screening at Théâtre du Châtelet on Sept. 21, 2020, in Paris.  Julien M. Hekimian/Getty Images/Courtesy of Pierre Cardin

Construction on Cardin’s planned cultural center in Houdan, 40 miles west of Paris, has been delayed by the lockdown, but he hopes it will open next year. The space includes individual houses that will be used for artists’ residencies, and a 500-seat theater.

The designer, on the other hand, does not appear to be slowing down, even if he sometimes shows signs of fatigue. “Everyone was out of the office during lockdown, and I was working without pay,” he said, pointing to a pile of mail on his desk. “At my age, life lets go of you before you let go of it. I’m hanging on.”

Though he produces mainly licensed collections, Cardin still gets plenty of press coverage, including a six-page spread in this week’s edition of Paris Match. “I’ve had every magazine cover worldwide,” he said, showing off the 1974 edition of Time in which he poses on the cover, wearing nothing but a towel and scrunched-up socks.

And he still loves a chance to mingle, despite the new health restrictions. “I do it because it’s a moral and mental stimulation,” he explained. “When I don’t have anything to do, I’m unhappy. I must have a goal.”

Despite the upheaval triggered by COVID-19, Cardin hopes the moment will help usher in a new generation of designers.

“It’s a catastrophe for the fashion industry. On top of that, fashion has changed. There are tons of people designing, but many of them are just copying ideas,” he lamented. “The lines have shifted. You can’t design as you did in the past. You have to consider what young people want today. It always starts with young people.”

And while the documentary highlights Cardin’s pioneering role in fashion, from launching ready-to-wear to conquering markets like China, Russia and Japan, he doesn’t agree with Gaultier’s description of him as an “emperor,” saying the term is too military.

“I’m not military at all. I feel instinctively what men and women want,” he said. So what terms would he rather use? “Adventurer,” he replied. “I haven’t yet made it to the moon, but one day, perhaps.”