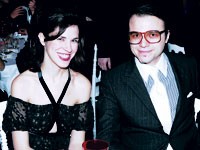 PARIS — A fashion party without champagne? Turning up their noses at various Bordeaux wines, Suzy Menkes and Yves Carcelle finagled a bottle of Veuve Clicquot at the annual Sidaction AIDS benefit dinner here Wednesday night. Enter Serge Weinberg, only hours after news came out he was being replaced by François-Henri Pinault as the head of PPR. “Are you celebrating my departure?” Weinberg asked when he encountered the pair, who burst into laughter.

For one night a year, the Paris fashion crowd calls a cease-fire in the luxury wars to chitchat through the long-winded speeches and air-kiss for a good cause. “I love him. He totally changed fashion,” Patrick Robinson cooed after an encounter with his fashion idol, Christian Lacroix, who co-chaired the dinner with Marisa Berenson, dressed in a red velvet Dior jacket fresh off the couture runway. Meanwhile, Lacroix said he’s being courted big time by Florida’s Falic brothers, who just bought his fashion house from LVMH Moët Hennessy Louis Vuitton. “Their mother came up to me after the show and said, ‘You will love us,’” Lacroix related. “And she said it in French!”