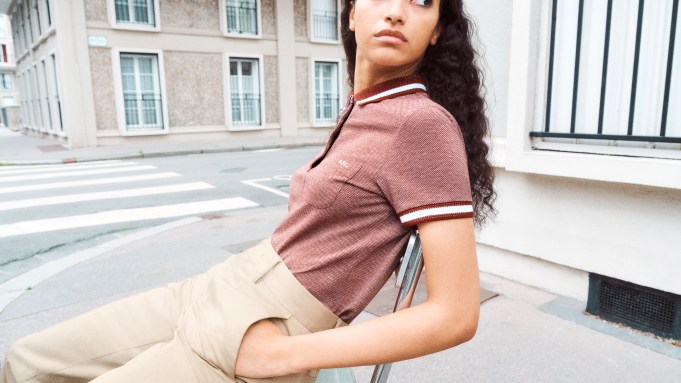 PARIS — Parisians may be proud of their oft-copied, never-quite-matched style, but after two years of travel disruptions, they’ve got their eyes set on leaving the city next spring.

As collections shown over the last week have shown, contemporary French labels have got them covered, with plenty of options to throw in a suitcase, or overnight bag, to match their destinations.

The sharply polished wardrobe of the urbanite by the likes of Maje and Zadig & Voltaire is softening out, both in tones and textures — with a sensual edge. Showing skin is in via cutouts baring large expanses at the waist and back, or through eyelet lace or chunky crochet. Nostalgia flavored the palette for these separates — jeans jackets, polo shirts, flirty skirts or sets made to be mismatched — echoing a broader appetite for vintage and time-tested styles, with mint green and bubblegum pink coming together with hues previously given a wide berth like chocolate or bold lilac.

Florals for spring aren’t a cliché, they’re a classic at Maje, where artistic director Judith Milgrom embraced the ’70s heyday of the boho aesthetic she favors. Cue a presentation centered around a flower kiosk, where crochet and floral prints were in full bloom in a palette of strong pinks, sherbet lemon shades and dynamic greens. Blouses were cut voluminous but cropped, while dresses nipped in — or bared — the waist, all creating the impression of hourglass silhouettes.

On the accessories front, the bucket-shaped sun hat was par for the course, while clogs and comfortable flats finished off looks. Maje’s popular fringed M bag, which sells at a pace of 140 units per day in the world, will be released in micro versions — just large enough to fit a phone and lip balm, really — and in crochet, for those who won’t be reaching for one of the straw bags on offer for the season. To celebrate the bag’s fifth anniversary in October, the brand is planning a mix of physical and digital activations, including a life-sized game of Tetris in the city.

Come summer, the Sandro woman only had three things on her mind: dancing, tanning and traveling. She embraced the codes of Mediterranean living, with flirty sundresses with asymmetric cutout details inspired by swimwear; knitwear with lo-fi patterns; crochet trousers and vests in naif motifs that looked bought at the local market; sun-bleached denims, and silky blouses featuring maritime motifs of anchors and ropes woven around the brand’s monogram.

Heading back into the city, she brought back an Italian tailoring spirit for blazers and matching trousers — not that she intended to wear them as a set — while her male counterpart tried to keep apace with her, dressed in an island hopper assortment of knit polo shirts, shirt jackets in acid-wash tie-dye and swimming trunk shapes.

With their feet in the sand and the dreamy voice of Canadian songstress Charlotte Cardin in their ears, the 55 guests of Zadig & Voltaire‘s spring show at the mythical Club 55 in Saint Tropez must have certainly felt like they were floating away in the azure sea as models kicked up sand with every step. “I wanted to bring out a strong and happy woman, a party mood. And she’s moving forward, so that’s where the cowboy [touches in the collection] came from,” said creative director Cécilia Bönström, pointing out the hardworking denim pieces with details such as contrasting reinforcing panels.

Coming up in 2022 is the brand’s 25th anniversary, which will be marked by reedition of signature items such as high-top sneakers or its foldover clutch, but also collaborations with artists hailing from the U.S., France, Korea and China, who will be invited to reinterpret all-time bestsellers of Zadig & Voltaire.

The idea of an escapade also included looking to less-known destinations, perhaps closer to home, like the Northern French port city of Le Havre. Its complex juxtaposition of concrete facades was the backdrop for A.P.C.‘s pragmatic staples — smartly unisex polo shirts and tailored shorts matched with leather slides — in warm-weather neutrals of white-and-blue stripes, beige and khaki.

At Maison Kitsuné, creative director Marcus Clayton — formerly at Fenty, Golden Goose and Givenchy’s women’s wear — imagined the season as a summer camp for the label, with outdoorsy wardrobes for city slickers trying to reconnect with nature. Arriving in their uniform of sharp denims, beige overcoats and tailored slacks, they’d soon find themselves swapping them out for pop-over parkas in color blocks of utilitarian neutrals that made them look patched up; nubby fleeces with fox faces scattered all over; and Scout-approved cargo shorts. All of these could be brought back to the city when cut from crisp poplin, matched with silky slip dresses in an allover Maison Kitsuné weave  — or in black.