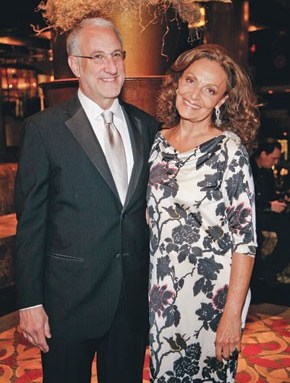 NEW YORK — Spring may have taken a hiatus on Monday, but a handful of designers at the Parsons Benefit and Fashion Show seemed to be in playful spirits nonetheless.

“She is sexy as hell, intelligent as hell and she’s an icon of our industry,” said Parsons honoree Howard Socol, Barneys New York’s chairman and chief executive officer, of the night’s other honoree, Diane von Furstenberg.

She was quick to return the compliment. “He is a muscle in the industry, and if you touch his sleeve he has muscles, too,” von Furstenberg said in accepting her honor, before adding: “If he can call me sexy, I can say he has muscles.”

The two weren’t the only ones feeling a tad flirty. Before entering the Grand Hyatt ballroom, Donna Karan took Narciso Rodriguez by the arm and gave him a hearty embrace. “Excuse me, we’re having an affair,” she joked.

Rodriguez, for his part, couldn’t conceal his affection for the two Parsons honorees. “Howard stories are endless,” he said. “He always has the funniest one-liners, which he sends to me in e-mails. Diane is like the queen here. I have such admiration for her.”

Alber Elbaz presented Socol with his award. “Mr. Socol asked me to, and I said, ‘I do,’ and he didn’t ask for marriage,” said the Lanvin designer, who left just as the graduate fashion show started in order to catch a flight back to Paris.

Meanwhile, CNN anchor Anderson Cooper, who presented von Furstenberg with her award, called the designer a “reflector of information.” Remembering a hiking trip in the rain forest last weekend, he said, “She hikes as she does all things in life — fearlessly.”

Not all went smoothly that night, however. During the dinner, panic broke out when jewelry designer Philip Crangi choked on a bite of steak. He was saved after two men gave him the Heimlich maneuver. “I am fine,” Crangi said outside the ballroom, where he was being treated by paramedics. Ever the fashion trouper, Crangi returned to the gala and took his seat to applause from the tables around him.

That night, von Furstenberg made a pledge of $250,000 to support scholarships at Parsons The New School for Design, and the benefit raised $2 million in total for the school.

Meanwhile, at the gala, Parsons dean Tim Marshall revealed that the school had tapped Simon Collins as its new dean of fashion, overseeing all areas of fashion studies, including those previously handled by Tim Gunn, who joined Liz Claiborne Inc. as chief creative officer. Before joining Parsons, Collins worked at a variety of fashion houses and retail companies, including Polo Ralph Lauren, Zegna, Fila, Marks & Spencer and Nike, where, as creative director for its Asia-Pacific division, he worked on special collaborations with Junya Watanabe and Naoki Takizawa.

Many of the school’s graduates are sure to take some of the honorees’ guiding words to heart.

“We have a saying at Barneys: ‘You need to be cool and you need to be commerce,'” Socol said, adding that young designers should listen to the “suits,” and that the suits should learn to be more cool and creative.

Von Furstenberg stressed the importance of remembering that the industry is much about emotion, explaining that a hit handbag or dress doesn’t come out of marketing meetings but a designer’s feelings.

“And don’t waste time,” she said. “Life goes fast and, before you know it, you will be standing here, where I am today.”