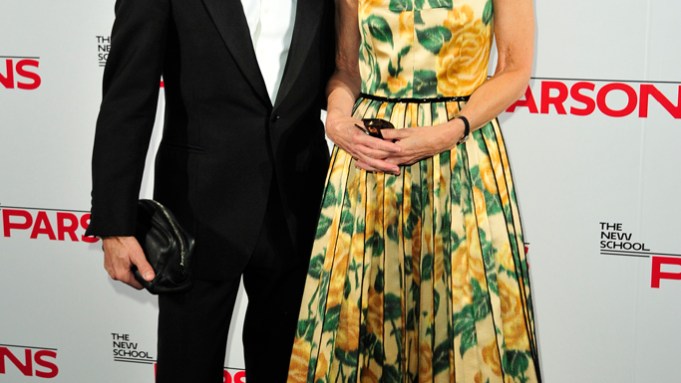 Listen up apparel design students in The New School’s Parsons School of Design’s graduating class of 2015: Donna Karan, who recently partnered with the school to open DOT, the Design, Organization, Training Center for Haitian artists in Port-au-Prince, arrived at its 67th annual Parsons Fashion Benefit on Tuesday night — an event that not only honored Marc Jacobs and LVMH Moët Hennessy Louis Vuitton but also raised more than $1.7 million for student scholarships — with some words of advice. “Try to get out as much as possible and see the world,” Karan said as she walked the red carpet at the River Pavilion at Manhattan’s Jacob K. Javits Center. “I know they want to get a job and get started, but I would like them to investigate and see what’s out there first.”

Maxwell Osborne echoed Karan’s sentiments. “Work for as many people as you can,” said the Public School designer and newly named DKNY creative director, who admitted attending the graduate shows makes him feel a little old, even though he’s only 31. “Try to learn as much as you can from other people — on somebody else’s dime — before you jump out into that cruel, cold world.”

Click Here for Full Coverage of the 2015 Graduation Shows >>

Marissa Webb said if she could go back to school, she would ask her teachers more questions. “One of them always said, ‘You can get more with honey than vinegar,’” Webb said. “That’s a good rule to live by.”

Charles Harbison, who’s designed his Harbison collection for several seasons, offered more practical wisdom: “Merchandising is everything,” he said. “Know your woman, know your man, and figure out how to merchandise your collections to [give your customer] everything that they want.”

Lucy Jones, who showed her collection in a short film and was one of eight finalists in the women’s wear category, took home women’s wear designer of the year. The 23-year-old Wales, U.K., transplant specializes in design solutions for seated individuals. “It’s really nice to see something different get recognized in fashion,” Jones said. “I want to empower disabled individuals. My younger cousin is half paralyzed — and when he was about 14, he said, ‘I can do everything, but I wish I could dress myself.’ I just thought, oh my God, it’s 2012 and no one has done this yet… There’s always been Velcro or fleece [options], but never something cutting-edge.”

After tender remarks by Anna Wintour, Jacobs, seated near Lorenzo Martone and Emily Ratajkowski, his guests for the evening, took to the podium to accept his honor. “When I was 15 years old — that was 37 years ago — I had the great good fortune of meeting and asking Perry Ellis what he would advise a young guy who dreamt of becoming a fashion designer,” Jacobs said. “[Perry], without hesitation, replied: ‘Go to Parsons.’ My mind was made up from that very moment…. but I was cautioned by my guidance counselor about the exclusivity of the Parsons fashion program, how small the classes were at the time, and how difficult it would be to get accepted. This guidance counselor suggested I have a plan B in the form of an alternative school. I, without hesitation, said, ‘No plan B. I will go to Parsons, or I will go to work in a video store.’ Luckily, for me, I got accepted.”