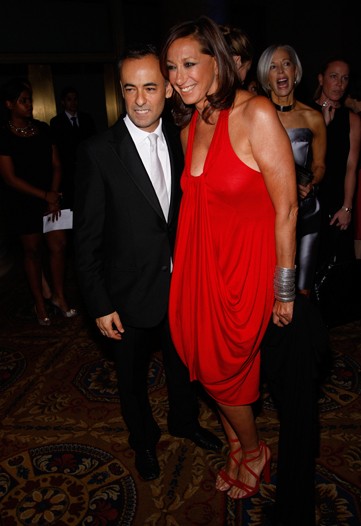 NEW YORK — Parsons The New School for Design prides itself on an education that balances design and business. Honoring both Tom Murry, Calvin Klein Inc.’s president and chief executive officer, and Francisco Costa, the women’s creative director of Calvin Klein Collection, at its benefit on Wednesday night drove that point home.

“I really want to show people what Parsons is all about,” the school’s dean of fashion, Simon Collins, said at the black-tie affair at Cipriani Wall Street.

Costa was particularly taken by the dual honor. “I wouldn’t have been successful if it wasn’t for the support of Tom,” he said. “I have been creative and have been able to take chances because he was there, so this is very special.”

In his acceptance speech, Murry reciprocated the compliment, lauding Costa and calling their joint journey over the past few years “exceptional,” and “one of the highlights of my career.”

There were also some retail heavyweights, like Saks Fifth Avenue’s Ron Frasch and Macy’s Terry Lundgren, who presented Murry with his award.

“You know, at the Academy Awards, when a movie comes out and is a giant hit…they call it a sweep,” Lundgren told the audience. “Tonight, we have a sweep — a Calvin Klein sweep.”

“He is the only date I have ever had who also makes my dress,” she said. “I feel amazing in this dress; it’s so cozy. And I can eat in it.”

Jacobs, meanwhile, was inundated by reporters about his upcoming nuptials. He said he hoped for a June wedding, and that both he and Lorenzo Martone plan to wear tuxedos.

The first Fashion Icon Award, selected by Parsons students, went to Cathy Horyn of The New York Times. “This is adorable,” she said, picking up the award. “It looks like Bill Blass’ desk.”

Parsons’ 2009 Designer of the Year award for women’s wear was a tie between Julia Blum and Robert Fitzsimmons; Edward Lorenz Tan took home the award for men’s wear, and the children’s wear honor was tied between Anika Gupta for boys and Azumi Nishizawa for girls.

The evening raised $800,000 toward scholarships and academic programs at Parsons.