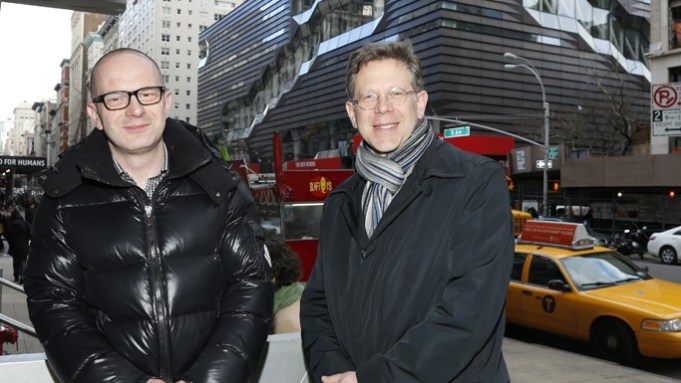 NEW YORK — Parsons The New School for Design will soon be completely integrated into the Greenwich Village campus.

The School of Fashion, which has been located in both Greenwich Village and Midtown, will exit its Seventh Avenue and 40th Street facility in early 2014. The plan is to move many of the Parsons facilities into the new University Center, a sprawling 350,000-square-foot building currently under construction at 65 Fifth Avenue, at the corner of 14th Street. The cost of the University Center is roughly $350 million, according to a spokeswoman.

The building, designed by Skidmore, Owings & Merrill, is being created to serve as a hub for The New School community and is intended to integrate many of the various divisions and disciplines. It will feature 200,000 square feet of academic space on the first seven floors, and 150,000 square feet for a 600-bed dormitory on the remaining nine floors. The academic space will accommodate specialized design studios, interdisciplinary classrooms, resource centers, an auditorium with 18 hydraulic lifts that can seat up to 800 people, a jazz lounge, library, dining facilities and student gathering spaces.

“With this new building, we’re able to achieve something we’ve been wanting to do long before I got here, which is actually bring Parsons as a school together,” said Joel Towers, executive dean of Parsons. “We’re globally recognized in fashion, but [Parsons] is also a leader in other areas of design, from architecture to interior design to communication design and photography….with the move downtown we’ll be able to bring all the design students together.”

Simon Collins, dean of the School of Fashion at Parsons, pointed out that it was time for a more modern building, since it has been operating at 40th Street and Seventh Avenue (the David M. Schwartz Fashion Education building at 560 Seventh Avenue) since 1979. Parsons has just begun contacting brokers and is exploring a possible sale or lease of the building, said a spokeswoman.

“Our curriculum and the way we teach have evolved enormously since then. We’ll finally have a building that reflects that evolution and gives us the opportunity to evolve further and interact with other schools within Parsons,” said Collins. Historically, Parsons’ fashion students traveled back and forth between the Garment District and Greenwich Village classes. They generally spent their first year in Greenwich Village taking classes, but then moved to Midtown in subsequent years for most of their classes, except for history and theory classes, which they took in the Village, said Collins. “Now they’ll be literally side by side with their colleagues in communication, photography, etc.,” he said. Parsons’ students in such disciplines as architectural design, communication design, photography, product design and interior design have always been based in the Village.

The center will meet Leadership in Energy and Environmental Design, or LEED, Gold standards, making it one of the greenest buildings in New York and one of the greenest academic institutions in the country. The dorms are expected to open in September.

Collins noted that Parsons has always acted as hub or a social space for the fashion and design industry, and he expects to be able to host meetings, lectures and fashion shows in the new building. “This will afford us a much better quality resource to provide for the various design industries,” he said. He also believes that being all together downtown in the Village will allow cross-disciplinary learning. For example, Parsons’ architecture or product design students will now be able to try their hands at a fashion design course. A redesigned curriculum, which will roll out to freshmen this fall, will enable more flexibility for students to choose their course of study. For the first time, Parsons is allowing students to have minors, not only in another discipline at the design school, but among other programs at The New School. For example, a fashion design student could minor in another area of design, psychology or a foreign language.

“The curriculum is very, very demanding, so they tend to be working, or working,” said Collins. “As we evolve the curriculum, we hope they have more time to interact with the city and their fellow students. With fellow students across the street, or in the next room, it’s a lot easier.”

For instance, he explained, fashion students work with photography students at the end of the semester to shoot their looks and this will be a lot easier with them nearby. The fashion design students can also work more closely with the communications students who design the Web sites.

Narciso Rodriguez, a graduate of Parsons, said there’s something special about that Seventh Avenue and 40th Street building, but he’s excited about the new center.

“When I was in school, the industry was much smaller and concentrated in that area. The fabric we bought was right there on 40th Street. The building on 14th Street and Fifth Avenue is such a great new phase in the school’s life. I work on 16th Street, so it’ll be nice to have the students closer to me. But I’ll always have a soft spot for that [Seventh Avenue] building. It’s such a unique, special place.”