Party With Bill, but Don’t Forget to Vote 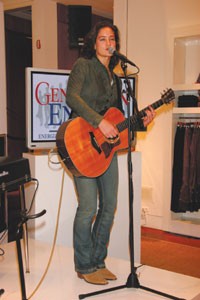 Although Clinton managed to squeeze in some shopping, his main mission was the keynote speech for Generation Engage, a nonpartisan grassroots group seeking to get twentysomethings, especially those without college diplomas, to vote and become involved in the political process.

Before Clinton delivered his 15-minute call to action, he schmoozed with Chevy Chase and his wife, Jayni, Agnes Gund and Dylan, Andrew and David Lauren, Betsy McCaughey, former New York lieutenant governor, and other VIPs across the street at the Ralph Lauren store.

“More than any other time, you have the opportunity to do public good,” Clinton said. “When you walk away from voting, you can’t say what people used to say or might have said, ‘Oh well, my vote doesn’t make a difference.’ Clearly, your vote does…People are dying to be asked to do something.”

“Whether you are Republican or Democrat, liberal or conservative, think government should or should not be more involved, you can’t go on thinking, ‘This is the way things are. There is nothing I can do.’ It’s not true,” Clinton said. “You cannot for the rest of your life look in the mirror and say ‘I regret this, this and this. I wish America were this, this and this.’ You know they’re giving you a vehicle to do it. That’s why I’m honored to be here to support the cause.”

Many in the mostly male audience sported blue suits with “Engaged” pins on their lapels. Once the Secret Service was in place, David Lauren, whose girlfriend, Lauren Bush, was nowhere to be found, took the stage and enhanced the MTV-friendly mood, saying, “I met the president a few years ago, and for those of you who have not seen him in person, he is truly one of the coolest and most respected guys out there.”

Video of the event was being beamed to Generation Engage gatherings in Raleigh, N.C., and Richmond, Va. Clinton urged the audience to be proactive about a slew of issues, including reducing greenhouse gases and conservation.

And Clinton noted changes in some nondemocratic countries like China. He recalled that during his presidency in 1998, callers to a radio talk show with the mayor of Shanghai were most interested in griping about potholes and traffic jams. A sure sign to Clinton that “the fate of freedom must be secure.”

After the speech, asked if there needs to be a commercial tie to generate interest, Clinton told WWD, “Not necessarily … The most important thing to pique people’s interest is to make them think that they can make a difference. That’s the great thing about this NGO [nongovernmental organization] explosion and this overall movement that is taking the country … To move toward a better democracy, we’re asking the people to do it. It’s not rhetoric. It’s wanted.”