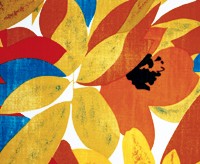 NEW YORK — What an original idea. As more and more European mills continue to open up their extensive archives, designers are flocking to check out the impressive finds, which include pieces dating as far back as the late 18th century. Especially noteworthy are the prints, many featuring bold colors and vivid patterns that were created using techniques — such as hand-wood-blocking and -dyeing — that are rarely used in today’s fast-paced, high-demand fashion world. Among those to open archive doors are Bucol and Bianchini Férier, which have been silk sources for the haute couture runways for decades. At Bianchini Férier, looks date as far back as 1820. Ratti, known for its graphic and colorful designs, touts a number of fabrics used by Gianfranco Ferré when he designed for Christian Dior in the Nineties. At Mantero, designers can browse through the 10,000-plus book library, which includes looks from British neckwear manufacturer Holliday & Brown, recently tapped for Prada’s fall 2003 collections. Also of note are Liberty’s early 1900s colorful wood-block prints, which at the time were produced just up the river from William Morris’ printworks just outside London.