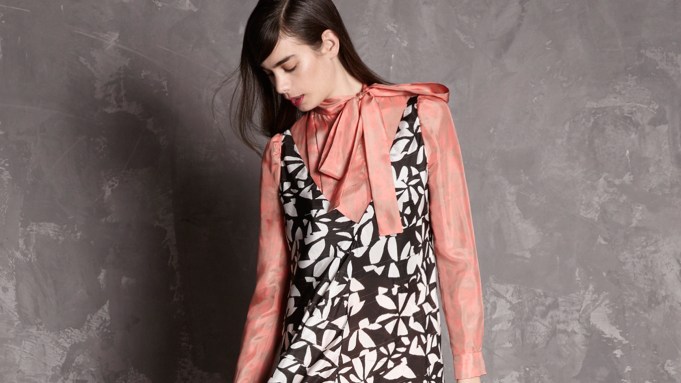 PARIS – Paule Ka hopes its new design direction will set it on a course to double in size within the next five years.

The French contemporary fashion brand’s new creative director Alithia Spuri-Zampetti is scheduled to show her first full collection in a presentation format at the Palais de Tokyo on March 7, marking a break with the label’s tradition of holding appointments at its flagship on Rue Saint-Honoré.

Formerly the head designer in charge of women’s ready-to-wear collections at Lanvin, Spuri-Zampetti was appointed with the mission of reviving the brand, which had been without a designer since the departure of founder and creative director Serge Cajfinger 18 months ago.

Her first designs — in the shape of a capsule collection that launched on Moda Operandi in January and a pre-fall collection last month — revolved around signature house codes such as the bow, Sixties influences and graphic details.

Catherine Vautrin, chairman and chief executive officer of Paule Ka, said the new look and presentation format were part of a wider overhaul that will target growth in the United States, Japan and South Korea this year.

“We have a global objective of doubling in size in the next five years,” she told WWD, noting that Paule Ka has entered a new phase of international expansion since Change Capital Partners bought a 70 percent stake in the firm in 2011.

At present, the brand is available in around 300 points of sale worldwide. This includes 62 stores and shop-in-shops, with 21 freestanding stores in France, the United Kingdom, the United States, Germany, Spain, Belgium, Luxembourg, the United Arab Emirates, Kuwait, China, Hong Kong and Singapore.

“I think the global network has room to grow and probably a target of 500 points of sale in the medium term is realistic. At the same time, existing points of sale can be galvanized. Sometimes, that involves relocating, and some openings and expansions are planned in the short term, mostly with our partners,” Vautrin added.

Vautrin, previously chairman and ceo of Cerruti, hopes to capitalize on the label’s celebrity following. Customers include Meryl Streep, Anne Hathaway and Patricia Arquette, who wore a graphic black-and-white Paule Ka gown to the Golden Globes.

“Our collections have always had two pillars — urban business chic, and dressy occasionwear going up to formal evening gowns, which are a rapidly growing part of the collection,” the executive noted.

Spuri-Zampetti, a Central Saint Martins alum who has also logged stints at Valentino and Bottega Veneta, has been charged with reinforcing the brand’s offer with more versatile fits, such as sweatshirt-style tops that can be worn belted or loose, and an expanded offer of knitwear and evening styles.

The designer is also seeking to energize shoes and bags with a baby pink lining that she hopes will become a brand signature. Vautrin noted accessories currently represent less than 10 percent of sales. “I think we can grow,” she noted.