As nicole by Nicole Miller bows tonight at the Four Seasons, J.C. Penney aims to raise its fashion bar and bring in $100 million in sales. 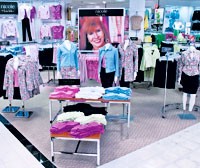 NEW YORK — With previous designer exclusives, like Halston and Mary McFadden, it seemed J.C. Penney Co. was dabbling to capture some cachet. Presentations were limited per door, and sell-throughs were mixed.

But with its nicole by Nicole Miller collection, the chain is seeking to fill a big fashion void and generate some volume, to the tune of at least $100 million in sales in the first year, according to market sources. The collection, first reported by WWD Feb, 7, will be launched in earnest tonight at the Four Seasons Hotel here, featuring Gisele Bündchen, as well as other supermodels, including Nikki Taylor and Frederique who approach the middle-aged target audience.

The advertising will be equally high-profile, making its debut during the Academy Awards on Feb. 27. Penney’s is bypassing the usual test marketing to a handful of stores and rapidly rolling out nicole by Nicole Miller to about 467 doors by Sunday. It will also be available on the Penney’s Web site and in its catalogue.

“We don’t have time to fool around with small stuff,” stated Liz Sweney, Penney’s executive vice president and general merchandise manager of women’s apparel. “We expect [nicole] to do meaningful sales. It’s not about slapping some name on the merchandise. It’s about the design of the merchandise.”

Also interviewed Monday was Nicole Miller, who gave WWD a preview of the Penney’s collection in her showroom. She said she’s already thinking about adding shoes, lingerie and accessories to the collection, which so far is primarily sportswear and knits, as well as suits, city coats, dresses and denim. The merchandise is versatile, designed for wearing to work and going out afterward. There are a lot of colorful prints and patterns paired with solids, jacquards, cotton with Lycra, and mix-and-match options. “The five-tier skirt is really cute,” said Miller. It goes best with the solid sequined tank, for a flirty appeal, she indicated.

While attempting to fill a void for “dressy casual” apparel at Penney’s, nicole by Nicole Miller brings the designer to a new distribution channel. “This is a sublabel,” said Bud Konheim, chairman and chief executive officer of Nicole Miller. Miller’s Signature collection is sold at Neiman Marcus and 50 specialty stores, while another collection is sold at Bloomingdale’s, Nordstrom, Lord & Taylor, Neiman’s and 1,200 specialty stores. There is also sportswear licensed to Donnkenny that sells in department stores, a Nicole Miller home collection sold at Bed, Bath & Beyond, a new contemporary line called Millergirl, and the designer’s bridal collection.

“We keep the distribution clean. We don’t sell off-pricers or discounters,” Konheim stressed.

He said nicole by Nicole Miller will remain exclusive to Penney’s, and there are no plans to sell additional signature lines to other chains, such as Target or Kohl’s.

“Penney’s came to us with a design proposition,” Konheim said. “They’re not trendy or of-the-moment. They’re not about flash. As a business, Penney’s is really focused on logical, horse-sense retailing. The challenge we have here is that in the past, if we made a piece of clothing for work, we made it too interesting, so women would save it for something special.”

So nicole by Nicole Miller, officials from both companies explained, is more about filling the everyday career-casual needs of Penney’s middle-aged female shoppers and reaching a happy medium. For the working woman, the fashion assortments have generally been either too dowdy or too stiff, or too junior-y.

“Quite frankly, customers told us they needed clothes to go to the office and out at night and didn’t want to feel suited up. They wanted something a little more feminine and flirty,” Sweney said.

However, the glaring absence of quality dressy casual clothes became apparent in extensive research conducted by Penney’s last spring. It involved 900 phone interviews, 30 home visits perusing wardrobes, and 800 hours of videotaping, and lots of women — typically from households with two children and income of $75,000 — venting frustration.

To cater to her new partner, Miller visited some Penney’s stores and could sense the frustration. She returned from the stores with a rather bleak assessment of the apparel, which she described as being overly comprised of “baggy dresses, ugly prints or serious suits.…It was clear there was a void.” She described nicole by Nicole Miller as “fun, happy and feminine.”

The collection’s prices will range from $26 for camisoles to $100 for a lightweight city coat, but Miller acknowledged prices could go a little higher for fall. Nicole by Nicole Miller will be sold in a new dressy casual shop concept, with a new private brand called W-Work to Weekend, which is also being launched this spring. W is metropolitan in spirit, compared with the femininely sassy nicole. Of the 1,600-square-foot area, nicole by Nicole Miller will be in front, occupying about 700 square feet and virtually impossible to miss, considering oversized photos of Miller that are 4 by 5 1/2 feet will be displayed. There will also be eight mannequins to highlight outfits, and each month, 12 to 16 new styles will be on display.

“Nicole will be our highest profile,” of the chain’s designer brands, Sweney said.

It’s expected that the nicole by Nicole Miller collection could accelerate Penney’s buildup of exclusives if it proves to be a success. But, according to Sweney, the store has no lack of opportunities. “The phone has been ringing off the hook,” especially since Karl Lagerfeld and H&M started collaborating, she said.