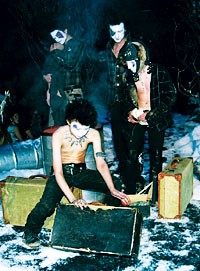 With a new leader at the Los Angeles chapter of GenArt, (publicist and show producer Lee Trimble), the show’s three-part theatrical installment late Monday night at a Culver City sound studio was a welcome diversion from the runway parade at Smashbox Studios. Guests gathered around clever, dreamlike environments, created by the designers with the help of Cirque du Soleil set artist Keith Greco. And what fun they were. On an all-white set of stairs and platforms, Society for Rational Dress’ Corinne Grassini sent out her delicate charmeuse smocks paired with frayed rust-colored linen minis.

Natalie designers Coryn Madley and Naama Givoni dove into a Thirties-tinged underwater fantasy, complete with tiny bubbles floating down from above. There were seafoam knit jumpsuits on their model mermaids; sweaters with short-sleeved batwings in brown and gold yarn insets hinting at a seahorse’s pattern, and cardigans dotted with sequin-sprinkled crochet rounds.

The dream turned nightmarish for the program’s third, and last, show, when Cosa Nostra — a favorite among Maxfield customers — sent out distressed leather jackets trimmed in recycled furs and second-skin motorcycle pants for the post-apocalyptic Goth rock pack. If the snow-covered nuclear winter stage, or the model’s chalky faces and heads wrapped in black gauze weren’t freakish enough, the crutches and splints made of metal pipes offered an unsettling image. But it’s all punk rock fun for co-designers Jeff Sebelia and Michel Berandi, who spent years creating the looks of music videos.