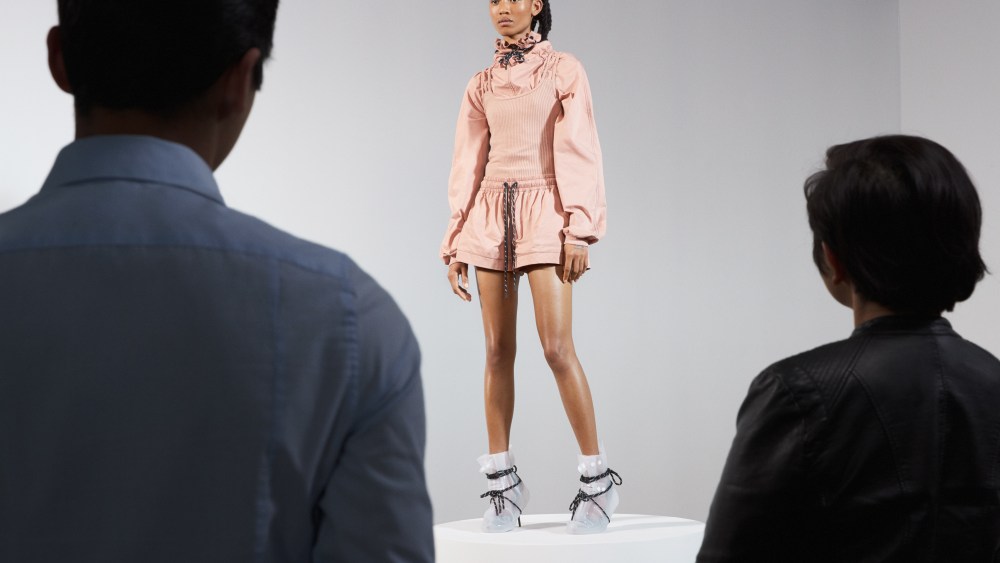 Williamsburg, Dalston, the Marais…L.A.’s Arts District. The neighborhood that’s attracted Dover Street Market, Warner Music Group, and soon a Soho House has a street fashion aesthetic all its own, at least according to the designer of a new label to watch, Perfect Number, headquartered on Traction Avenue not far from Amiri, Fear of God and other rising, made-in-L.A. brands.

“There is an easiness to the way people dress, they are not trying to fit into the social norms like in other parts of L.A…it’s slightly utilitarian and functional but making an effort,” said designer Nicola Morgan, previously at Givenchy, Lanvin, and Mugler in Paris, of her inspiration for the women’s direct-to-consumer brand.

Downtown grit mixed with L.A. glam, Perfect Number is comprised of functional pieces with feminine polish, sport and military touches. Available now, a relaxed-fit blazer has utility strap details and removable patch pockets inspired by tactical vests. Boxer shorts, slip dresses and turtlenecks with open sleeves are rendered in lipstick red or blush sequins. A nude deconstructed tulle sweatshirt is cinched at the waist with a toggle cord lock, and styled over a matching Lycra unitard for an elevated sport look. An oversize parka in glossy red PVC adds a play with proportion. And a belted utility jumpsuit that’s an early bestseller comes with detachable sleeves and pants legs, so it can be worn multiple ways. Priced from $75 to $595, the brand’s target customers are women working in creative fields.

“The idea is to subvert the established codes of femininity,” explained founder Yana Sosnovskaya, who launched an online magazine called Perfect Number Mag in tandem with the fashion business. Edited by Emily Wells with contributors from Vice, Dazed, i-D, and 032c, current features include fashion essays titled “A Brief Chronicle of Airport Style” and “Riot Grrrl and Beyond: The Power of Youth-Based Creativity,” as well as a review of the Rudi Gernreich museum exhibition in L.A.

“We wanted to create something more than a clothing brand, we wanted to create a cultural platform,” said Sosnovskaya, a native of Russia who has a background in film and came to fashion with the help of London designer David Koma, who has been an adviser on the launch of Perfect Number. “It was natural to create a tribe and community that exists online and offline, with both informational support and tangible product.”

“We want to promote Los Angeles and the lifestyle as we explore it ourselves,” added the founder, who moved to L.A. in 2017, and has scouted everywhere from The Row mixed-use retail development in downtown L.A. to Mary-Kate and Ashley Olsen’s The Row boutique on tony Melrose Place for research for the line, which is venture-backed. “Sometimes people dress up their dogs more than themselves,” joked Morgan, who moved to L.A. in September, of the city’s diverse population.

On her decision to leave Paris, where she worked in fashion for seven years, she said, “Luxury is going through a period where something new is needed. Now is a time we can consider new ways to promote fashion. Having this brand tied to a digital magazine is interesting. And being direct-to-consumer allows us to reduce margins. I was also looking forward to designing clothes for my own life. In luxury, I was always designing for women going to cocktail parties, not work. But there is a market for daywear, lifewear, and that’s what we’re trying to fulfill. We also want to be creative and experimental. Playtime is important for designers. Sometimes, you have to make something crazy and weird to design something wearable and real.”