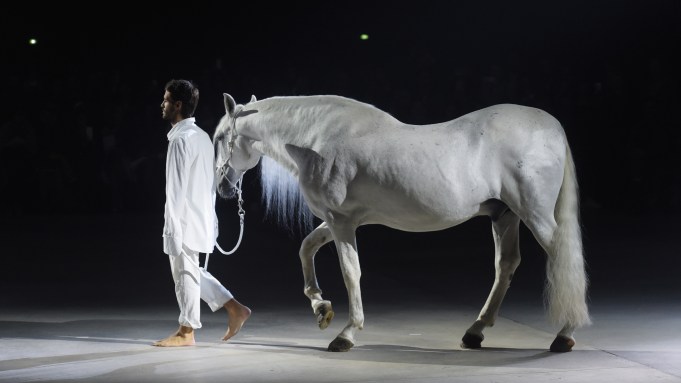 To open his spring Jacquemus show in Paris, titled “Le Nez Rouge,” Simon Porte Jacquemus enlisted his seven-year-old cousin, Jean, to roll out a giant ball of red cloth. Later, the designer took to the runway himself — dressed in white and leading a white horse — an act that was meant to symbolize hope after a bad summer, he said.

At Givenchy’s tour de force show in New York on Sept. 11— featuring several performance art vignettes staged around Pier 26, done in collaboration with Riccardo Tisci’s friend and collaborator Marina Abramović — the message of the season was love and cross-cultural inclusion.

Fashion theatrics are nothing new — Karl Lagerfeld seasonally transforms Paris’ Grand Palais, last year into a sprawling supermarket and most recently into a Chanel Airlines terminal. Marc Jacobs’ spring show was a movie-house extravaganza at Manhattan’s Ziegfeld Theatre. And then there’s Thom Browne, known for mounting surrealistic sets much like the one he dreamed up for spring — an eerie wooden schoolhouse that models entered one by one.

“I’ve always combined the collection with some sort of theatrical or performance element because I feel that conceptually based collections need to be shown in a certain context,” Browne says.

“It’s essential to think about the live aspect of a collection and also the digital aspect, as both are important,” says Brian Phillips, president and owner of Black Frame, which produces Opening Ceremony’s shows. For spring, Carol Lim and Humberto Leon cast New York City Ballet dancers for their runway, resulting in a series of surprise performances choreographed by Justin Peck.

In the business of selling clothes, designers are tasked with making an impact on weary buyers and editors.

But does the spectacle trump the fashion?

“Designers, as storytellers, understand the importance of keeping a collection the focus and letting the performance be a plus, not a minus to a show,” says Ken Downing, fashion director of Neiman Marcus.

And there’s the risk: the clothes have to live up to the theatrics, which must be perfectly executed, to be effective.

For spring, Rick Owens tapped female gymnasts and dancers to hold each other upside down “to portray the acts of

supporting, cradling, even giving birth,” as noted in WWD’s review. Asked if he sets out to provoke — one recalls the overblown controversy surrounding his partially nude male models during the fall season — Owens says matter-of-factly: “Runway shows are already choreographed performances; I just think it can go a bit further. And honestly, I’m just being selfish and doing the kind of shows I would want to go see.”