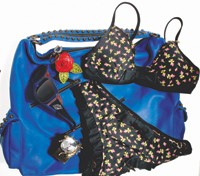 NEW YORK — Consumers today can’t pick up a Calvin Klein vacuum cleaner, Ralph Lauren toothbrush or Donna Karan cereal. But there was a time when they could purchase a Pierre Cardin blow-dryer, bicycle or bottle of wine.

In the Seventies and Eighties, when licensing was still a major business trend with fashion houses, few designers would have batted an eyelash at signing their names to merch that required little input beyond collecting regular revenue checks.

Much has changed in the designer market over the past decade.

Non-strategic licenses, once considered by designers as a way to generate a quick buck without putting up large financial sums, have proven damaging to brand equity and overall sales in the long run. To that end, fashion houses from Gucci to Christian Dior started slashing their licensing deals in the late Nineties, eliminating licenses that had little relation to their core businesses, moving fashion-related categories in-house or licensing their names only in those categories in which they lacked the manufacturing expertise and specific retail relationships, such as eyewear, timepieces and home furnishings. For instance, Polo Ralph Lauren in recent years has bought back licenses such as Lauren by Ralph Lauren, Polo Jeans Co. and footwear, but the company still maintains manufacturing arrangements in areas like eyewear, with Luxottica Group, and home, with WestPoint Stevens.

In Europe, Christian Dior recently bought back full control of Baby Dior, but maintains its deal with Safilo for eyewear, a technical category that is also the only one not directly controlled by Chanel.

By sharply refocusing their licensing efforts, Gucci, Dior and Polo have led the way to improved brand image, which consequently has helped make

licensing a deeply unfashionable proposition for many designers. But many European designer executives maintain that licensing remains a valid, attractive option for smaller firms, for whom the challenges and expense of production, commercial organization, delivery and quality control for a new category may prove daunting.

For example, Alexander McQueen does a footwear line with Puma and this fall ships his first McQ collection, a denim-based line produced under license with Italian firm SINV SpA. Stella McCartney, who last year did a one-off collection for H&M, also has a deal until 2010 with Adidas for a line of fashionable yet technical apparel, footwear and accessories.

“These brands are suited for it and ripe for it,” said Robert Polet, president and chief executive officer of Gucci Group. “The advantage as a [multibrand] group is we are able to experiment with different types of deals.”

Badgley Mischka also has been set up as a licensed business since Iconix Brand Group’s 2004 acquisition of the ready-to-wear label designed by Mark Badgley and James Mischka. To wit, Iconix has struck 10 licenses, including couture, eveningwear and bridge sportswear with Groupe JS International; bridal with Pronovias; fragrance with Riviera Concepts; handbags with Franchi Accessories, and footwear with Titan Industries. According to David Conn, executive vice president of Iconix,

future licenses could include intimate apparel, swimwear and home accessories.

Most designer companies now enter licensing agreements in product categories that may sometimes be beyond their apparel core but are still within the realm of lifestyle and fashion.

“You have to be careful not to overextend a designer brand into categories beyond its reach,” Conn said. “No matter how much money someone offers us, you have to stay true to the DNA of a brand and resist temptation. A lot of people come to us wanting to take Badgley Mischka to a lower-end distribution and we have always said ‘No, we are a luxury brand.'”

Laura Lee Miller, president of Vera Wang Licensing LLC, a Vera Wang Group division, concurred. “All licensed products must strategically be relevant to the core of the brand,” she said. “If they’re not authentic and don’t have the design expertise that lends itself to that particular category of licensed goods, then there is no sense of proprietorship, and without that, the consumer won’t purchase the product.”

Wang, who connects with her clients by servicing them on their wedding day, has used licensing to expand into bridal-related categories, such as dinnerware, stemware, barware and sterling silver tabletop and gift items with Waterford Wedgwood; fragrance with Coty; fine jewelry with Rosy Blue; stationery with William Arthur, and, most recently, mattresses with Serta. “Licensing provides a brand with an opportunity to reach beyond the domestic borders of the U.S. with the right partner,” Miller said. “Our association with Coty, for instance, allows the Vera Wang fragrance to be a global representation of the brand. The licensed products can often be ambassadors of the brand around the world.”

Not every licensing opportunity, however profitable, makes sense, though, and designers are more careful than ever to strike the right relationships.

“If somebody says, ‘We can make Oscar de la Renta cigarettes,’ that may be a very lucrative opportunity, but it would not be something that would add to our brand equity,” said Alex Bolen, president and ceo at Oscar de la Renta. “That is not what we are looking for in our licensing partnerships. We are looking at successful long-term partnerships.”

Oscar de la Renta currently has approximately 25 licenses, including O Oscar with Kellwood; fragrance with YSL Beauté; sunglasses with Allure Eyewear; furniture with Century Furniture; tabletop with Lunt Silversmiths; china by Richard Ginori, and wallpaper from En Casa. The number of licenses has declined from a decade ago, but has been steady for the past two years, Bolen added. This fall, de la Renta will launch home fragrance items such as scented candles with Viluxe, and it has just entered a licensing deal for towels with J.R. United that is expected to launch at retail early next year.

“For us, home makes particular sense,” Bolen said. “Oscar is very well known, not only for his designs but also for his lifestyle. For us, licensing a portfolio of home products is authentic and makes good sense.”

What is the secret to a healthy arrangement between designers and manufacturers? Many fashion executives said it is a well-defined contract, a prenuptial of sorts that decrees the boundaries and sets the creative control on the designer’s behalf.

“The stewardship of the brand is vital, making certain that all of the licensees really share the brand strategy, understand brand initiatives, and that there is seamless perception on the part of the consumer,” Vera Wang’s Miller said.

Jean Claude Huon, vice president, Bill Blass, concurred. “The success of a business in licensing is to control the distribution and to control the product. As soon as you have too many licensees, you can lose the control, which happened for everyone.” Bill Blass has about 40 licenses, including men’s apparel with Neema, women’s jeans with Resource Club, women’s footwear with The Fashion House and watches with Omni Quartz. This fall, the company is launching an eponymous fragrance with First American Brand.

Betsey Johnson has also been building its stable of licenses. The company’s partnerships include bags, belts and umbrellas with Daniel Friedman & Associates; jewelry with Miriam Haskell; watches with Geneva; cold weather accessories with Cejon; eyewear with B Robinson Optical; intimate apparel with Carole Hochman Designs; footwear with Titan Industries, swimwear with Lunada Bay Corp., and home with WestPoint Stevens.

“It’s very important that both sides have a mutual understanding of what the product is going to be,” said Chantal Bacon, Betsey Johnson’s business partner. “It’s crucial for the designer to respect and like what the product licensor is making and vice versa.”

Licensees, for their part, are keen to check the references before making a commitment.

“They want to make sure that the deals are financially sound and there are retail customers who will buy the product, whereas in the past, with a good name and a good idea, people might have signed the deal,” noted Andrew Jassin, managing director of the Jassin O’Rourke Group, a New York consulting firm. “Designers who wish to be licensors need to have a recognizable consumer franchise or recognized retail relationships.”