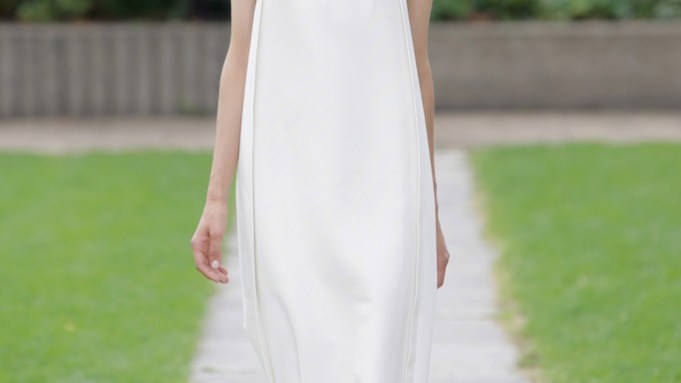 Johanna Perret and Tutia Schaad dared the elements to stage their Perret Schaad show in what could have been the very sodden garden of the Kronprinzenpalais. And though the sun shone, there was still a watery element to this collection inspired, the designers said, by their vision of a summer day on the Côte d’Azur. Indeed, the strongest pieces had a relaxed, beachy ease, with saronglike skirts and pants softly tied at the side, done in silks that were frequently laser-slit for a lighter touch.

Azure and indigo blues played a starring role, as did a lime hue mixed with pale mint and light gold. The designers neatly illustrated their constructivist bent in a long, simple white shift featuring a geometrically cut neckline and armholes, with a narrow strip of fabric stitched down the sides to accentuate the shape. The closing white jumpsuit with its striking diagonal front panel was more of a conundrum, offering no indication of how one would get in or out of it.