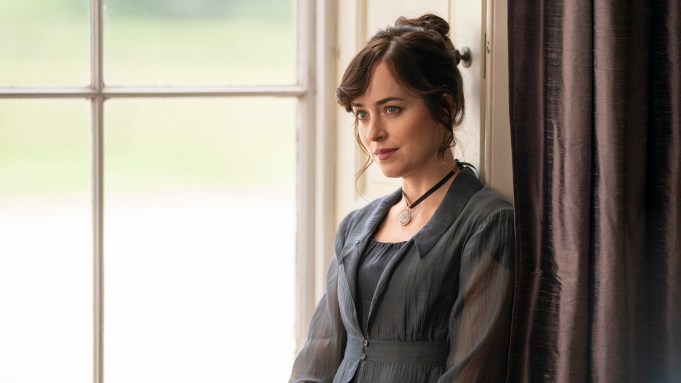 When approaching the costumes in Netflix’s “Persuasion,” costume designer Marianne Agertoft looked to “contemporary heroines” to create the wardrobe for the Jane Austen protagonist, Anne Elliot, played by Dakota Johnson.

“I looked to more contemporary heroines who I felt could express the various feel and looks I envisaged for Anne Elliot,” she said about her design process. “Patty Smith, Debbie Harry and Audrey Hepburn were featured on my mood boards. It is the attitude and ease of these amazing women that resonated with me. I think it is very much how they would wear something rather than exactly what they wore, though that naturally does matter.”

“Persuasion,” which tells the story of Elliot, a young woman still reeling from her breakup eight years prior, is set in early 1800s England during the Regency era. Agertoft approached the adaptation by incorporating period fashion — especially for the aristocratic Elliot family — and married it with contemporary style icons to create costumes that would be perceived as timeless. The movie starts streaming on Netflix on Friday.

The film is just the latest project that falls under this year’s Regencycore fashion trend, which has been inspired by other period dramas like “Bridgerton,” “The Gilded Age” and more. Unlike those period dramas — which leaned into a regal and lavish aesthetic — “Persuasion” offers a more subdued take on Regencycore, looking mainly to Empire waist dresses and lace embellishment for the costumes.

Agertoft explained her research process for the film was shortened due to a quick production time, but that she referenced historical garments and museum pieces from the time period for the characters’ wardrobes. She also had a wide range of other Jane Austen film adaptations to work from.

“Director Carrie Cracknell and I were very much on the same wave length,” she said. “We wanted to strike a visual balance with an identifiable feel and look of the period without having to be overly careful with the historical costume detail and etiquette. We decided early on that we could loosen up on the period accuracy if and when we felt like it was necessary. For instance, we were going to use bonnets and hats in some capacity, but not strictly as period etiquette would have dictated.”

As Johnson regularly breaks the fourth wall and speaks directly to the audience through monologues, Agertoft wanted to keep her wardrobe uniform and minimal so as to not detract from her narrative.

“A timeless feel was key when approaching the looks for Anne,” Agertoft said. “It is her story from her point of view, and the directness to the camera meant that we needed to be mindful that the costume doesn’t get in the way of these exchanges with the viewer.”

Elliot’s minimal wardrobe was also meant as a way to reflect her differences from her sisters. While Elliot was more down-to-earth and reclusive and wore darker-colored dresses, her sisters welcomed social engagements and attention, and used them as an opportunity to bring out their embellished and bright dresses.

“The overall idea was that Anne would have favorite garments that she treasured, compared to her sisters who would relish as many changes and fuss as possible,” she continued. “The minimal approach was challenged by the flow of the story and a few more hero garments were needed, but hopefully we have managed to achieve some sense of favorite garments.”

As the latest Jane Austen film adaptation, Agertoft believes that the late author’s work has resonated with audiences for so long because of her novels’ relatability.

“Jane Austen’s books have a timeless quality about them, which makes them ideal for adaptations,” Agertoft concluded. “I think Jane Austen hits a nerve within most of us. Weirdly, it can sometimes be easier to appreciate this in a period drama. Maybe it is that we are more accepting when there is a distance to our own reality.”