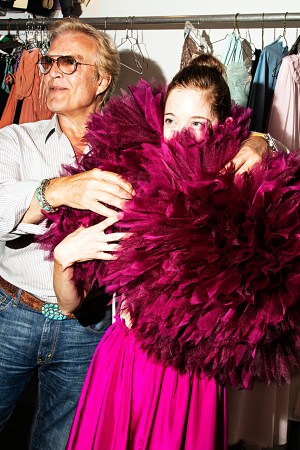 Peter Copping’s vision of café society at the landmark Rainbow Room will jeté across the stage of Lincoln Center’s David H. Koch theater on Sept. 30, when his costumes for New York City Ballet’s “Thou Swell” debut at the company’s gala performance.

On the heels of unveiling his second runway collection for Oscar de la Renta, the house’s creative director has carved out time to reenvision costumes for the Peter Martins-choreographed piece — transforming the performance’s monochrome wardrobe into a dramatic array of bright colors, textures and silhouettes.

In “Thou Swell,” which premiered in 2003, Martins utilizes a Richard Rodgers score to illustrate a candid evening at the Rainbow Room, with principal female dancers impersonating four nightlife archetypes: the flirt, the queen, the romantic and the vixen.

Amid a frenetic fitting at the New York City Ballet’s in-house costume shop on Thursday, with a fleet of industrial Jukis buzzing at full velocity, Copping said his primary objective is for the designs “to have a certain level of sophistication. It has to reflect the glamour and refinement of that period when the Rainbow Room was in its heyday.

“I really wanted to make it about color. The young flirt, she is in green with fringe and feathers with a real sense of freedom, whereas the queen is much more refined and dressed in pale blue, sort of a ballgown, with a cape,” he said of the costumes’ character concept.

As Copping has learned through his partnership with the ballet company — his first involving stage costumes — ballet ensembles require an entirely separate set of technical design codes than those for the runway. At last week’s fitting, WWD observed Thou Swell’s principal “romantic” Teresa Reichlen requesting a lower neckline and larger under-arm gussets so that her costume’s sequined fabric would not irritate her skin when elevating her arms in the fifth position.

Copping took a particular interest in the specimen of tulle used for the queen character’s skirt, played by the company’s famously expressive principal Sara Mearns — who commented that it would be difficult to dance in the costume’s stiff netting. NYCB’s costume shop director Marc Happel, as well as Martins, pulled alternate bolts of tulles in varying degrees of stiffness for review. Upon swiftly ripping the sample skirt off its bodice, they decided it would be best to fabricate Mearns’ skirt in a weight similar to the romantic tutus of George Balanchine’s famous ballet “Serenade,” in which languid layers of sheer netting gracefully float across the stage, along with their wearers.

“The one big thing [I’ve learned about here] is really the movement and how dancers move, and thinking about the fabric — we consider that in fashion, but this is really going to be judged on [how well it moves],” Copping said of the challenges associated with designing for the ballet. He added: “Something that’s also been an important factor here, and in some ways surprising, is that I’ve learned how to judge things from a distance, because I think in fashion we look at things in such minute details, but here, things are going to be judged from 20, 30 meters away — so it’s important for [the costumes] to have an impact from the distance.”

In order to achieve far-reaching, impressionable designs, Copping has designed floor-length capes for Reichlen and Mearns, an enormously pluming fuchsia boa to accompany the production’s “vixen” (danced by Rebecca Krohn), and a dark-green marabou overcoat for its “flirt,” principal Sterling Hyltin. During the fitting, Martins requested that Hyltin pirouette to examine how her fringed dress would sculpt the shape of her lithe body onstage. After deliberation, Copping’s associate trimmed the dress’ layers to cut a leaner shape from afar.

Happel said he was impressed by Copping’s prioritization of movement and practicality in the costumes’ construction. “One thing that was really great about him, that I can’t say for all designers we have worked with, is that we gave him a DVD of the choreography and found out that he actually watched it,” he said. “He mentioned a few moments in the ballet of how a leg went up and how he would want the skirt to fall when that happened, he is really aware that this is not a design for the red carpet or the runway, and that he is designing for an athlete.”

Happel’s team has been constructing the costumes by Murad and Maeda remotely, communicating with the designers by Skype and phone calls. Both works will heavily rely on appliqué embellishments — Murad’s of lace and Maeda’s of an oversize, scalloped rick-rack.

Happel met with Marques and Almeida in London and decided that while “their signature jeans are very slouchy and low-rise, our compromise is that we would build them very high in the crotch and fitted in the hip for movement — it’s necessary,” he said. Their jeans will be accompanied by color-blocked, stretch-chiffon tunics — creating an ensemble that fits in well with Schumacher’s choreographic narrative for enacting street behaviors onstage.

At NYCB’s 2014 fall fashion gala, Schumacher’s first piece was paired with meticulously tailored costumes by Thom Browne — a partnership that earned both parties critical acclaim for their ability to illustrate social realism through the fantastical language of dance.

And for Justin Peck’s new work, Opening Ceremony’s Leon and Lim have designed cutout unitards that have been engineered to interact with the NYCB wunderkind’s choreography. “They approached this whole project in a very scientific, kind of conceptual way, basically mapping it out completely so whenever someone’s hand touches another dancer’s body, there will be a flesh insert there, so they grab flesh instead of color,” Happel explained of the process.

As for Copping, when the curtain rises on Sept. 30, he anticipates feeling “very excited, and probably more nervous than one of the fashion shows, I’d imagine. If I counted the amount of fashion shows I’ve done throughout my career, it’s kind of hundreds, but this is the first time it’s onstage and in front of thousands of people.”