The label has unveiled its first adult collection designed by Maison Kitsuné. 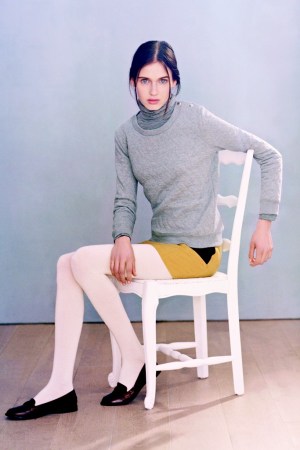 PARIS — As it celebrates its 120th anniversary, French children’s wear brand Petit Bateau is freshening up.

The label this week unveiled its fall men’s and women’s adult collection, the first designed by its new artistic directors, Gildas Loaëc and Masaya Kuroki of hip label Maison Kitsuné. The duo had previously designed two capsule collections for Petit Bateau, including a trio of anniversary pieces that went on sale mid-February.

“It’s all about putting a new twist on tradition, with a modern rewriting of iconic products,” said Christian Blanckaert, chairman of Petit Bateau. “It’s good to celebrate this milestone with a jolt of electricity.”

Loaëc said that for their debut collection for the brand, Maison Kitsuné worked on iconic products like sailor-striped anoraks and jersey pieces, tweaking them to add a streetwear edge. Dotted throughout are logos culled from the archives, alongside fashion-forward pieces like cropped duffel coats.

“It’s not about crazy upheaval. It’s more about updating fabric weights and fits,” Loaëc said. “We want to bring a hint of cool to the collections and prompt people who regularly visit the brand into making impulse buys.”

Maison Kitsuné, whose activities range from clothing to music and interior design, is expanding not only its global presence, but also its range of activities. It recently opened a store in Tokyo incorporating the first Café Kitsuné, and Loaëc said they plan to open a second Café Kitsuné at an undisclosed location in Paris.

Nathalie Lempereur, director of collections at Petit Bateau, said the designers were brought in to make thebrand relevant to young mothers with fresh colors and shapes. “It’s a much more contemporary silhouette which draws on our roots and has a very strong identity,” she said.

Petit Bateau is also planning a series of events to mark this year’s anniversary.

On April 17, it will turn over its store in the French capital’s first arrondissement to children’s illustrator Hervé Tullet, who will redecorate the space with the help of a group of kids. From April 18 to May 4, it will turn into a workshop where customers can have a Tullet design of their choice transferred onto Petit Bateau clothes.

On May 13, Petit Bateau will unveil an exhibition of photographs by Stéphane Remael in Troyes, featuring workers from the local factory where it develops its products and weaves and dyes a large proportion of its jersey fabrics.

The company posted revenues of around 300 million euros, or $386 million, in 2012, up more than 4 percent from the previous year. “In a difficult context, we had a very positive 2012, but obviously we are now facing a difficult 2013,” he said, noting that the late arrival of spring in Europe dampened sales in the first quarter.

Europe, including France, accounts for 65 percent of sales, according to Blanckaert, who noted that the brand has a strong presence in Italy, Germany, Spain and Belgium, in addition to Japan, Hong Kong and Singapore.

“The challenge today is to develop our digital strategy and conquer new territories,” he said. “We are looking at the whole world, with no particular geographical focus. We can sell Petit Bateau in South America or anywhere else. We have been established for 120 years and I think that in 120 years, it will be a global brand.”