The French designer went back to his Seventies sportswear roots. 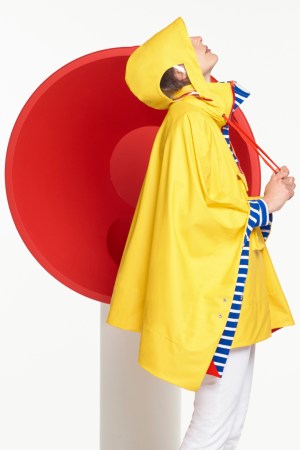 PARIS — Petit Bateau has tapped Jean-Charles de Castelbajac to put a fresh spin on house classics like the striped top and sailing jacket.

The designer, known for his Pop Art-inspired creations and love of primary colors, has designed a capsule collection of a dozen items for children and adults that will go on sale at the Petit Bateau store on the Champs-Élysées and online on Oct. 12, before rolling out to some of the brand’s other stores on Oct. 19.

They include a top and a dress where the horizontal striped jersey has been spliced together diagonally to create a chevron pattern; a bright yellow rain poncho with see-through panels set into the hood; and tops featuring de Castelbajac’s whimsical drawings of characters including a young sailor.

The latter illustration was inspired by his seven-year-old grandson Balthazar, who also modeled for the collection’s look book, which was photographed by his dad Guilhem. “It’s a family affair, like the song says,” quipped the designer, also known by his initials JCDC.

He tapped into memories of childhood vacations in Brittany, in particular his first girlfriend, who wore striped tops and a yellow waxed jacket to go sailing.

“There is a mixture of femininity and functionality. I came back to the roots of my style at the beginning of the Seventies, when I was doing a lot of jogging suits and dressing Farrah Fawcett,” de Castelbajac explained. “It’s all quite retro-futuristic. It’s very fresh,” he added.

The designer asked fledgling local band Presque l’Amour to write a song for the collaboration. “It’s a sentimental electronic melody called ‘Makeup’ that tells the story of a girl who keeps her boyfriend waiting on the other side of Paris because she can’t decide what to wear. In the end, she opts for Petit Bateau,” he said.

Patrick Pergament, chief executive officer of Petit Bateau, noted it was the first time the brand had commissioned a song.

“We have to entertain our clients and surprise them, and we have to be surprised ourselves. You need to give free rein to creativity, and sometimes that goes beyond the framework of pure products,” he said, adding that de Castelbajac’s enthusiasm was infectious.

“He produced some 200 to 300 pages of drawings. It was just unbelievable. We had to make some very difficult choices, because when you ask Jean-Charles to work on a capsule, he produces enough material for 10 collections, each drawing more marvelous than the next,” Pergament added.

De Castelbajac said he would get another chance to unleash his artistic side with live painting sessions at Petit Bateau flagships in Tokyo and Osaka in the fall. He will also bring his show “Fantômes,” which blends fashion, painting and electronic music, to Milan Fashion Week next September.

Meanwhile, Petit Bateau is continuing its collaboration with illustrator Hervé Tullet on children’s painting workshops. Following the giant performance held at Tokyo’s Museum of Contemporary Art in May 2014, a similar event was planned in Shanghai.

The brand, which makes more than 50 percent of its revenues overseas, will open seven stores in China this year and at least 6 in Japan, Pergament said. Although he would not disclose figures, he said the label was outperforming the flagging children’s category.

“We are seeing positive growth in virtually all of our markets,” he reported, noting that the economic outlook was improving and recent collections had been well received. “Today, our focus is squarely on developing international markets outside the euro zone, and the collaboration with JCDC is a step in that direction.”