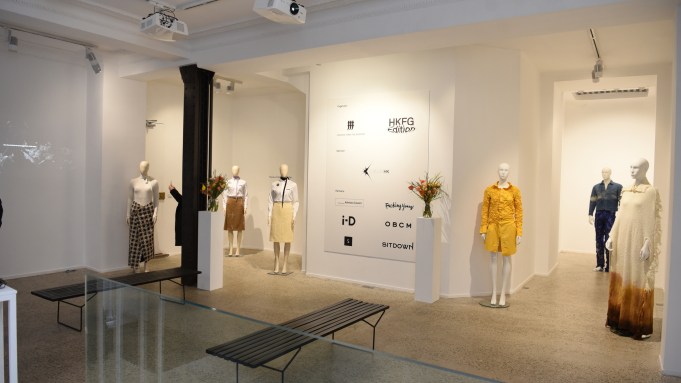 PARIS — “Even these peculiar times dominated by COVID-19 can’t stop Paris from being the eternal capital of fashion,” wrote Moquee Cho, project director of Korean designer showcase The Selects.

While ongoing travel restrictions precluded any physical events, the showcase wanted to make sure its selection of nine designers — including 2019 Woolmark Prize finalist Youser — were seen around the globe, splashing campaign visuals and an invitation to visit the digital showcase across screens in New York City’s Times Square, as well as staging a wild postering campaign across Paris. In addition, a one-month-long digital showroom was held on The New Black platform, concluding on Friday.

“In fashion, the present is the most important moment,” Lee added. “But it’s also the perfect time that allows us to prepare for the future.” Joggers alongside the Seine may not have been familiar with Hankim’s Op Art adorned experimental silhouettes, the casual urban looks of Studio K or unexpected layering of Eenk, but they would certainly remember the striking rows of posters with the Eiffel Tower as a backdrop.

While Portugal-based designers are well represented throughout the fashion runway season, with brands such as Marques’Almeida and Ernest W. Baker as regulars on official calendars, the Portugal Fashion project, supported by the country’s National Association of Young Entrepreneurs, felt the full attention of press, opinion makers and buyers was essential to further their goal of spreading the word on made in Portugal design. “We had to continue the work we’ve been doing, and not to miss the slot and the opportunity to show on the official calendar in Paris,” wrote director Mónica Neto.

In collaboration with ModaLisboa, the organizers of Lisbon Fashion Week, they proposed “Three of Us,” featuring the collections of Ricardo Andrez, Constança Entrudo and Maria Carlos Baptista, who won the Bloom new talents competition in 2020.

“As an emerging designer, it’s really important to show in any way we can,” said Alex Po, who designs the Hong Kong-based Ponder.er with Derek Cheng. The label will stage its first runway show during Shanghai Fashion Week in April, but before that, a trio of their sustainable and craft-intensive silhouettes were in a gallery in the Marais, under the umbrella of HKFG, the international program supported by nonprofit organization Fashion Farm Foundation. The twisted officewear of coed label The World Is Your Oyster, whose film was directed by Jourden’s Anais Mak, was also available.

Staging an exhibition of selected fall silhouettes alongside the season’s films was essential for the HKFG. “Fashion is still a physical and tangible art. The craftsmanship, the details, the fabrics and fabrications cannot be replaced by digital just yet,” said FFF’s project manager Grace Leung, who stressed that both aspects were nonetheless equally important.