The 2016 showcase featured some 250 looks, including designs by two seniors who showed at New York Fashion Week. 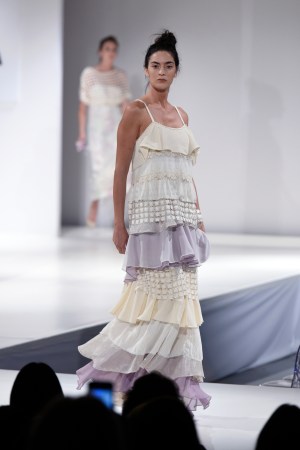 University president Stephen Spinelli Jr. presented Ternosky, a 2000 alum, with the award, lauding his achievements in building the Obey Clothing streetwear line, which is based on the work of Shepard Fairey, the artist best known for his “Hope” poster of President Obama. Previous winners of the Spirit of Design award, first given to Geoffrey Beene in 2002, include Tommy Hilfiger, Nicole Miller, John Varvatos and “Project Runway” season one winner Jay McCarroll, who was in the audience, looking very pilgrim-esque in a wide-brimmed hat.

In his acceptance speech, Ternosky humbly expressed his appreciation, then moved onto words of inspiration for the burgeoning designers. “This is the epicenter of something great that’s about to happen,” he told the graduating class. “We’re at a really pivotal point in the fashion history where there are no longer rules. Rules in fashion are meant to be broken — and today’s the day they’re meant to be broken by people like you. So to you changers of the fashion world, I say don’t be average. Be unique. And that begins right here on the stage, right now.”

More than 20 red gowns created for the American Heart Association’s Go Red for Women campaign were also shown, with a red shantung peplum dress adorned with tassels being a highlight. And in a nod to the evening’s honoree, the university offered the new Mike Ternosky Obey award for Most Creative Collection.  Cassie O’Toole also won this one, for another multi-colored, shredded-textile collection inspired by blown glass.

As he did last year, TV fashion authority Carson Kressley, a member of Philadelphia University’s board of trustees, kicked off the show to the audience of 1,800 — a mix of industry insiders and up-and-coming designers. “I’ve had the opportunity to interact with the students, who are just so talented and dedicated, it’s thrilling. Plus, it’s a great place to poach talent and find people to work for me,” said the cheeky style pundit. As he left the stage, Kressley urged the crowd to “be really loud during the show, they love the applause. It makes the models smile, which is a real feat,” he quipped.