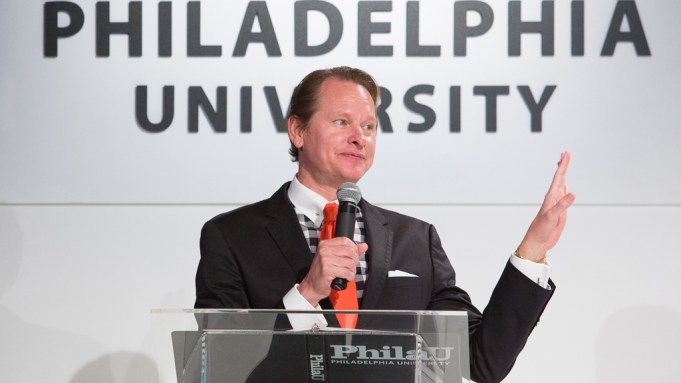 The PVH Corp. Philadelphia University Annual Fashion Show presented the most innovative and creative works by the school’s design and textile-design students. Held on Thursday night at Moulin at Sherman Mills — a transformed Civil War-era textile mill that’s now a study in post-industrial chic — it was hosted by Carson Kressley, a member of Philadelphia University’s board of trustees and honorary chair of the event.

Kressley kicked things off with quips to the audience of 1,000 — a well-dressed mix of fledgling student designers and industry insiders, with representatives from Macy’s, Urban Outfitters and Nordstrom perched in the front row. “What’s so great about this fashion show is that it focuses on the amazing workmanship of the students,” said the notoriously cheeky style pundit. “This show is so authentic and legit that there’s no food backstage and the models are angry. It’s just like New York Fashion Week.”

This year, senior fashion design students collaborated with textile design students to create custom print, woven and knit fabrics made in the school’s state-of-the-art textile studios. About half of the night’s 250 looks incorporated these one-of-a-kind fabrics.

In addition to the senior’s innovative capstone collections, the event also showcased two student collections previously shown at New York Fashion Week at the Emerging Designer’s Collective runway show, and 20-plus red gowns created for the American Heart Association’s Red Dress event. The Stuart Weitzman Most Red Carpet Ready Award went to one such gown — a deep red number with form-framing cutouts and feathers designed by Lori Petrashune, who was inspired by Cy Twombly’s painting “The Fire That Consumes All Before It.”

Other awards included the Fashion Industries Association Best of Show prize, which went to Kayla Donovan’s ethereal, psychedelic chiffon gown; The Macy’s Overall Excellence in Design and Education award, given to Jenna Michel and Taylor Bergeron for their bridal collection inspired by the sinewy twists of topiaries and vines; and a gender-bending sportswear collection designed by Tia Pion that showed oversize sports jerseys and a vest with an ironic unicorn graphic that nabbed the Best Senior Collection award.