Topshop owner plans to “personally get behind two or three designers.” 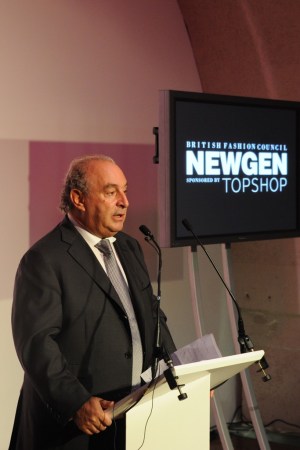 LONDON — Sir Philip Green is ramping up his support of emerging, London-based fashion talent with new plans to build a business and marketing structure around a select group of young designers.

During a news conference to kick off London Fashion Week, the owner of Topshop and Topman pledged a further 10 years of the retailers’ NewGen sponsorship.

This time however, Green said he plans to shift his support of young talent up a notch by helping a select few designers through every stage of the business, from manufacturing to retail.

“This time, we want to go for a complete 360 degrees, join up the various parts of these designers’ businesses in a much better way,” said Green. “The designers are already creative and they’re already manufacturing here — we want to get them focused on the business side”

Green said his goal was “to personally get behind two or three designers,” and to make sure they continue to manufacture in the U.K. and help them to sell worldwide.

Green certainly has the means: His Arcadia Group owns 2,500 retail units in the U.K. alone, and the company posted sales in 2011 of 2.68 billion pounds, or $4.23 billion. Dollar figures have been calculated at current exchange.

For the past 10 years, Topshop and Topman, with the British Fashion Council, have been bankrolling the NewGen fashion-week sponsorships, which help emerging designers put on catwalk shows or presentations.

The scheme has been in place since 1993, and past recipients include Alexander McQueen, Clements Ribeiro, Matthew Williamson, and Giles Deacon. Among this year’s recipients are David Koma, Holly Fulton, and Christopher Raeburn.

Neither Green nor the BFC releases any financial details of the sponsorship scheme.

During the conference, the British Fashion Council presented a paper, “Future of Fashion: Strategic Considerations for Growth,” about the challenges facing the industry in Britain, as well as opportunities for employment and manufacturing.