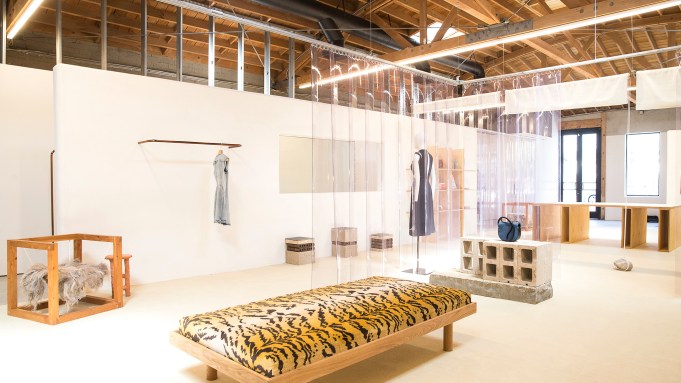 The designer returns to his pre-3.1 Phillip Lim stomping grounds for the opening this week of a 5,000-square-foot concept store at 734 East 3rd Street in downtown Los Angeles’ Arts District.

“My old studio is Bestia now,” Lim said, referring to the restaurant, touted for upping L.A.’s dining scene when it opened in 2012. “The rent for two floors was $6,000 20 years ago and now it’s like…crazy.” Bestia’s menu features a $120 rib eye, so it’s safe to say the rents have gone up since Lim was designer of the now-defunct contemporary line Development.

Lim lived and worked in Los Angeles before moving to New York in 2004 to found his signature brand.

Lim’s store is just off the prime intersection of East 3rd and Traction Avenue, which has for several years attracted artists, foodie spots and bars, but has only recently seen an influx of retail.

Some might see it as a well-thought-out retail strategy, but for Lim and his business partner and chief executive office Wen Zhou, it was more instinctive versus practical. After all, the Arts District hardly boasts the foot traffic of streets like Melrose Place, Melrose Avenue, Robertson Boulevard or Abbot Kinney Boulevard.

“It was quite spontaneous,” said Lim of their decision to open the store, noting he only signed the lease a few months ago. “Our lease was coming up on Robertson, where we had been for seven years, and it felt like it was time to try something different. It was us always taking the hard route of trying things first, and that challenger spirit that sometimes pays off and sometimes doesn’t. This space came up and I was like, ‘Oh my God, I used to have all my meetings right there 15 years ago. It felt like a déjà vu and it felt right to come back.”

Lim said the store, which is unlike any of the other 15 boutiques he has worldwide, is also a reaction to fashion and retail’s current malaise. “I’ve never felt fashion to be so unfashionable as it is today in the sense that [fashion used to mean that] people actually appreciated and desired real things, new things, things that have no specific purpose other than true desire. ‘Fashion’ is very popular right now, but a different definition of it. It feels so manufactured and so Keeping Up With the Joneses.”

Lim calls that “relentless” pace a result of the tech revolution and big money owning fashion. “When people talk about how the future is replaced by technology, I hope not. I hope we continue to use technology for what it is to make life more convenient and efficient, but never to replace that intangible magic.”

Lim insisted on meeting face-to-face, at a newly built Café Gratitude in The Yards retail development just a few blocks away from his store. The SCI-Arc architectural school, the railroad track and the river used to be the only things here 20 years ago.

“When you are speaking to me, you see my facial expression you read everything else. It’s the same thing that prompted me to want to go back downtown and do this concept here,” he said.

The result is a raw space somewhere between a gallery and a residence, where furniture and home objects mingle with exotic cacti and a few carefully edited men’s and women’s pieces.

“When you see it, hopefully you will feel like something incomplete. I’m not interested in telling you what to do. I’ve always been a fan of the in-between and the journey and leaving things to actually promote and provoke a conversation. I’m just going to build a couple of walls and you interpret,” said Lim. Indeed, he did only build a few midheight adobe walls within the space, an homage to his love of Spanish architecture. Nothing is closed off, there are several window openings in each wall, which give the sensation of walking through a Potemkin home on a movie set.

A still-unfinished commissary area in the back leads to a walled patio with green trees, and the whitewashed brick facade will also receive the adobe finish in time for the early June store opening party.

Just as prominent as the clothes are items such as a RO/LU plywood desk and chair from Patrick Parrish Gallery, or horsehair sconces from Apparatus, two of Lim’s home décor partners along with Li, Inc. stationery, M. Crow ceramics and Mast books.

“It’s an open dialogue with self, my brand and other artists and artisans that I really admire and I feel like are doing exciting things,” he said. It’s also personal. A large green painting by artist Tyler Hays stands at the entrance.

“He is one of my most favorite furniture designers who’s an artist, too. I collect his furniture and he also started M. Crow,” Lim explained.

Some objects can be carried out and some must be special-ordered through the designers. “Is it part of the store or not part of the store? I’m opening it the way I used to live here, where I would have friends over, host, cook,” said Lim. “To me, that’s the L.A. experience. It’s about hosting creativity and inspiration.”

He continued: “It’s different from a lifestyle store because mostly everything in the store you probably don’t need. It’s not to complete your life, it’s just to bring back simple pleasures. It’s the opposite of trying to figure out the perfect answer to the next thing that makes sense in this crazy place.”

He hopes the pieces will ignite curiosity, desire — and hopefully, sales. “These artists, once you know about them, you are going to want to know more. That’s magic that gets killed when everything is so overproduced. It frustrates me to the point where it drives me to be like, ‘No, we have to take it back.’”

Lim has much to say about the state of retail today. “Marketing and big business has destroyed some of the romance. Like tech companies that are getting into fashion, like it’s socially conscious lifestyle. Absolutely not,” he said. “How can you be socially conscious when you are doing things at that type of volume?”

Like when companies disguise things to appeal to Millennials? “Bingo. The problem is they don’t dig deeper to the truth of it. They don’t have to deal with the dirtiness of how to negotiate humanity, when you are making clothes and you actually see the seamstresses and understand that, ‘Hey, we can’t charge below this price because they would lose the little life they have.’ I’m just so tired of hearing people speak about all this stuff and not going deeper. I think it’s time for creators to take back the space and take the time. It’s easier said than done because even though we’ve been around for a while, it’s like David and Goliath. We are privately owned. We do and die by the dress.”

Such conundrums fueled his concept. “It’s a big move for us because it’s a reaction to what’s really happening,” he said. “It’s quite scary still because we have limited funding and resources and at the same time we really are a company that champions creativity and integrity, and as naïve and boring as that sounds, those really are the priorities that drive the business. Keep who you are speaking to loyal and really speak to them instead of walking away from them.”

He admires Los Angeles boutiques such Mohawk General in Silverlake and Magasin in Culver City for “bringing in a good mix, not what’s expected in the community. That’s what bores me, when they say, ‘Oh, it looks really L.A.’ It shouldn’t. What’s the point?”

Zhou said their starting point was when “Phillip and I said, ‘Forget about a business plan or sku count or anything we learned about running a fashion business. Let’s just bring things together because we simply love it. We try to think about things in a different light because we’re still relatively a niche business. It’s still not something we took lightly. We had to make sacrifices, and it was either to build something we love or build something we can make money from, but we believe as a brand, and we are both over 40 now, we kind of have to do things that push us, not just do the safe things. It will open doors I think.”

For 3.1 Phillip Lim, its highest-grossing stores are in Asia. Its IFC Hong Kong store closed last month as the lease was up, but the company is hoping to open a location there at the end of this year. It’s also opening a store in Waikiki’s International Market Place in early June, which will bring the store count to 17.

Lim does have a backup should his fashion business ever go belly-up. “I’d be a farmer. I even figured out that because I like the beach, I’m going to be a seaweed farmer,” he laughs. More plausible, “I also have a huge interest in interiors. I’d love to work on a personal interiors project.”

That might not be far off, with the ease in which creative can reach out to one another on social media. “That’s the best part of it, right? We have to collectively understand purpose. Tech is amazing for logistics and efficiency and communication, but it can never replace creation.”