Sean Byrnes, Scavullo’s life partner and the sittings editor on most of his work, said the... 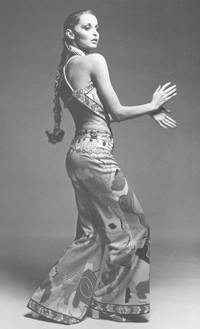 Sean Byrnes, Scavullo’s life partner and the sittings editor on most of his work, said the cause of death was a heart problem. The two were in Scavullo’s Upper East Side apartment Tuesday morning, preparing to go downtown to shoot CNN anchor Anderson Cooper when Scavullo said he was feeling faint. Moments later he was dead.

For more than 50 years, Scavullo was one of the most well-known photographers in fashion. He presided over advertising campaigns for Calvin Klein, Versace and Valentino and shot magazine covers for Time, Life, Seventeen, Andy Warhol’s Interview, Carmel Snow’s and Anthony Mazzola’s Harper’s Bazaar, Vogue, New York and, of course, Cosmopolitan, where he was the key photographer from 1965 to 1997.

Scavullo born in Staten Island in 1921 (his book, “Scavullo Photographs, Fifty Years,” says he was born in 1929 but that was a fib, said Byrnes, to help him keep working). His father was a well-off businessman who owned a utensils company. When he was 11, Scavullo and his family moved to Manhattan.

As a child, Scavullo fell in love with the world of movies and became obsessed with the magazine photographs of Greta Garbo and Marlene Dietrich, the latter of whom he later worked with. By the age of eight, he was dressing his sisters up as film stars, and attempting to re-create the kinds of photos he saw. He did not know the names of the photographers, Byrnes said, but he could replicate their lighting, even in Staten Island.

“Ever since I can remember, I have loved looking at beautiful and glamorous women, probably because they made up for what was missing in my middle class mother and sisters,” Scavullo told WWD in a 1971 interview.

His father was not thrilled with his son’s obsession, but it didn’t seem to matter.

At 18, he blew off going to study hotel management at Cornell University. His career in photography began when Vogue hired him to assist Horst in 1945. Two years later, he shot his first cover, for Seventeen Magazine, and a contract followed. In 1950, he began working for Mazzola, who was then at Town & Country. The two collaborated for several decades.

This story first appeared in the January 7, 2004 issue of WWD. Subscribe Today.

In 1965, the call came from Helen Gurley Brown, who had been named editor of Cosmopolitan that July.

“I used other photographers for a few issues because I was new to the magazine world,” Brown remembered Tuesday. “But once Francesco came into our office, that was it. He was just superb. He was almost like a movie director in what he did. At that time, women in Vogue, Bazaar, and all the women’s magazines looked snooty, in my opinion. Haute. They were not friendly and loving. I didn’t want their look. He and Sean Byrnes picked the models. I never had to tell him who. He knew which models to get and Sean got the clothes.”

Indeed, Scavullo became associated with the Warhol era and Studio 54 in the Seventies, during which time he was widely credited for helping to launch the careers of proto-supermodels like Gia and Iman. Over the next 20 years, he continued taking high-voltage shots of women as Patty Hansen, Veruschka and Iman were replaced by models like Cindy Crawford, Linda Evangelista, Stephanie Seymour and Naomi Campbell. He also shot celebrities, ranging from Madonna to Divine to Paul Newman.

In fact, he seemed to shoot for almost any magazine that loved women and celebrities, including the ones where they took off their clothes, like Playboy and the Sports Illustrated Swimsuit Issue.

“The model has to have enough respect for me to let me get past the face and into the woman. But it is not always possible. That’s some of the reason for my using the same models again and again,” Scavullo said in the 1971 WWD interview.

“He was the apex of that glamour girl photography,” said Kal Ruttenstein, senior vice president of fashion direction at Bloomingdale’s. “A couple of decades of women looked up to his idea of glamour, beauty and sexiness. They all wanted the Francesco touch. The Cosmo covers were the tip of the iceberg because he knew how to take the best of the girls and get it onto the pages of magazines. The lighting was perfection.”

His career also reflected the changing atmosphere of fashion, as men turned into sexual objects and black women finally made it onto the pages of fashion magazines. His shot of a buck-naked Burt Reynolds sprawled out on a bearskin carpet became the first male centerfold for Cosmo and helped usher in the mainstreaming of homoerotic photography techniques.

“He shot the first cover of Vogue with a black woman, Beverly Johnson, in 1974,” said Byrnes. “That broke down a lot of barriers. Between Polly Mellen, Way Bandy the makeup artist, and Francesco, she got herself the first cover.”

“I remember the man,” said Diane Von Furstenberg, whom he shot for the cover of Newsweek in her famous wrap dress. “He was a very generous New Yorker who for me was the first image of the fashion world. His photography was very flashy and very glamorous. It was the early Seventies with the hairpieces, the eyelashes and lots of makeup. For me he brings to mind the original Wilhelmina.”