Pick of the Glitter

Retailers gearing up to attend this season’s WWDMAGIC said they are going with a singular focus in mind: to uncover unusual lines that their competitors don’t carry.

“We always look for other vendors who don’t do other... 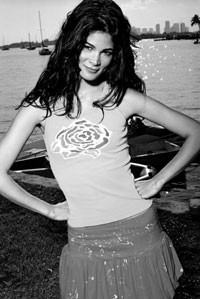 Retailers gearing up to attend this season’s WWDMAGIC said they are going with a singular focus in mind: to uncover unusual lines that their competitors don’t carry.

“We always look for other vendors who don’t do other trade shows,” said Fraser Ross, owner of Kitson, the of-the-minute contemporary boutique on Los Angeles’ Robertson Boulevard. “Last year we found HiHo, one of our most profitable sweatshirt lines. But it was a juniors’ line.”

Indeed, many retailers said the real trick to successfully shopping MAGIC was a good pair of comfy shoes so they could walk the entire show. Their best finds, it turns out, came from areas they don’t usually shop.

“We’re looking for the bizarre, different, interesting and fun,” said Fred Levine, co-owner of M. Fredric, a contemporary women’s specialty store chain that operates 19 locations in Southern California. “[They’re] things that might not be categorized as contemporary, but we make it contemporary when we merchandise it in our store.”

Some of the items that Levine has been able to successfully integrate into the store include T-shirts from predominantly juniors’ resources John Deere and Harley-Davidson. And although these items might not serve as core merchandise, they often give the store its real flavor, said Levine.

“It’s really the fringes of your merchandise that have the most appeal,” he explained.

MAGIC public relations manager Ernae Mothershed said store owners such as Ross and Levine make up more than 60 percent of attendees who are crossover buyers shopping, for example, not only contemporary lines but tween and teen lines as well.

“Obviously they need something to distinguish themselves from their competitors,” said Mothershed. “And one of the overall things they come to find is new resources, whether that be new launches from an established line or brand-new resources. Many such companies are only going to show at MAGIC and use it as a launching pad.”

Celebrities, in particular, have chosen MAGIC as the venue to launch their lines, and that’s key for store owners such as Ross who have found enormous success not only through their celebrity clientele, but through selling products either created by or adored by celebs.

Last year’s show saw the debut of lines from Anna Nicole Smith and Nicky Hilton, both of whom made personal appearances. This year Ryan Seacrest, Macy Gray, Will.i.am and Jessica Simpson will be launching apparel lines.

“I want to see what Jessica [Simpson] is doing,” said Ross. “She’s a big drawing card.”

Accessories are another hot category that retailers have on their shopping radar at WWDMAGIC.

Scoop co-owner Stefani Greenfield said she goes in search of bags, belts, shoes and other accessories, and has found everything in the past from beach bags featuring figure drawings to glitter toe rings.

“I find fun accessories for the Vegas, Miami or East Hampton [N.Y.] stores,” said Greenfield. “If you find one great line, it’s worth it.”

Keeping the competitive edge has become even more important as retailers expand and open new doors in a climate that has been particularly favorable to the independent store owner.

Scoop, which now has eight locations, opened its latest one in October at the new The Forum Shops at Caesars Palace. The first Chicago location opens this fall, and the third New York store in the Meatpacking District will open in June of this year.

Many retailers have said the furor over denim has fueled their rapid expansion, particularly the demand for specialty denim. While they are looking for more of those specialty resources at WWDMAGIC, they also are looking for the items to pair with the looks.

John Ducette is co-owner of the Blue Bee store in Santa Barbara, Calif., and four other boutiques within a block of one another, including Blue Bee Jeans, which is dedicated to denim. The store will soon be moving to a larger location, and the old location will house Blue Beetle, a new men’s store.

He said where there is denim, there have to be unique pieces to pair with it, and that’s where MAGIC comes in.

“We’ve found a couple of our best resources at MAGIC, like the Old Gringo cowboy boots we carry, and a lot of times we’ll buy women’s from the men’s vendors,” he explained.

However, he added that he typically locates and buys from new contemporary resources at the L.A. market.

Joeanna Purdie, owner of contemporary boutique Sweetie in Seattle, said she, too, picks up most of her lines in Los Angeles and in New York.

“When I first went to [WWDMAGIC], I picked up some lines that were inexpensive,” said Purdie. “But a lot of the lines are not at the boutique level that my clients are used to, and the boutique shopper knows when it’s cheap.”

Mothershed attributes this faulty knowledge to its pre-Las Vegas Convention Center days, when tired retailers had to hop from different venues to take in the whole market. MAGIC consolidated all of the shows in August 2004 at the LVCC.

“By putting the entire show under one roof, that should alleviate the misconception that there isn’t a wide variety of resources available in every market,” she said. “Before we combined it under one roof, people only had the time to shop one show, but this has really helped everyone capitalize on their time.”

M. Fredric’s Levine said for him, having it in a single venue gives MAGIC an advantage over a market such as Los Angeles.

“The L.A. market doesn’t have the convenience of being under one roof where people can see all the lines easily,” he said.

While consolidation has helped tremendously, it’s still a big show that requires the eyes of several buyers to hone in on key items and trends. Scoop, which has almost 300 employees, is adding three new buyers — two for women and one for men — bringing the total to 13.

Even a store like Kitson, which has only one location, is planning on sending three buyers. Much of this is due to its brisk Web business, which is expected to account for nearly half of its sales by the end of the year.

Kitson’s Ross said he doesn’t see the need to add any more buyers to the roster.

“We want to focus and don’t want the backlash of having too many opinions,” said Ross. “We’re not a department store, but we certainly can start trends quicker than the department stores.”