There’s one way to get ahead of the competition: Roll out your spring 2013 collection three months ahead of the rest of the fashion world.

By Debra Bruno
with contributions from Lara Farrar
on May 22, 2012
View Slideshow 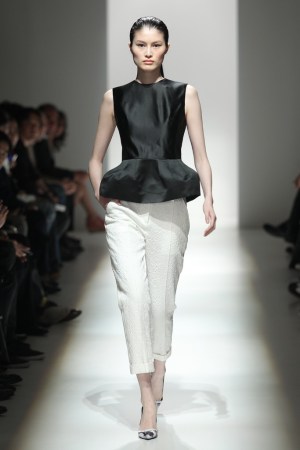 BEIJING — There’s one way to get ahead of the competition: Roll out your spring 2013 collection three months ahead of the rest of the fashion world, and do it in Beijing rather than Paris.

Pierre Balmain’s new collection, shown for the first time in the Yintai Centre here, debuted months before the normal timetable for two reasons, said Balmain Group president Alain Hivelin. First, the gesture served to “pay a tribute” to the company’s partners and potential partners in China, he said. In addition, it brought attention to the brand in a way it couldn’t have otherwise.

“I thought, we are ready to do it,” he said in an interview moments before the Tuesday show. “If I would have waited three months to present it on stage in Paris, New York, London, Milano, then it’s mixed with 200 or 300 brands.”

Torsten Stocker, Greater China partner at consulting firm Monitor Group, said, “I think this reflects the shift of demand from more mature to emerging markets, in particular China. It is only natural that brands are reacting to that and putting more emphasis on this market. However, I would not expect a landslide shift or anything like that, but more of a mix, with some brands introducing new collections in China first and others sticking to their existing approach.

“My sense is that as China takes a bigger role in many sectors, brands will no longer just be rushing in but instead trying to create a balance between their different markets,” he added. “Of course, there will always be exceptions, and for some brands, the center of gravity will move eastwards.”

“I think it is a good sign and beginning that international brands move not only their focus but also their stage in China to launch new products,” said Pierre Xiao Lu, author of “Luxury China, Market Opportunities and Potentials” and a luxury business consultant. “The consequence will be that related industries, such as media, buyers and production cycles, will follow the fashion show premiere move as part of their journey to China. It is a natural evolution of fashion and luxury brand market development. It is very important to build a station in China for this global industry. Brands have to be very close to their final clients.”

Pierre Balmain’s push into China means new stores opening before the end of the year in Nanjing, Hangzhou, Xian, Beijing, Shenyang, Chengdu, Ningbo, Jinan and Shanghai for a total of 15 units in China by the end of the year, divided between stores for clothing and ones for accessories. The company’s goal is to open some 35 Pierre Balmain clothing stores in China by the end of 2013, and another 20 locations for accessories.

The design of the stores will also be new. Richard Moreau, one of the architects who designed the units, said they will be influenced by the furniture and lines of the Fifties, with a touch of modernity thrown in.

Hivelin doesn’t seem much concerned about the frenetic pace. “Since we work much in advance for our collection to be able to be delivered on time,” he said, “I found out that in this industry, it’s first in, first out, so we have to deliver early. To deliver early you have to take your orders early. To take your orders early you have to be ready early. Being ready ahead of time helps us to manufacture, to have the trends, to know where to start to have the material and to be able to answer the expectations of our customers.”

The line will be produced in both Italy and China, said Hivelin. In Italy, Ittierre will be responsible for the production of all of the men’s ready-to-wear and much of the women’s collection, as well as worldwide distribution. In China, Pierre Balmain has entered into a joint venture with PB Fashion to handle the remaining production as well as distribution of the collection in Mainland China.

While the production schedule might be fast and furious, the collection drew upon Balmain’s history of using clean lines and a lack of fussy detail. The women’s collection of rtw would not have been out of place on a “Mad Men” set: eyelet blouses with waists cinched by wide belts, slim pants topped by simple blazers, and flared skirts that ended six inches from the floor. One inspiration for the show, organizers said, was the look in the French Riviera created by French actress Jeanne Moreau in the 1963 movie “La baie des anges.” The show, in a simple setting of white leather benches and a background of Eighties music from France, also highlighted some of China’s well-known models, including Sue He, Huang Xiaomen, Li Danni, Fu Zhenggang and Li Zifeng.

The simplicity of the styles carried over to colors, with solid blocks of coral red, hot pink and bright yellow paired with white or black tops or bottoms. The men’s collection was less conventional, with several jacket-shirt-shorts combinations that almost looked as if the pants had been left out and one suit in a fabric of giant polka dots.

For the most part, the look was casual and fun but not too risky: body-flattering shorts, a gold motorcycle jacket topping a white pencil skirt, and rhinestone medallions dotting supple leather dresses and jackets.

Chinese consumers are an increasingly sophisticated market, Hivelin said. “They don’t look at the prices so much. If they love it, they buy it. And they are more and more trendy.”