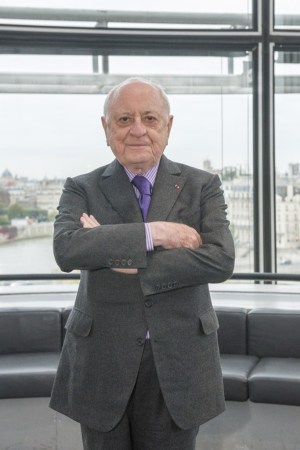 PARIS — If it were an album, you might title it: “Pierre Bergé: Unplugged.”

On Thursday, some 350 attendees — Betty Catroux, Vincent Darré and Doris Brynner among them — listened intently as Bergé delivered a talk in a packed room at the Arab World Institute, overlooking Notre Dame de Paris.

Bergé riffed on everything from Morocco, writing and Yves Saint Laurent to patronage, helping to fight AIDS and business. On the latter, he opined: “I have always had a principle: to do business fast and well; fast because it is boring and well because otherwise you have to redo it.”

“I lap up everything he says,” said Catroux after the talk. “I haven’t learned things, because he is family to me. But he always surprises me because he has such a sense of humor that the deepest topics have a certain lightness.”

Bergé responded to questions from Frédéric Mitterrand, former French minister of culture and communication. In the nearly 90-minute session, Bergé unleashed a stream of witticisms and instructive stories. Here, some highlights:

• On being a young man arriving in Paris: “I have never pried open doors, because I am shy.”

• On meeting Yves Saint Laurent: “I met him in 1958, coinciding with his first collection. He had succeeded Christian Dior in a media hullabaloo. I didn’t know anything about fashion. I told him — as many others did — that it was very good. That day, he met glory and Pierre Bergé. I don’t know which one of both has been more difficult for him.”

• On creating a couture house with Yves Saint Laurent: “I told him when he was at the hospital that Christian Dior had decided to let him go. He said that the only thing that was left to do was to create a couture house. I answered, ‘Naturally.’ I realized afterwards that I didn’t know anything about fashion or business.”

• On the two new biopics, “Saint Laurent” and “Yves Saint Laurent”: “The two films address extensively the difficulties that Yves had in his work and life. He thought he could escape them with false friends. In his departure allocution when he decided to quit his job, he spoke about his false friends that were alcohol and drugs. He said beautiful things in that speech. Sure, it wasn’t easy [to accompany him throughout this] but I have always considered that it was part of life. Nothing is shameful. When I am asked if such or such thing shocked me, I answer no. I am not shocked.”

• On collecting art: “We had a taste and requirements. As long as we had no money — at least, not enough money to buy the right things — we bought nothing. We were happy with empty walls. Then, the wonderful adventure of Art Nouveau started. We felt like gold diggers, we went here and there, spent our weekends bargain hunting; it was wonderful. The first thing was a statute by Brancusi. Keep in mind, objects are the homosexuals’ children …We had 733.”

• On buying Le Monde with Matthieu Pigasse and Xavier Niel: “I have always liked press. At 14 [as a student in La Rochelle, Western France], I founded a newspaper. I created another one [in 1949] called ‘La Patrie Mondiale’ that had two issues but such contributors [Jean Giono, Jean Cocteau, Albert Camus]. Le Monde was in trouble. I read Le Monde since its creation. I don’t always agree with it. But when Matthieu Pigasse asked me — I had never met him — I said yes right away. Le Monde is a common good, a press organization that has no equals in France.”

• On heading Le Monde: “[Le Monde] journalists keep reminding me that we signed a charter. I don’t understand an entire world is entitled to say what they think about a newspaper but its three owners. Anyway, we signed a charter, meaning I don’t intervene on the content. They do whatever they want. But through the highs and lows, I am very happy. Sometimes they veer off track, according to me — they say they aren’t. They are probably right.”