Designer declares that his fashion house is up for sale ahead of the retrospective display.

By Miles Socha
with contributions from Katya Foreman
on November 30, 2016
View Slideshow 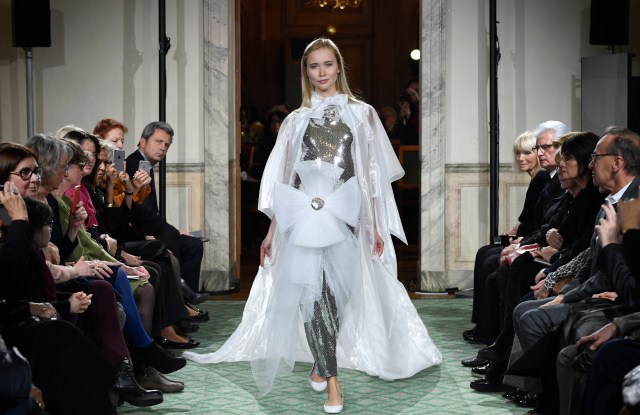 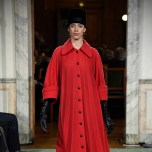 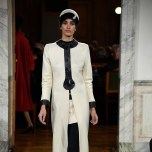 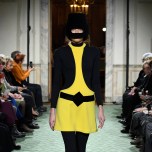 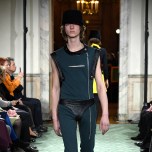 PARIS — Pierre Cardin practically upstaged his big 70th anniversary show here by declaring that his fashion house, founded in 1950 and synonymous with Space Age chic, is on the block.

“Of course, it’s for sale. You know my age,” the 94-year-old couturier told a scrum of reporters gathered at the Institut de France, home to the Académie Française that governs the language, plus four other academies.

Pressed for specifics, Cardin was elusive, as is his custom. “Come see me in my office next week,” he teased.

Besides, it’s not the first time the designer has said his business was for sale — Cardin has been preaching as much for almost the last decade and once insisted he would want at least one billion euro for his empire.

But putting a valuation on his closely held business would be difficult, and it could be a tough sell given Cardin’s waning influence — and a business model that runs counter to most European fashion houses today.

A pioneer in licensing since the Sixties, the designer had amassed some 840 deals in the early Nineties, generating $125 million in 1992, WWD reported at the time. These have been whittled back to about 350, mainly by eliminating overlapping categories, he said.

During a recent interview, Cardin insisted his business is growing, estimating worldwide retail sales of his products at $2 billion.

Wednesday’s show, which Cardin had characterized as the biggest honor of his career, was billed as presentation of “living sculptures” combining new and archival designs.

“I’m the first designer to have presented a fashion show at the academy in its 300 years of existence. Never in my wildest dreams would I have expected such an homage,” he said. “Fashion is also social, cultural, moral, with its own psychologies and philosophies.”

Lauding the designer’s “effervescence,” Érik Desmazières, president of the Academy of Fine Arts, called Cardin a “man of the world” and reiterated it was the first time the academy had received “the works of a couturier within these walls.”

“He is the academy’s sole fashion designer member. We are 45 in total and the rest are sculptors, engravers, or come from the world of cinema, photography or art,” Desmazières said. “It’s impressive. He is active in so many domains, he staged hundreds of major plays and shows at l’Espace Cardin, including plays by Bob Wilson and Marcel Marceau, and hosts an annual cultural festival at the Château du Marquis de Sade. Pierre Cardin always said he would have liked to have tried his hand at everything, and he has tried everything.”

The runway spectacle, still at the leisurely pace of the Fifties and Sixties, was preceded by a slick video montage of Cardin’s colorful career — here with Nelson Mandela, there wearing Buzz Aldrin’s astronaut suit — which underlined that this was an homage to a long career, rather than a fresh fashion statement. Indeed, many of the looks, which paraded through the grand meeting rooms of the Academy of Fine Arts amid busts of Henri Etienne and Jean Mabilllon, were shown last July when Cardin staged a show in Lacoste, France, and last September in the Yellow River Stone Forest in northwest China with its otherworldly mountains.

To be sure, the lengthy show demonstrated the designer’s range, from a demure swing coat that winked to his early days working with Christian Dior to a gleaming gold dress with discs at the wrist the size of a roadhouse waitress tray. Men’s wear, too, pinged from wacky leather jackets with shoulder protrusions, accessorized with menacing face helmets, to boxy business suits in jersey with pant legs that quivered like Jell-O.

In between were countless shift dresses, the shapes clean and gently flaring, the embellishments varied and demonstrative: discs of patent leather, undulating ruffles, gleaming bows or sprays of satin pleats. Heart-shaped pockets added a sweet touch to narrow double-knit dresses.

For his bow, Cardin donned his elaborately embroidered academician jacket, which he designed as a tailcoat, and lingered amidst the standing ovation.

“He brought a lot to fashion,” said Azzedine Alaïa, taking in his first Cardin show.

Bianca Brandolini was there, too, eager to witness the work of a designer she described as one of the greats, and among the last of his kind. “If you look at his work from years ago, it’s still modern,” she said, noting her grandmother, Cristiana, a sister of the late Fiat chairman Gianni Agnelli, wore Cardin.

By coincidence, she ran into the designer recently at the airport in Venice and they shared a long chat. He told Brandolini what drives him to keep designing clothes, furniture and stage costumes: “If you stop creating, there will be no trace of civilization.”

Brandolini said she has been conscripted by a brand synonymous with the Seventies: Loris Azzaro. She and Eugenie Niarchos are trawling through its archives and revisiting some of its iconic designs. They are to present the collection in January during couture week in Paris.

“It’s so funny that things made so long ago are exactly what one wants to wear today,” she mused.