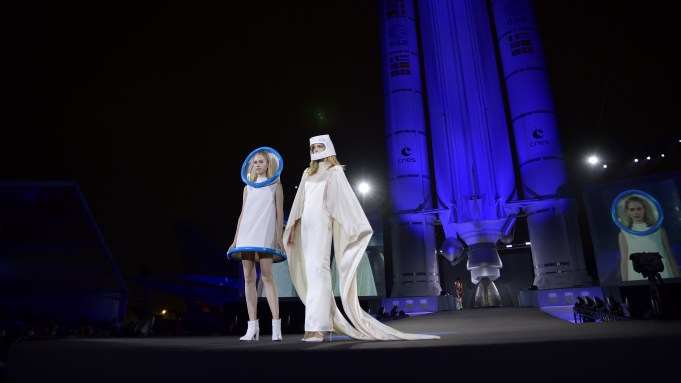 PARIS — The house of Pierre Cardin paid tribute to its founder on the one-year anniversary of his death with an outdoor show staged in front of a 177-foot-high replica of an Ariane 5 rocket.

The brand’s design team, led by Cardin’s great-nephew Rodrigo Basilicati-Cardin, presented some 200 creations on a runway set up on the tarmac of the National Air and Space Museum next to Le Bourget airport on the outskirts of Paris.

The show on Friday night, held in front of 800 guests seated in open plastic tents, was broadcast live to audiences in movie theaters in Moscow; Tirana, Albania; Dallas, and Mexico City.

The collection, titled “Pierre Cardin 3022,” began with several dozen outfits designed by Cardin, who continued to sketch until a few months before his death in December 2020 at the age of 98. They included a Little Black Dress with a double-hoop hem, A-line dresses with graphic cutouts, and draped satin evening gowns.

Many of the outfits, inspired by his original Cosmocorps collection from 1967, were fit for an episode of “Star Trek.” Think jackets and coats with triangular raised collars; two-tone knit all-in-ones, and geometric dresses accessorized with cosmonaut’s helmets, in a nod to a photograph of Cardin wearing Buzz Aldrin’s space suit at NASA in 1971.

“The theme this year is space. It was the theme dearest to my uncle,” Basilicati-Cardin said in an interview at Cardin’s headquarters across the street from the Elysée presidential palace in Paris.

The last time he saw the veteran couturier, they watched a television broadcast of the departure of four tourists on a spacecraft operated by Elon Musk’s Space X. “It was the only thing that put a sparkle in his eye,” he said. “He was the original Space Age designer.”

The display marked the kickoff of a busy year for the brand, which is on a drive to energize its license business as it aims to double revenues in the next five years. It plans to relaunch the pierrecardin.com website in February as a multipurpose online platform that will eventually include e-commerce.

Meanwhile, Cardin’s historic headquarters and boutique are closing for renovations, with plans to reopen at the end of the year with a new 6,450-square-foot museum on the first floor. In the meantime, the house is opening a temporary women’s store on nearby Rue de Duras, while men’s wear will be transferred to the Cardin store on Rue Royale next to its Maxim’s restaurant.

Following its renovation last year, the eatery is back on the fashion industry’s radar, hosting events including a Chanel high jewelry dinner during Paris Fashion Week, and the December wedding of influencer Camille Charrière and film producer François Larpin.

Basilicati-Cardin declined to disclose the group’s revenues for 2021, beyond saying they were up from the previous year. He’s spent the last 12 months reviewing the house’s 600 licenses, renewing roughly a quarter of the contracts in a bid to tighten control over product quality.

Cardin famously refused to delegate responsibilities, meaning that some aspects of his business were left unsupervised toward the end of his life.

“In the last five years, there was a little less attention paid to our licenses and production decreased. Now we are in full recovery, despite COVID-19, so I’m happy,” his heir said, noting that the company had shouldered the impact of the pandemic alongside its partners, some of whom have been in business with Cardin for three decades.

Basilicati-Cardin hopes the fashion show will provide inspiration for the brand’s roughly 200 licensees, and bring on new partners worldwide.

“I would like to have more Russian licensees,” he said, noting that Cardin at one point had 32 factories in the country during the Cold War. “They have the capacity, the talent and the power to do it, why not in a more Russian style? What’s interesting is to see how [licensees] interpret our brand. The Chinese do a very good job, for example.”

The European Commission said on Monday it has launched a formal antitrust probe to assess whether Cardin and Germany-based Ahlers Group, its largest European licensee, may have breached European Union competition rules by restricting the ability of licensees to sell Pierre Cardin-licensed products cross-border, including offline and online, as well as to specific customer groups. The house had no comment on the investigation.

Basilicati-Cardin works with a team of in-house designers, some of whom have been at the house for 35 years. “We produce between 15,000 and 18,000 designs per year,” he estimated, referring to sketches provided to license holders.

“They are really amazing. I knew them before, but they dealt exclusively with my uncle. Now it’s with me and we talk every day,” he added. “We feel united. We’re all roughly the same age, 50 to 55.”

An engineer by training, Basilicati-Cardin is encouraging the team to switch to more sustainable fabrics, noting that Cardin was inspired by space travel to experiment with new and technologically advanced materials.

“At the time, he was focused on synthetic, plastic materials. Now, I’m trying to get the whole team to work with synthetic materials that are upcycled or recycled,” he explained. “He was less concerned with environmental issues. He saw modernity.”

Basilicati-Cardin is also making sure the designer’s legacy is passed on to new generations, via partnerships with Istituto Marangoni and other fashion schools. Roughly half the guests at Friday’s show were fashion students. However, plans for a cultural center in Houdan, 40 miles west of Paris, have been put on standby for the time being.

Instead, Basilicati-Cardin is working on another tribute to Cardin to take place on July 2, the centenary of his birth. The executive said it would have been important to his great-uncle to see that his design studio remains active.

“He wouldn’t want us to toast him with Champagne. He’d want to know that young people had fun working for him. That’s the greatest satisfaction,” he said.