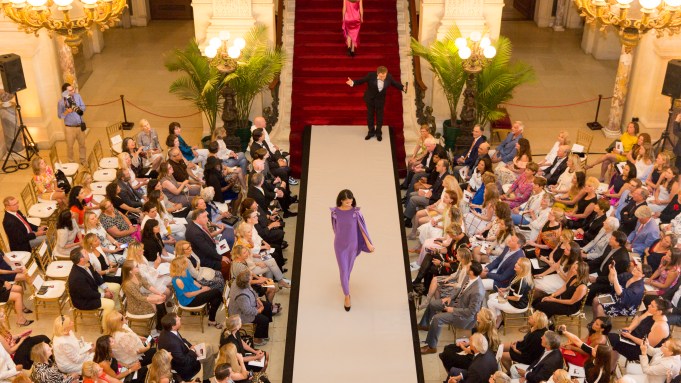 Pierre Cardin spent Saturday in Paris convalescing from a recent fall, but his fashion show at The Breakers in Newport, R.I., highlighted the work of a man who will not be stopped. A salute to his 70 years in fashion, the fund-raiser for the Preservation Society of Newport County sprang from an offshoot of a Cardin exhibition up-the-road at Rosecliff. After seeing photos of the Newport mansions from the Gilded Age, Cardin inquired about a show, too.

Always looking forward, even though he is weeks away from his 95th birthday, the designer chose 90 looks from the past 25 years such as a futuristic wedding dress with a superlight train and more on-the-street styles like a sleeveless black dress with an oversize modernist flower design, as well as new sunglass prototypes for Safilo. His director of haute couture Maryse Gaspard and his nephew Rodrigo Basilicata assured the crowd that Cardin curated the runway show and all of the music that master of ceremonies Matthew Gonder performed.

The state paid tribute to Cardin’s long stretching career with a certificate of recognition issued by Rhode Island Gov. Gina Raimondo. A recorded phone conversation from earlier in the day with Cardin was aired to extend his personal regrets to guests. They later filmed a “Happy Birthday” toast, cutting a futuristic cake.

After serving as the first employee at Christian Dior in what was then a 12-person shop, Cardin set out on his own in 1950. With 350 licenses, 500-plus new designs annually and distribution in 180 countries, the designer has no intention of selling his company, which he has always owned independently, Basilicata said. “He has said, ‘Now that I am 95, I don’t want to be a recluse. I still have lots of ideas.’ And he has had me start them.”

Cardin’s nephew continued, “For him, it is impossible to stop until the end, the last day of life. But surely, the House will go on.”

And Saturday’s show did, too, thanks to Cardin’s advance team including the scene stealer, Gaspard, who eyed every model’s turn from the second floor balcony. With 350 fashion shows to date including groundbreaking ones in Moscow’s Red Square and the Gobe Desert, Saturday’s was a first for The Breakers.

Before the first model descended The Great Hall’s impressive staircase, Gonder replayed a phone conversation with Cardin. Marisa Berenson sent her regrets from Marrakech, while other Cardin loyalists made the rounds — Diane Brown, Jana Jagoe and Elizabeth Leatherman. Fila president Jon Epstein and his wife Carol circulated, as did stylist Derek Warburton. By far, the crowd favorite was Cardin’s muse Gaspard who seemed to magnetically pull guests indoors and outdoors. In a spiraling black-and-white printed dress with billowing circle sleeves, she graciously posed for one photo after the next, effortlessly posing and somehow overpowering the view of the south lawn’s parterre garden.

The designer’s sense for the theatrical was a point of discussion during a preview of the new exhibition “Pierre Cardin: 70 Years of Innovation,” at another Newport mansion Rosecliff. Visitors will find a vignette from his famed restaurant Maxim’s, a sampling of Belle Époque caricatures by George’s Goursat (the artist knows as SEM) and a glimpse of Cardin’s “Bubble Palace” with unisex jumpsuits from the 1972 Summer Olympics nearby. “You see the evolution and the man,” Basilicata said, referring to Cardin’s style.

Balking at traditional advertising, Cardin has financed 500-plus theatrical productions to date with one about Marlene Dietrich slated for Los Angeles in December. “Everything inspires him. To be with someone who is that infectiously happy — with no Prozac — is really incredible,” Gonder said.

Noticeably more modern than the runway show, the exhibition featured such designs as “the Cardine” beside a late Sixties photo of Cardin fitting Lauren Bacall in a geometrically pleated minidress with thigh-high patent leather boots. There are hints of the influence he had on Jean Paul Gaultier and Paco Rabanne, who both worked for at him at one time. An image of The Beatles wearing the Cardin-created collarless jackets for their “Ed Sullivan Show” appearance is a nod to his men’s wear.

Cardin’s own words, written as wall text at Rosecliff, remind people what is yet to come, “The clothes I prefer are the garments I invent for a lifestyle that does not yet exist, the world of tomorrow.”