It’s chic to be fashionably frugal. While fashion spectacles still can run over $500,000, the days of extravagant spending are more or less on the wane. 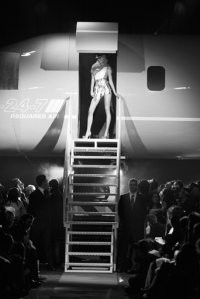 PARIS — If you end up sitting on a raw wooden bench during the European shows, it could be an artistic statement by the designer — or more likely it’s a sign of the times. It’s chic to be fashionably frugal these days.

As the international fashion pack winds down their stay in the gray of Milan and continues the Continental fashion season in Paris, stories abound about cutting back on fashion spectacles that can easily run up to $500,000 or more. Sure, there are still designers like John Galliano at Dior, whose extravanganzas reputedly cost millions to mount, and Dolce & Gabbana or D-Squared, who have tried to revive the era of the supermodel by casting Naomi, Linda and Eva this season. But the days of models not getting out of bed for less than $10,000 appear long gone — at least for the younger pack.

“Everyone’s cutting — or at least being budget-conscious,” said one major fashion show producer, who spoke on condition of anonymity. “It’s for all houses, big and small, and it hits very deep. We’re feeling the pressure. We’re being asked to find ways to save money across the board.”

With economic troubles compounding and political uncertainty mounting, no one can afford to spend flagrantly. Examples of cutbacks abound: Versace had thousands of roses strewn on its couture runway in 2001; last season it showed 10 dresses in its store. During the men’s shows in Paris in January, Yves Saint Laurent also went for a small showroom affair, rather than rolling out its big tents. And while Gucci covered its runway in white rose petals on Sunday, even its ceo Domenico De Sole admits cost-cutting is his modus operandi these days.

“I’m very guarded right now with budgets,” he told WWD just a few days ago. “I’m being very conservative and seeing what happens with the war.”

And it’s not only the designers scaling back. Retailers are keeping a tight rein on their travel budgets as well by downsizing their teams, shortening their stay in Europe or switching to less-expensive hotels.

A bigger concern for Stordahl this season is the strong euro, which makes European goods more expensive at a time when consumers are increasing price conscious. “We’re really challenging people [designers] to try and hold prices, particularly on like items,” Stordahl said.

Julie Gilhart, vice president of fashion merchandise at Barneys, said some of her store’s buyers shortened their trips to Europe, but more out of concern for the current world situation than out of cost considerations. “Our motto has always been that you’re to come in, do your stuff and go home,” said Gilhart. “Maybe our cost cuts ame beforehand.”

As for the brands, their attention is turning to the little things. Even if cost is rarely cited as the reason, the fact is more companies are bypassing the runways this time round. In Paris, Christian Lacroix, Gilles Rosier, Kenzo and AF Vandevorst are skipping the season, while in Milan, Samsonite and Genny were among those holding presentations instead of shows. A Prada spokesman said the Genny move “had nothing to do with cutting costs. We are repositioning the brand and thought it was more effective to hold a presentation.”

Filip Arickx, who designs AF Vandevorst his wife, An Vandevorst, and Samsonite also both denied the decision to skip a runway show was related to money.

“We felt it was time to do something different,” he explained. “We wanted to invite editors to see the film individually to get to know them. Doing another fashion show seemed a little impersonal for us now. We wanted to establish human contact. And in the end, the film will cost just about the same money as a show.”

As for Samsonite, “The decision to do a presentation has nothing to do with cutting costs — actually the presentation at the Diana Majestic Hotel [in Milan] was very complex and cost even more than a show,” said Beppi Fremder, president of Samsonite SpA. “We realized that we need time to explain our products — at least three minutes per item — and that a 20-minute runway show is just not enough. Also, it’s harder to show our whole product range, which obviously includes luggage and travel accessories, on the runway.”

And while some houses will mount the same extravaganzas they always do, producers assure that suppliers will all have been squeezed for the best possible deal, from the guy who rents lighting equipment to models to hair and makeup artists. Negotiation is now the name of the game.

Some of the changes might go unnoticed. Instead of velour backdrops or seat cushions, a design house might go for cotton. Makeup artists and hairstylists may be asked to forgo having assistants. Or models might be asked to show up one hour before the show instead of three.

“It went from, ‘I want this. Let’s have it,’ to, ‘This is as high as we’ll go,’” said the show producer. “The booker for Gisele doesn’t negotiate much, but models who aren’t superstars are negotiated all the time.”

To wit: One top modeling agent, speaking on condition of anonymity, said the top models are still generating the bucks. “When a house wants the top girls, they’re willing to spend. It’s become a different story for the less well-known faces. There’s some negotiating going on there.”

Marco Macchi, director of Milan’s Riccardo Gay agency, which currently manages about 20 girls, said models’ salaries have been on the decline since the heyday of 1999 and 2000. He estimates that overall salaries have dropped about 30 to 40 percent from those swinging years.

He noted, however, the fashion houses still vie for the fresh faces, even if only the big houses have the resources to hire the ultrafamous.

“The rest of the companies have budgets that are continually shrinking,” he said. “That forces them to use new girls that cost less.”

“Certainly there are lower budgets,” said a Milan-based hair and makeup agency that will do 30 fashion shows there. “When it comes time for [fashion houses] to give us their deposit, we discover that they’ve found some other solution.”

Enzo Di Sarli, who runs Milan-based makeup and hair agency Face to Face, which counts clients such as Philosophy by Alberta Ferretti and Trussardi, said the situation isn’t nearly as dire. He thinks most fashion houses are cutting costs on internal waste like catering, while maintaining image-related expenses for shows.

He said his sales in 2002 rose by 25 percent and revenue in the first three months of this year rose by 15 percent. Small fashion companies might opt for presentations instead of shows, Di Sarli said, but bigger industry players can’t afford to scale back show expenses.

“Right now, if anything, they are investing more in their image,” he said.

Others painted a similar picture. A firm that does lighting for some top shows said that it’s “business as usual” in Europe. “The houses want to have a good, image-enhancing show.” On the other hand, the firm noted that fashion houses in New York had been more budget conscious and had driven a hard bargain. “They’ve been more directly influenced by what’s happening in the world right now.”

Whatever one believes, it appears that Europe’s smaller fashion names are tightening their belts the most. One Paris-based public relations agent said he had been scampering to pinch pennies for his stable of designers. Among the cost-cutting measures he explored this season were finding less-expensive venues and shaving costs off makeup and models.

“In recent seasons, there were a lot of sponsors that jumped on the fashion wagon,” he continued. “Being part of a hot designer’s show was a way for them to get press and enhance their image. This season, though, sponsors haven’t been so forthcoming. They had extra money, but with the economy in the state it is, they’ve been tightening their belts. They don’t have the money to throw around.”

Paris press agents who work with emerging designers point out that they always watch how much they spend on shows.

“We’re not talking about the mega-productions some of the big houses do,” said one agent, again speaking on condition of anonymity. “We’re not changing anything, really. To control costs more than we do already would be close to impossible.”

Another agent in Paris expressed similar sentiments. “Let’s just say we’re not spending less than usual. But we’re not spending more than usual, either.” The agent pointed out that some of the most costly aspects of staging a show include hair, makeup and models. “We can limit costs to about $35,000 for a show,” the agent said. “As for models, many of my designers get girls to walk their shows for free, or a reduced fee, just because the girl loves the designer. That type of behavior used to be even more prevalent. A model like Pat Cleveland used to cry to be in certain shows. But that passion for fashion is fading. It’s pure business for most of the girls.”