Celebrities and advocates who have been touched by cancer are featured in a multipronged campaign.

Much like the coronavirus, a cancer diagnosis is also a life-changing experience. Just ask Nathan Adrian, Elizabeth Lorde-Rollins and Maya Rockeymoore Cummings.

The Olympic gold medalist, the LGBTQ-advocate and physician, and the politician have all been personally touched by cancer and are just three of the faces in the 20th-anniversary campaign for Ralph Lauren’s Pink Pony initiative. They, along with nearly 30 others, are featured in the “More Conversations, More Love” campaign that kicks off today.

The cast of cancer survivors and supporters each share their stories in hopes of starting a dialogue about healing, hope, survival and love.

“When someone we love has cancer, we are all affected — husbands, wives, mothers and fathers, sisters, brothers and friends. This is our effort in the fight against cancer,” said Ralph Lauren.

The fashion company was at the forefront in the fight against the disease when it established the Pink Pony campaign in 2000 to reduce disparities in cancer care, participate in the effort to find a cure, and help to ensure that access to quality treatment is available to everyone at an earlier, more treatable stage.

The company first got involved in 1989, after the designer’s friend and Washington Post fashion editor Nina Hyde was diagnosed with breast cancer. That led to the cofounding of the Nina Hyde Center for Breast Cancer Research at the Georgetown Lombardi Comprehensive Cancer Center.

In 1994, Lauren designed the first target logo for the Council of Fashion Designers of America’s Fashion Targets Breast Cancer initiative. In 2003, the Ralph Lauren Center for Cancer Care was established in partnership with Memorial Sloan Kettering Cancer Center in New York City, and in 2014, the company partnered with The Royal Marsden, the largest and most comprehensive cancer center in Europe, to develop a breast cancer research facility, which opened two years later. Last year, the company pledged 1 million pounds to The Royal Marsden Cancer Charity to establish a Research Zone within a state-of-the-art facility opening in Sutton, U.K.

David Lauren, vice chairman of the board, chief branding and chief innovation officer, said the company is proud that it was the forerunner in the fight against cancer. “We were the first to connect our logo with a cause and help customers feel they were doing a good thing buying the product,” he said.

Although the corporation has since expanded to other causes as well, its commitment to cancer research and treatment has never wavered. “It’s become part of our company culture,” David Lauren said. “By the time it was trendy, we were already there.”

This year, because of the pandemic, the corporation has had to change up its marketing plans for Pink Pony. “We thought we’d be doing a walk in Central Park like we always do. We thought we’d be having a big concert,” he said. But the focus instead became the campaign.

So instead of just offering facts and figures to patients and their loved ones, the company opted to work with the larger cast on a video series and podcast where those featured talked about their survival strategies and how to maintain optimism in light of a cancer diagnosis.

One of those is Adrian, the swimmer who has won five Olympic gold medals and eight overall. He revealed last year that he had been diagnosed with testicular cancer at the age of 30. “So far, so good. I’m still in the active surveillance protocol through the winter, then I’ll be considered cancer-free and my chance of recurrence goes back to normal,” he said from his home in Oakland, Calif., where he’s riding out the pandemic. 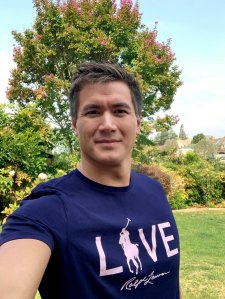 But while Adrian is back in the pool training for the rescheduled Tokyo Olympics, his cancer diagnosis is never far from his mind.

“You go from focusing on hyper-performance to knowing that your health is in jeopardy,” he said. “You switch gears quickly.”

Unlike a lot of other men who might have kept their diagnosis a secret, Adrian was comfortable going public with his battle. “I went public because I caught it early,” he said. He said when he felt something in his testicle that was a little hard and marginally swollen, he didn’t immediately deal with it because there was no pain. But his mother, a school nurse, had taught him early to have anything suspicious checked out. So when the lump was still there a week later, he went to the doctor, which led to a “cascade of events — the ball rolls very quickly,” he said.

He is well aware of the “major stigma” surrounding men and their testicles, which many equate with masculinity. “But that’s a misnomer,” he said. “Without your health, you can’t be masculine, so let’s be manly and talk about it.”

Adrian, who was a public health major in college, said that if his willingness to talk about his experience saves just one life, it will be worth it. He gets multiple messages on Instagram from others who have been touched by his story, he said. “And nothing feels better.”

His early diagnosis and successful treatment also allow Adrian to once again focus on his goal to swim the 50- and 100-meter races in Tokyo next summer. “That’s my bread and butter and I won’t be changing anything up,” he said. And while the news of the postponement was just another blow, he dealt with it in a similar way to his cancer diagnosis. “As you get older, you know yourself and what motivates you,” he said. “The right thing for me was to take a week off, walk, play Frisbee, let the emotions reset and build from there.”

But Adrian is not the only one who has been impacted by cancer. Lorde-Rollins said that her mother, the Black lesbian writer and feminist Audre Lorde, died of the disease at 44 — breast cancer that had metastasized into her liver.

“My mother was diagnosed when I was 15 and passed away when I was in the last year of medical school,” Lorde-Rollins said. “Half my life was marked by the fear of losing my mother.” 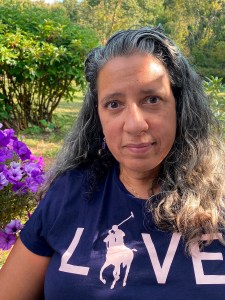 Elizabeth Lorde-Rollins had breast cancer when she was 39.

Then she herself was diagnosed with breast cancer at age 39, enduring surgery, eight months of chemotherapy and radiation.

Even though that was more than 15 years ago, Lorde-Rollins said that as a cancer survivor, “you’re always waiting for the next shoe to drop.” She joked that even something as simple as a bump on a knuckle of a finger can still cause panic. “And being a doctor doesn’t insulate you,” she said.

In addition to her advocacy of the LGBTQ community, Lorde-Rollins has been involved in the cancer community for years. She served as a reviewer of grant proposals for the Susan B. Komen Foundation, which made it possible for women of low income to obtain mammograms and other care. And the Pink Pony initiative has had a similar impact, so Lorde-Rollins was happy to be part of the campaign and help spread the word.

Former Maryland gubernatorial and Congressional candidate Rockeymoore Cummings watched her mother die from breast cancer and her sister get diagnosed before making the decision to have a preventative double mastectomy last fall. At the time, she was running for her late husband’s seat in Congress and prevailing wisdom said she should focus on the campaign instead of the surgery. 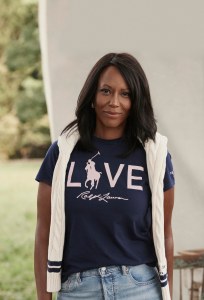 Maya Rockeymoore Cummings opted for a double mastectomy because of her family history.  BMG_PHOTOGRAPHY

“But I felt like I had two ticking time bombs on my chest and I knew I was next,” she said. Although she was unsuccessful in winning the election, she said she has no regrets about her decision or the timing.

“I saw my own mother’s death up close and personal,” she said. “Breast cancer is not a joke. So to have the opportunity to prevent it and cure it, we have to remain focused.”

That’s especially true for Black women, who die of breast cancer at a much higher rate. So as an African American, she is glad to help get the message out about the health disparity in hopes of helping other Black women with education and treatment.

Like the campaign, the 2020 Pink Pony apparel collection has also been expanded this year. It includes a larger assortment with updated graphics and details in a palette of pink, navy, white, and gray. The anchor piece is a “Love Language” T that is available in 20 different languages. One hundred percent of the purchase price from the sale of each light pink “Live Love” graphic T and 25 percent of the purchase price from the sale of all other items in the Pink Pony Collection will be donated to the Pink Pony Fund of The Ralph Lauren Corporate Foundation or to an international network of cancer charities.

The collection will be available globally in select Ralph Lauren retail stores, on the brand’s e-commerce site, at Macy’s and in other select retailers.

And for the first time, the collection will include a fragrance: the Romance Pink Pony Edition. With each purchase of the fragrance, Ralph Lauren Fragrances will donate 100 percent of the profits to the Pink Pony Fund.

Ralph Lauren Fragrances will also partner with florist Lewis Miller of Lewis Miller Design, to create “Flower Flash” installations inspired by the fragrance, on the streets of New York throughout the month of October.

Because of the fragrance and the expanded distribution of the product, David Lauren believes this 20th-anniversary initiative will have an even bigger impact this year. “Cause-related products are doing very well at this time,” he said, adding that cancer patients face many of the same challenges as those battling the coronavirus. “They can be vocal advocates on how to survive the pandemic,” he said.