Humberto Leon and Carol Lim's fall 2013 collection for the Parisian house will be presented in a runway show on Jan. 10. 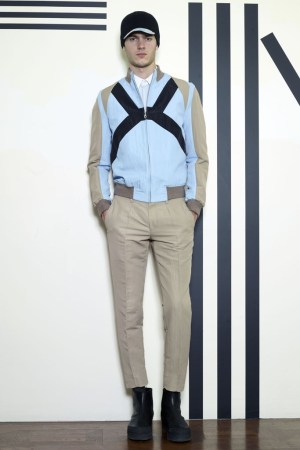 For their third men’s wear outing at Kenzo, designers Humberto Leon and Carol Lim are putting a cosmic spin on the brand’s eclectic design heritage. Known for bold patterns and jungle motifs, the Parisian house’s fall 2013 collection — to be presented in a runway show at Pitti Uomo on Jan. 10 — is an “otherworldly” interpretation of those themes, according to the designers.

“There’s a bit of mysticism. It’s a very different approach to the idea of ‘jungle,’” explained Leon. “Last season, we did something very inherent to the brand but this time it’s not as literal. It’s more modern and a different interpretation of a jungle from another world.”

The concept includes Asian references that incorporate a simplicity of line and eschewal of embellishments in many pieces, added Leon. The designers looked to Eastern religions and mythologies for inspiration, including Buddhism and Zen philosophies.

Kenzo’s selection as the special guest designer at the 83rd edition of Pitti Uomo in Florence signals the newfound buzz that Leon and Lim have brought to the LVMH Moët Hennessy Louis Vuitton-owned brand. The partners, who took the creative reins of Kenzo in July 2011, made their name as the founders of the directional Opening Ceremony group of stores in New York, Los Angeles, London and Tokyo.

“We wanted to modernize the brand, but also pay homage to its traditions,” said Leon of Kenzo. (Lim did not participate in the interview as she was at home in New York with her newborn baby.)

RELATED STORY: Ones to Watch at Pitti Uomo >>

The designers, who took over from predecessor Antonio Marras, have added a youthful touch to the French brand, which has always been known for a multicultural joie de vivre. In their first two men’s collections, Leon and Lim injected a streetwear element — such as sweatshirts, nylon jackets, caps and reversible designs — to the classic tailoring and colorful sportswear that are hallmarks of Kenzo. Patterned riffs on leopard spots and tiger stripes enlivened shirts, pants, vests and outerwear in the spring collection.

Leon and Lim are in the early stages of their revamp and re-imagination of Kenzo. “In some ways, I feel like this is our first real collection,” said Leon of the upcoming show at Pitti Uomo, to be staged at the Mercato Centrale di San Lorenzo food market. “We’ve been getting our hands dirty and looking at all the elements and possibilities of the brand. A year into it, I feel that [we] have a really good grasp of what the Kenzo man wants to be.”

The Kenzo brand today rings up total retail sales across all product categories of about $1 billion, according to the company. There are nine directly operated Kenzo boutiques and more than 30 concessions worldwide. In the U.S., the men’s collection is sold at Barneys New York and Opening Ceremony, while internationally it’s stocked in stores like Selfridges, Harvey Nichols, Printemps and Beams.

Kenzo was founded by Japan-born Kenzo Takada, who opened his celebrated Jungle Jap store in Paris in 1970. The company launched men’s wear in 1983 and fragrances in 1988. Fragrances, now licensed, are the brand’s biggest revenue generator, followed by ready-to-wear. Other licenses include eyewear, shoes, home and children’s wear.

The house has always been known for its suits and Leon and Lim have tweaked and modernized its tailored fits. “We tore all the suits and shirts apart and looked at the inner workings of the garments and relooked at how to make them all,” explained Leon. “Every jacket has a pocket for your iPhone or BlackBerry now. Technology is a defining moment of this era and we want to include that in our designs.”

In a new pricing and merchandising strategy, LVMH has straddled Kenzo between the contemporary and designer arenas. “It’s positioned in an exciting and interesting place where it doesn’t need a secondary line and it doesn’t need a couture line,” said Leon. “There are streetwear pieces that have introductory price points but we also have beautiful suits up to 1,200 euros [or $1,580 at current exchange]. We want everything to have a reason for its price, whether it’s a coat that costs 400 euros [$527] or a coat that is 3,000 euros [$3,954]. There’s room for all these different elements. I think it’s a more modern idea — it can be seen as luxury but there’s room for different price points.”

The brand is decidedly dual-gender, with women’s product generating 55 percent of sales and men’s 45 percent. Leon and Lim are emphasizing commonalities between the two components of the business, with prints being shared between men’s and women’s designs for the first time in Kenzo’s history, said Leon. The designers even renovated their Paris offices to situate their men’s and women’s teams together.

“One of the first things we did here was to physically break down the walls between the men’s and women’s businesses,” said Leon of the new floor plan at Kenzo headquarters in Paris.

Leon and Lim split their time between Paris and New York, but work on the Kenzo and their Opening Ceremony business in both cities. “They are both super exciting projects but they have very different points of view. Kenzo has its own rich history and we are telling a story about that brand while O.C. is something we created with its own vision,” explained Leon.

The two designers prefer to collaborate on all aspects of the creative process, rather than divvying up responsibilities for different facets of the business. When in Paris, they even share an apartment in the 11th arrondissement near Bastille. In New York, the duo live in the same East Village building, but in separate apartments.

“We are pretty in tune with each other,” explained Leon, of their close, interdependent bond. “Everything is talked through and we share a very similar vision. We are very trusting of each other. We’ve never had a disagreement in the past ten years. We may have had an argument about food, but nothing ever work-related.”