The line’s launch had been expected after WWD reported last summer Chinn had left the company she founded and built more than 20 years ago in a bid to get back to what she called her roots: focusing on branding and designing a line that embodies the West Coast for a global consumer.

Chinn had pointed out the challenges that come with also having to balance business objectives around growth in new markets as being a struggle that took time away from more creative endeavors. What she built was sizable with the company’s new ceo reporting last year volume north of $40 million.

She still retains what she called a “significant ownership” stake in the company but preferred not to further discuss the business.

That’s given way to a launch collection both Chinn and business partner, cofounder and design director Duncker, formerly Planet Blue design director, both used words such as intricate and elevated to describe.

“We wanted to have time to really perfect fit on the garments in building the collections,” Duncker said. “We wanted each piece to stand on its own.”

Sun Becomes Her is also seen as a different customer from who the two had previously been designing for. 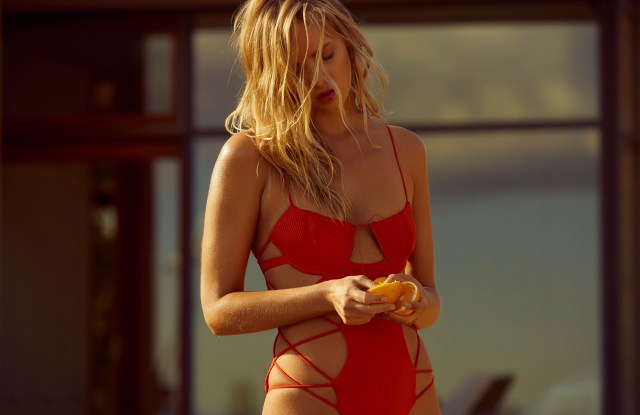 From the recently launched line Sun Becomes Her.  Courtesy Photo

“Before, we used to be more of a sexual product,” Chinn said. “I would say Sun Becomes Her is more sensual, not sexual. We’re hitting an older market, 25 to 35.”

A good chunk of the collection has an element of corsetry, with underwires and smocked boning — details that “make the garment function better and look better on the body,” Duncker said.

“When we started designing the line, we wanted to bring in an element of clothing that celebrates women’s curves so we took special interest in creating details where you don’t have to wear a bra and where women with a fuller chest can wear it and feel comfortable,” Duncker said.

Sun Becomes Her takes what the market already knows is working: going direct. Although the line quietly launched with retail partners Revolve and Free People and may potentially work with a European retailer, the focus is direct-to-consumer, Chinn said.

The company more recently completed and launched the Sun Becomes Her online site with all imagery shot outside, instead of a studio. That’s a key point to the atmospheric brand the two are aiming to build, Chinn said.

While neither is a stranger to brick-and-mortar with Planet Blue having several stores, Chinn’s not keen on jumping back into those waters any time soon.

“It’s definitely not my wish,” she said. “If there comes a time when we can do a pop-up store in the Hamptons or something like that, but where Planet Blue is more California driven, this is more of a global brand that we are doing. It’s about events and travels.”