Heading into its third year on the scene, what can L.A. fashion week do to be taken seriously? 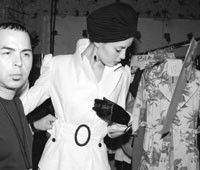 Three times can be a charm. Or it can be the strikeout that costs you the game.

As Los Angeles readies for its third formally organized and staged fashion week at the end of March, WWD asked retailers, designers, editors and show producers just what will it take for L.A. fashion week to mature into an international must-see event.

Michelle Mason, designer: “That’s the million-dollar question, right there. Upping the caliber of designers for the show wouldn’t hurt. I feel like a lot of designers dropped out last season who should show. It might be beyond their financial control, but we need them to at least do a small presentation, or they can show as a group. Look at what Magda [Berliner] did. Maybe all those T-shirts and jeans lines need to show another time. They dilute the designer aspect of the shows. At times, I feel in order to be taken really seriously, maybe I do need to show in New York. Either way, like I’ve always said, I’ll always show here, too.”

Suzy Menkes, fashion editor, International Herald Tribune: “I am interested, of course, in original designers like Magda Berliner. And Imitation [of Christ] is important to that young Hollywood thing. But I need to get out to Echo Park or wherever to see what cool people are wearing and what is going on. As with all the fashion weeks in any city, you spend a lot of time in an arid venue without really feeling at the heart of things.

“To appeal to the international crowd, there would need to be some transportation organized and info given as to different places to see. I don’t find New York fashion week very satisfactory — too many garmentos filling up the calendar. If L.A. continues with the same formula of a bunch of indeterminate [lines] — some good, some so-so — I would feel the same. L.A. needs to sell its lifestyle, its individuality, its ethnic mix, its quirkiness, its origins of vintage chic — not just try and replicate other cities with a laundry list of designer shows.”

Arianne Phillips, stylist and costume designer who has worked with organizers of L.A. fashion week: “People have to understand that L.A. is a newbie. This is something that is going to take seasons to develop. That’s hard for many fashion people to grasp, because we expect everything to change quickly. Considering what we’ve been able to pull off, it is really encouraging. For me, Los Angeles fashion is not in the same terms as the other fashion cities. It really needs to find its own identity — and not just the celebrity factor. I’ve been an advocate of getting costume designers involved. It should also be more event-generated. These young designers should think of it as a chance for experimentation. The great thing about fashion week is that it is creating community.”

Richard Tyler, designer: “It’s going to take time. The dates are an issue, of course people have been to New York, been to Paris. We can’t go before them. Being at the end of the schedule — that’s always going to be there. I really hope that once it gets more European press the rest of the world will be interested. There’s so many creative, talented designers here doing such diverse things. I can’t understand why it’s so hard, especially for the American press to see it. As long as the designers keep putting out things that are newsworthy, then it will get more respect. It’s like a baby right now that needs to be spoon fed. Hopefully, it will eventually feed itself.”

Michael Fink, senior market director, Saks Fifth Avenue: “We love the idea of L.A. fashion week because the L.A. market is such an important business for us. There are two things that could help: The venues need to be closer together. As it’s been, it’s impossible to navigate and it makes everyone choose between the two. The other thing that might help the situation become more serious is the lines on show. There are a lot of lines that don’t need to be on the runway, and they would be better served in a showroom or at a trade show. There needs to be a reviewing panel, like in every other city, to assure a certain set of standards. I’m going this time, definitely. I like that it’s moved up. It’s right at the end of the whole fashion week cycle, so you’re still in the mood for it.”

Ed Burstell, general manager, Henri Bendel: “L.A.’s become more and more important, and we’re spending more time there. It’s up to six times a year now. If fashion week is the one shot for others, it’s pretty difficult to cover it all.

“Centralizing and taking it downtown was a great start. But the fact there still existed multiple locations was a real nightmare for a buyer. Other than logistics, there’s the actual content. There are too many lines from the contemporary and denim world that are not runway worthy but [show] just because a company has the money or inclination to do a show. If you look at Louis Verdad or Pegah Anvarian, you see a higher quality level, some ideas there. L.A. needs to build on the talent it does have and it has to be edited a little differently. It’s the home of TV and movies, and I do think in order to make it attractive to the world stage you have to somehow figure out how to harness that star power.”

Julie Gilhart, vice president and fashion director, Barneys New York: “Last time was a real step up. You can’t be a forward-thinking retailer without knowing what’s going on in Los Angeles. What it’s going to take is some key designer who you can only see in L.A. It could be a heavy hitter or something else completely. If Rick Owens was showing in L.A., I’d be there. But maybe there can be a show with several denim lines — we’d be there in a second. I’m trying to come out this time.

“That’s what’s key about any market. But it just takes time. What is needed now is more cohesiveness. There’s no doubt that L.A. has been bumping up importance in the last few seasons. If Los Angeles tries to be like New York, it will fail. It has to be Los Angeles, and it has to be really strong.”

Fern Mallis, executive director, 7th on Sixth, which produces MercedesBenzShowsLA: “It will take a little perseverance, a little time and it will ultimately take talent. That is what will put L.A. on the map and give it the respect it deserves. We believe there’s talent there — a lot of talent we haven’t seen on the runway. But it needs nurturing and support. We’re providing the organization and a platform. Changing the dates to the world calendar gives the market a little more legitimacy, so it’s not viewed as just another regional market. I discussed with the CFDA about getting the L.A. designers considered in the voting. The media coverage, which leads to the demand for the product and the buyers coming out, is what will ultimately make it.”

Dean Factor, co-founder of SmashboxFashionWeekLosAngeles: “It’s going to take L.A. to do the shows for another couple of seasons before we really get established and the rest of the world is assured it’s not going to go away. The designers are here. Once they have a place to be seen, the world’s buyers and media will realize it’s a fact, and a good resource for editorial and retail. I do think that having Mercedes[BenzShowsLA] and our venue is helping to push that along.

“We have an overwhelming number of requests for shows. American Express is on board, and we have four or five other corporate sponsors. When you have these major corporations say, ‘We believe in what you’re doing,’ that gives an enormous amount of credibility.”

Booth Moore, fashion editor, Los Angeles Times: “There is talent here, but it may not be of a caliber that will attract international media and buyers, and it’s certainly not enough to support competing L.A. fashion weeks, which is what we have now. L.A. is an exciting market, and people would be interested in what’s happening here if the venues were right and the schedule were tight with well edited shows that started close to on-time. One hopes that the momentum won’t be lost because of a clash of egos.”

Tracey Ross, West Hollywood retailer: “In order for L.A. to make a difference, our approach to runway fashion has to be totally different. It can’t try to be New York or other cities with the typical runway shows. Instead of trying to keep up the pretenses of doing a designer show — which these designers can’t afford —maybe they need to do something a little bit different, a little groovier, like the film at MOCA that Erica Davies did or the walk-through installation Magda Berliner presented. Why do we have to copy what’s already been done and done so well? We’ve got to make our own mark in a different way that is cool and fun and very L.A.”