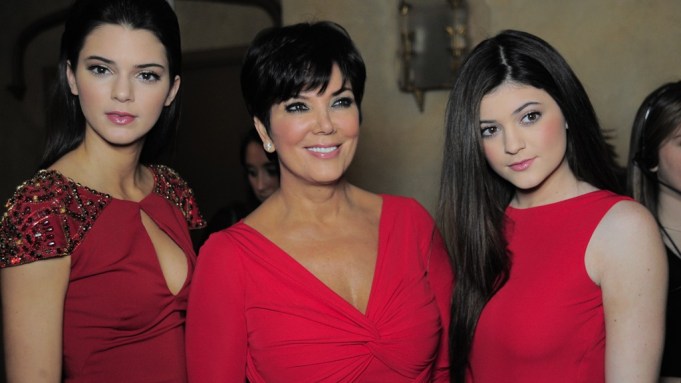 New York is crawling with models trying to make names for themselves, but Wednesday night’s The Heart Truth’s Red Dress fashion show featured 16 who have done so — though nowhere near a runway.

Backstage, Kris Jenner, Kelly Osbourne and Jillian Michaels worked the fame game, while others, such as Savannah Guthrie, Soledad O’Brien and Toni Braxton, were more low-key. Ditto for Olympic gymnast Gabby Douglas, whose five-inch Louboutins just weren’t cutting it. “Are there flats?” she asked — and then happily crammed her feet into a gold metallic pair bought in an airport vending machine. “Everyone keeps telling me to do splits out there. I’ve got to keep it classy because I’m in a Pamella Roland dress, and she wants me to work it,” Douglas said.

Jenner’s daughters Kylie, 15, and Kendall, 17, were also being their teenage selves, texting away before the show. Their self-described “momager” chose to be the family spokeswoman at the Hammerstein Ballroom event. The trio put on a united front by wearing Badgley Mischka gowns. Jenner’s two-day guest host gig on “The View” this week was just a warm-up for her own talk show, “Kris,” which launches this summer. Her two younger daughters will be making the rounds this week plugging their new label for PacSun.

As for the media’s scrutiny of her family, Jenner said, “I tell my kids, ‘You just have to ignore a lot of it.’ As far as the tabloids, I haven’t seen anything in a very long time that has been anywhere near the truth. I think people are smart enough to realize that if they see you on the cover of a magazine for 15 or 16 weeks in a row [and it says] that you’re getting divorced and you’re not getting divorced, well, you know, they’re either onto something or it’s silly. You have to either ignore it or move on. We work so much that if we stopped and looked at every little thing, we wouldn’t be working very hard.”

Osbourne, meanwhile, was pleased to have photographers aiming at her. “I’m barely a model citizen, let alone act as a model. 0000.1 [sic] percentage of women are beautiful and have the bone structure to be a model. And then they ask me to do it, who is 5-foot-2 and dumpy. I’m like, ‘F–k yes.’”

Wearing Zac Posen, the purple-haired “Fashion Police” regular sounded like her worst critic. “This is so much fun, but then when I see the pictures later I’ll be like, ‘Ugh, you’re all boring.’”

After sizing up the Grammys’ red carpet for the E network, Osbourne will be off to Paris for the shows with a new bag in hand. “I bought the sickest — where is it? — mint Chanel handbag. I’ve been looking at it for, like, six months. I’d been thinking I didn’t want to spend that much money on a handbag. That’s stupid, because I knew someone else was going to make a copy of it. But then I was like, ‘F–k it. Buy it. Mint green.’ I wore it as a necklace all last night.” Not used to such splurges, Osbourne said, “Most people don’t actually look at me as someone

who works. They think my life has been handed to me by my parents. It’s the opposite, but it pains me how much the bag costs. I usually only spend money on art. Mark Ryden, Andy Warhol. I love pop culture art in a way a lot of people my age don’t fancy…the Chapman Brothers.”

Fitness guru Michaels had other numbers on her mind — a diet that consists of 3 percent trans fats increases the risk of heart disease by 23 percent. Her next book, “Slim for Life,” is out next week, her “Hard Body” DVD makes its debut in March and her eight-week cross-country Live Nation tour starts in April. Taut in a ruched Cushnie et Ochs dress, she offered one quick fix to anyone who asked — eat clean 80 percent of the time. As for the other 20 percent, Michaels said, “When I’m in New York, it’s bagels and Fat Witch brownies. That’s my New York state of mind.”

As the clock inched toward 8 p.m., “Today” host Guthrie was starting to have work on her mind. “It’s almost my bedtime — anywhere between eight and nine. I get up at three.”

Statuesque in a Carolina Herrera gown, the NBC commentator laughed at the suggestion of outwalking CNN’s O’Brien. “Oh no, we’re friends,” she said. “Our business has a reputation for being competitive. In my experience, we are all supportive of each other.”

Talk show host Wendy Williams fired through her checklist — a soon-to-be-announced home collection with a national retailer, a new wig line, her sixth book, “Ask Wendy,” and “Secret Celebrity,” a reality show she and her husband, Kevin Hunter, are producing for Oxygen.

For Olympic snowboarder Torah Bright, the catwalk was nothing compared to a McTwist — the 540-degree backside rotation she does on the half-pipe. But her strapless Nicole Miller dress was considerably more formal than the signature label she designs for Roxy. Excited as she was to be at the start of fashion week, she said, “I leave for Russia tomorrow for an Olympic test [in Sochi].”