While Paul Poiret is known for popularizing trends like the hobble skirt and the kimono coat, he also contributed to a little-known play in 1917. 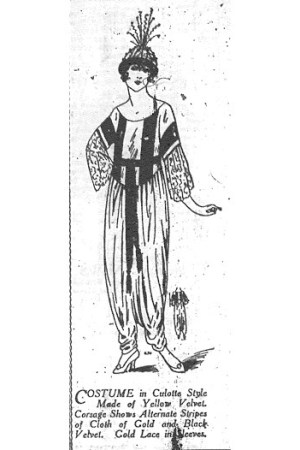 While Paul Poiret is known for popularizing trends like the hobble skirt and the kimono coat, he also contributed to a little-known theatrical production in 1917. On October 13, 1917, WWD ran a review of the designer’s fabulous costumes and sets for the Theatre Michel’s Revue by Rip, in which the main character visits an alchemist who gives him a time machine. The review elided all comment on the script or the acting, noting that it is “only sufficient to mention the structure to explain that it gives to Poiret the occasion to develop his best efforts.”

The story’s time period shifts allowed Poiret to evoke eras from ancient Greece to Versailles under the Louis XIV regime. One scene took place in the 16th century around the time of Joan of Arc. While WWD said the looks there would be “unacceptable to the American public,” the reporter acknowledged that they were based on paintings from the period and speculated they might be the inspiration for dress trends in the future.

But Poiret’s talent shone most brightly in a scene where Satan and seven sinners (each afflicted with a mortal sin) make an appearance at the court of Isabeau de Baviere, the Queen consort of France in the 14th century. Pride, for instance, was represented by a woman dressed in silver tissue and an “absolutely splendid” headdress that resembled a peacock’s tail. Meanwhile, the finale was set in the year 2017 and revolved primarily around culotte-style dresses. Of the supposedly futuristic looks, the writer noted, “I do not believe we will be kept waiting 100 years to see the development of this fashion.”