Poleci is growing slowly and deliberately. 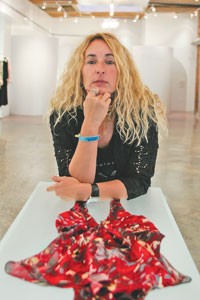 The 11-year-old company designs clothes that are meant to be noticed — Mongolian lamb capelets, bejeweled camisole tops, patterns and a liberal hand with jewels — but its U.S. expansion has been low-key.

Poleci, (pronounced POL-icy), has established a beachhead in Los Angeles, where its founders, South African sisters Janice Levin-Kroc and Diane Levin, live, and where fashion is bright, trendy and body-conscious.

While most retail executives have a top 10 list of cities where they would like to plant stores for starters, Poleci has modest ambitions on the real estate front. The company plans to grow organically by adding new product categories and expanding its U.S. and European wholesale distribution.

“Worldwide, we’d like to have 12 stores and that would be it,” said Levin, the chief executive officer.

“Our business seems to steadily grow because we distribute worldwide,” said Levin-Kroc, 43, designer of the collection. “The idea is to add on additional products. We’ll do handbags, accessories and jeans. It’s about expanding the different divisions. We’ve launched a lingerie line. That’s really how we intend to grow.”

The company’s volume is projected to approach $30 million for 2005, Levin said. The 14th Street store here is expected to have sales of $1 million in the first year.

Unlike other brands that offer watered-down versions of the trends, Poleci gives its customer a full-throated interpretation of what’s hot on the international runways.

“Everything I do has very little to do with ego,” Levin-Kroc said. “It’s all about what the customer wants. The biggest thing is the word sexy because women want to be sexy. It’s what sells. Something we always have to keep in mind is that our customer understands the trends and wants the real trends.”

If Poleci customers want trends, they also seek variety. The brand offers 74 to 80 looks a season with sales split between hard and edgy looks and soft and feminine styles.

The new store gives off various vibes. The original rafters and beams left exposed and the exposed-red brick wall at the back of the store lend a raw edge to a sleek design with white tables and polished concrete floors.

Levin-Kroc was a child of fashion — her mother owned boutiques called Chiquita’s in Beroni, a town outside Johannesburg, where she and her sister were raised. (Beroni is also the hometown of Charlize Theron.) She went to design school and also earned degrees in industrial psychology and law, but was drawn back to fashion and opened a boutique called Vanilo R. in Sandton, near Johannesburg.

By 1994, Levin, 45, was an attorney living in the U.S. and Levin-Kroc wanted to join her. “She was still living overseas and wanted to live in L.A.,” Levin said. “We started the company at that point to give her a vehicle. I didn’t realize how much work was involved.”

They came up with the name Poleci because “we were doing a lot of body-conscious clothing,” Levin-Kroc said. “The idea was, ‘Our policy is your body.’ We didn’t want to spell ‘policy’ the traditional way so we come up with an alternative spelling.”