Polo Ralph Lauren is a winner at Wimbledon. 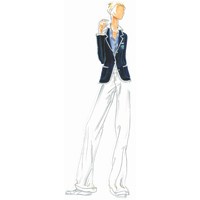 NEW YORK — Polo Ralph Lauren is a winner at Wimbledon.

The New York-based fashion giant, which has long been inspired by all things British, is to become the official outfitter for the world’s most prestigious tennis tournament.

Under a five-year deal with the All England Club, which stages the championships, Polo will dress all on-court personnel, including chair umpires, line judges and ball people, starting this year. Polo becomes the first apparel outfitter in Wimbledon’s 129-year history.

“We are definitely building up our sports marketing, but we do it our way,” David Lauren, Polo’s senior vice president of advertising, marketing and corporate communications, said in an interview Tuesday. “We are not Nike, nor do we want to be.”

He said Wimbledon was a good fit for the company, which has long made tennis apparel.

“The main goal is for us to be integral for an event. It can never be that we are just a sponsor,” Lauren said. “We are very careful about what we do and we take our time and make sure it feels right.”

The company declined to disclose terms of the deal. However, Lauren said Polo is spending less than $10 million for the sponsorship.

Polo approached the All England Club about forming the partnership and a top club executive attended the U.S. Open to see what Polo did for that tournament, Lauren said. Polo has a four-year apparel sponsorship with the United States Tennis Association, under which it provides apparel for the judges, umpires and ball people.

The Wimbledon sponsorship is important for Polo to build its international presence and beef up its European business, he noted.

“We are working with stores such as Harrods, who will feature the collection in special in-store shops,” Lauren said. “We are a global company and our European business is critical to our success.”

Wimbledon, the only Grand Slam event played on grass, begins on June 26. It is known for its strict dress requirements — players must wear white. The tournament started as a garden party in 1877, and now draws about 450,000 spectators over two weeks. It has more of an international — and upscale — flavor than matches in the U.S., and the club has traditionally shied away from blatant commercialism. It has only a handful of sponsors with discreet signage and advertising. Its other sponsors include Rolex, American Express, Philips and IBM.

The initial Polo Wimbledon looks are more sophisticated than the navy uniforms the company created for the U.S. Open, Lauren said. Based on early sketches of the collection, attire for the judges and umpires has a heritage-inspired tennis look that includes navy blazers, white trousers and collared shirts. The ball people will wear more performance-oriented products and all uniforms will have the Wimbledon logo as well as a Polo logo, said a company spokeswoman.

An expanded collection will also be available to consumers during the event at Polo’s own freestanding stores, online at polo.com and at select other retailers.

At the U.S. Open in New York, Polo had a store on-site and sales exceeded plan, Lauren said.

Polo plans an advertising and marketing campaign around Wimbledon, primarily in Europe, Lauren said. In addition, he said the company is looking to open a store on-site at the All England Club.