Polo Profits Get a Boost

Polo Ralph Lauren Corp. was at full gallop in the fourth quarter, as profits more than doubled and beat Wall Street estimates by a penny. 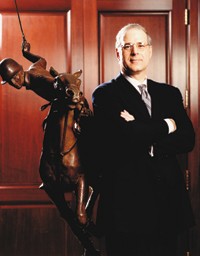 Total revenues in the quarter rose 7.7 percent, to $971.6 million from $902.2 million, which included a 5.7 percent gain in wholesale sales to $573.8 million and a 14.9 percent increase in retail sales to $334.9 million. The increase in wholesale volume came primarily from the inclusion of Polo Jeans and footwear, the launch of Chaps for women and boys, and increased sales in Lauren and the company’s full-price men’s wear business. At retail, total company same-store sales rose 3 percent, reflecting an increase of 1.2 percent at Ralph Lauren stores, 10.6 percent rise at Club Monaco stores and 2.8 percent in factory stores. Revenues at Polo.com rose 73 percent. The balance in total revenues was from licensing income.

“The underlying fundamentals of our business and the ability to leverage our strengths have never been better. Looking forward, we will continue to take steps to advance our retail expansion, to further enhance the quality of distribution of our brands and to further strengthen our infrastructure. We are excited about our prospects and look forward to another strong year,” said Ralph Lauren, chairman and chief executive officer, in a statement.

Roger Farah, president and chief operating officer, in a telephone interview attributed the quarter’s results to “fabulous product” across all brands under the Polo Ralph Lauren umbrella. He explained that product line from one business is creating demand in another, sibling operation.

Other boosts to the company’s bottom line were the ability of the retail operation to support the company’s wholesale component and the consistent messages to consumers via advertising at Polo.com and through print media. Farah noted the company’s best customers are cross-shoppers, buying across different product lines and at multiple points of distribution.

This story first appeared in the May 26, 2006 issue of WWD. Subscribe Today.

The company this week said it would shut the U.S. operation of the Polo Jeans Co. brand in spring 2007. Polo bought back the U.S. business in February from Jones Apparel Group for $255 million. The international Polo Jeans business, which already targets a higher-end market, will be unaffected.

The decision to stop Polo Jeans distribution in the U.S. is part of the company’s overall global strategy for the denim business. A high-end premium denim line will be introduced for men through Polo Ralph Lauren and for women though the Lauren brand.

The company will continue to expand its denim products in other lines via a tiered approach. “Beginning in spring 2007, we will increase our Double RL denim products at our highest price points…In addition, we will increase our denim offering in our Rugby brand as well as our Chaps brand for men’s, women’s and children’s,” said Farah during a conference call to Wall Street.

He noted during the telephone interview that at Double RL, a pair of jeans could run as high as $400; merchandise at various price points below that is expected to be “very successful.” In comparison, denim merchandise under the Black Label brand starts at $325 and can go to over $1,000. Double RL as a retail concept is still in its infancy, and Farah acknowledged there are plans to expand the store base, but declined to elaborate other than to say the company is “looking at some sites.”

The company expects to expand its accessories business, which has a higher margin opportunity. In Lauren, which already has handbags and footwear, category possibilities are belts and scarves.

Men’s wear sales appear to be getting stronger, and the factory store business has been helped by shrinkage in off-price distribution and the reduction of underperforming doors.

The company affirmed its previous earnings per share forecast of $3 to $3.10 for fiscal year 2007.