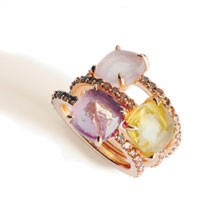 That’s because since Pomellato started giving its stores an updated edge in 2003, the makeover has always included pieces by Michael Lin, the Tokyo-born artist known for his floral renderings inspired by Taiwanese textiles.

The 1,080-square-foot store here, though, is the only one to house an exclusive, 29-by-23-foot panel painted with a smattering of gigantic floral motifs in green, red, orange and fuchsia.

Pomellato’s intent when revamping such key boutiques as those in Barcelona, Paris and Florence was to do away with the formal and intimidating aura that still surrounds many fine jewelry stores.

“Jewelry stores are normally about double-security doors and ostentatious windows that are daunting to the consumer,” said Francesco Minoli, Pomellato’s chief executive officer. “Our mission is to sell luxury accessories, so we opted for a more ironic and innovative blueprint.”

He added that when the company first employed Lin’s floral armchairs in Barcelona two years ago, the success was so instant that Lin’s work became the common denominator for other units.

This blueprint will be reflected in upcoming Pomellato venues — in Dubai, United Arab Emirates, slated to open in November, followed by Madison Avenue in New York, Berlin and Turin, Italy, in 2006.

On the product front, Pomellato’s newest collection is Baby, a line of rose-gold rings and earrings with amethysts or quartzes surrounded by brown diamonds.

Minoli expects to seal 2005 with consolidated sales of 108 million euros, or $130 million at current exchange rates, a 10 percent hike over the previous year.