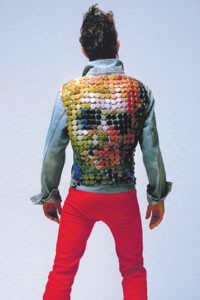 Scrollan, a Berlin-based design agency, has submitted three jackets featuring portraits of rock stars created entirely out of different colored pins for the “Stuck On Me” show, which will run from Monday to next Wednesday. As the title of the show suggests, the exhibit is devoted to pins and buttons and will display the work of 30 creative teams on this theme.

The Lee jackets, depicting rock luminaries Michael Jackson, Ozzy Osbourne and Elton John on the back, will be shown under the title “Sex, Drugs and Rock & Roll Begin to Get Old.”

“We’ll leave everyone to make their own minds up as to which singer stands for sex, which one for drugs and which one for rock ‘n’ roll,” said Barbara Kotte, one of the three designers who came up with the idea. “We chose these pop stars because pins are quite an Eighties thing and we wanted to depict people who had been around then. These guys are not exactly the youngest singers around.”

Kotte describes the jackets as both design objects and fashion items, and she has even tested the waters herself by wearing them around Berlin. Of course, the German capital being a city renowned for way-out fashion, no one really looked, she said.

So will Scrollan be making more jackets?

“No way,” said Kotte, laughing. “Sewing 350 pins onto each jacket was complete madness and drove us totally insane.”