The actress interviewed the designer in front of an auditorium full of people Wednesday night at Lincoln Center. 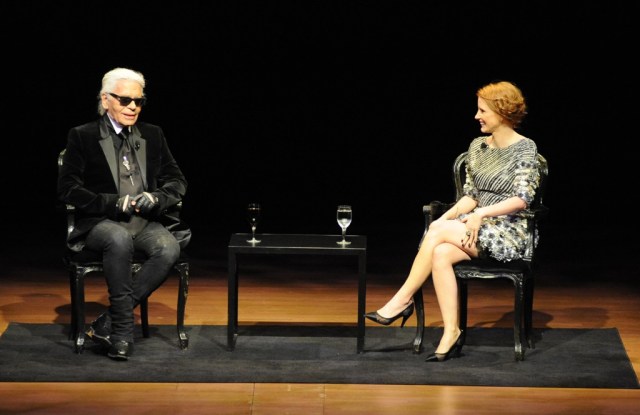 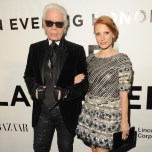 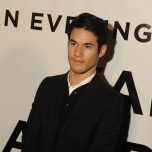 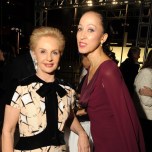 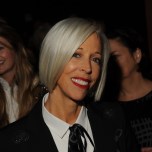 Any journalist who’s worked a red carpet or a press junket knows that there is such a thing as a stupid question — but sometimes it’s your job to ask.

Just ask Jessica Chastain, who agreed to interview no less a formidable wit than Karl Lagerfeld in front of an auditorium full of people Wednesday night at Lincoln Center. “It’s hard. I have newfound respect,” she said. “He’s so quick and you have to really be on your toes. He talks very fast, so you’re there listening, and you’re like, ‘Oh wait, I have to have another question.’”

Chastain did her homework — she came armed with a stack of note cards on which her questions were clearly typed out — but Lagerfeld threw her a curveball 30 minutes before the interview. “He saw I had questions, and he said, ‘No no no, I want to improvise.’”

Intimidating? Yes, even for a two-time Oscar nominee who studied at Juilliard and has extensive theater experience. But Chastain held her own, starting off with a Psych 101 softball — “I want to know, what was baby Karl like?” — and going on to cover subjects ranging from Lagerfeld’s mother to his love of drawing and silent film to his famous cat Choupette to whether he owns sweatpants (“No”) and what his pajamas look like.

Lagerfeld thwarted that one, but for the most part let the quippy quotables flow.

• On the perks of designing three collections, Chanel, Fendi and Karl Lagerfeld: “I’m very happy that I have a French version and an Italian version, and then I have my own company. I’m not obsessed by my own name — I couldn’t care less. What I like is a job. The ego trip comes later, and who cares? I can’t cross the street, but, please, it’s not really important. People in this business, they want to be like Chanel and Fendi, but if you don’t have the money of Chanel and LVMH [Moët Hennessy Louis Vuitton], you cannot be like this, so forget about it. I wanted my name, which is apparently quite popular, to be something less expensive, that’s why I did H&M, because today fashion has to be well designed — expensive or not expensive.”

• On showing the Métiers d’Art in Dallas on Dec. 10: “One should not forget that America relaunched Chanel. When Chanel reopened — because of her past, I don’t know — the French hated. Beyond nasty. Only America and especially Neiman Marcus were great about her. This is nearly 60 years ago that she reopened, and 55 years ago she went to Dallas to get the award from Neiman Marcus. I think it’s a good thing to pay homage to America, which could relaunch Chanel in the Fifties. It’s thanks to America, not thanks to China or Japan.”

• On clean living: “I’m the most boring person in the world. That allowed me to survive better than a lot of other people. Because if you don’t drink, if you don’t smoke and you don’t take drugs — and I’m not missing it; I never wanted it — and you sleep for seven hours, I can tell you, life is quite pleasant. You don’t feel tired or exhausted and things like that. You get up again and have the next day. I know that’s very boring, but, you know, I admire people who destroy themselves.”

Lagerfeld and Chastain kept the audience, which included Ralph and Ricky Lauren, Jeff and Justine Koons, Carolina Herrera, Carine Roitfeld, Stephen Gan and members of Lagerfeld’s entourage, amused for 40 minutes, after which there was a gala dinner in Alice Tully Hall. Billed “An Evening Honoring Karl Lagerfeld” and sponsored by Hearst Corp. and Harper’s Bazaar, the event benefited the Lincoln Center Corporate Fund, which supports 10 organizations resident at Lincoln Center, including the Metropolitan Opera, the New York City Ballet and the Juilliard School. The benefit is intended to become an annual Hearst-sponsored event, with Stella McCartney already lined up as next year’s honoree.

Glenda Bailey hosted — it was her idea to stage the evening as a conversation between Chastain and Lagerfeld. “We were trying to find an actress who would feel comfortable being an interviewer, because it’s a lot more difficult than it looks,” said Bailey of the pairing. “Jessica was very determined to do this in her own way.…Let’s see what happens because Karl is so spontaneous and fast and witty. You never know what he’s going to say next.”

So what was baby Karl like? “Apparently very cute,” he told Chastain. “But all mothers say that.”