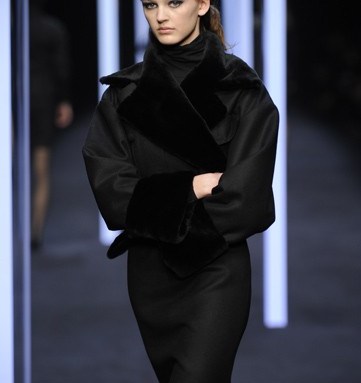 This group of models took the season by storm—either by walking the most number of shows or garnering coveted spots. And they managed to make it look effortless despite towering stilettos and complicated wardrobe changes.

Name: Suvi Koponen
Hometown: Vantaa, Finland
Age: 20
Shows Booked: 65 (opened five; closed seven)
“If there’s something wrong with the shoes, or the clothes are falling off you, you think about that. If the music is really good I just sing the song in my head. Usually I think about going to the bathroom because they won’t let you go right before the show.”

Name: Jourdan Dunn
Hometown: London
Age: 17
Shows Booked: 42 (closed one)
Special note: Dunn is the first black model Prada has booked since the Nineties.
“[After modeling] I’d love to go back to school and take some business and acting courses. Business and acting might sound like an unusual mix for some, but I’d love to open up my own performing arts school.”

Name: Heidi Mount
Hometown: Salt Lake City
Age: 20
Shows Booked: 54 (opened four; closed one)
“I’ve been acting for a long time. I always would like to get back into that. But most important to me is being able to spend a lot of time with my son and maybe get back to doing some of my sculpting.”

Name: Olga Sherer
Hometown: Minsk, Belarus
Age: 19
Shows Booked: 64 (opened four)
“When I’m on the runway I’m just enjoying the moment. I love it. I do my best. All the shows are fun to do, but I love Lanvin, Galliano and Dolce & Gabbana.”

Name: Natasha Poly
Hometown: Perm, Russia
Age: 22
Shows Booked: 55 (opened six; closed five)
“My biggest satisfaction is to see the results of what I’m doing—when I see how after the show the designer has happy tears, or then to see my fashion story in the magazine and I cannot believe that it’s me in the pictures.”

Name: Ali Stephens
Hometown: Salt Lake City
Age: 16
Shows Booked: 46 (opened one; closed one) Calvin Klein hired Stephens exclusively in New York. “Opening the Calvin Klein show this past season was an honor. I will never forget that. Balenciaga and Prada were also highlights of the month because the runways were very fun and the atmosphere and clothes were great.”

Name: Kasia Struss
Hometown: Ciechanów, Poland
Age: 20
Shows Booked: 57
“I lost my shoes twice at Dsquared2 this season, so that was rather embarrassing. They kept slipping off so I just took them off and walked barefoot. I try to enjoy it all, and if any problems come along, just think of them as life’s ups and downs.”

The Breakout
If runway model status could be measured on a meter, Karlie Kloss would be in megawatt territory. She walked almost more shows than any other model for fall, and her success is amplified by the fact that she’s merely 15.

Hometown: St. Louis
Age: 15
Shows Booked: 64 (opened six; closed eight; opened and closed three)
“I never in a million years imagined that I would have been doing this to the extent I am. The other models definitely looked out for me and are very understanding of my age. I feel like I have a second family.”

The Veterans
While most of the models filing onto the runways were barely out of their teens, a few notable veterans were spotted this season. But even the most seasoned pros aren’t immune to a model’s worst fear: slipping on the runway. Karen Elson took a tumble in Zac Posen’s finale frock and was given a helping hand by Sean “Diddy” Combs and fellow model Caroline Trentini. But Elson took it in stride and came up smiling — and holding onto Posen’s hand as he took his bow.