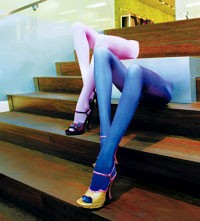 BEVERLY HILLS — Miuccia Prada, jet-lagged and in dire need of an espresso, surveyed the newest jewel in the Prada empire. The empress was pleased.

This story first appeared in the July 14, 2004 issue of WWD. Subscribe Today.

“It’s not only beautiful,” she said. “It has content and a specific point of view. Now I have to create merchandise and objects beautiful enough for the space. That by itself is the challenge. What is really interesting is this is an experimental space. I can design things for it and escape the buying system. I can work like I have a boutique.”

Citing the struggle to balance creativity and commercialism, Prada said, “We had long discussions on how to stay big and still remain small, sophisticated and special. It is a public space in the end.”

The designer, dressed in a cashmere gray short-sleeved sweater, a leather skirt inset with tiny mirrors and a green feathered headband, spoke of her collaboration with Dutch architects Rem Koolhaas and Ole Scheeren as the finishing touches were being put on the 24,000-square-foot building between Gucci and Brioni at 343 North Rodeo Drive. It joins Prada’s so-called Epicenters in Manhattan’s SoHo, which opened in 2001, and the Tokyo space unveiled in June 2003.

The Prada showstopper is the largest store on Rodeo Drive, as Brooks Brothers falls to the number two spot at 22,000 square feet, and it appears to be as much about design creativity, technology and visual stimulation as bags, shoes and belts.

And that’s just fine with Prada. It’s taken three and a half years to design and rebuild the space, which joins a network of 248 Prada Epicenters and stores worldwide.

It is also the first Koolhaas project to bow in Los Angeles, a center for modern residential architecture. In 2001, Koolhaas briefly linked up with the Los Angeles Museum of Modern Art for its redesign but donors pulled the plug over his plan to raze all of the museum’s Sixties-era buildings.

In aluminum, wood and steel, Koolhaas and Scheeren challenge traditional ideas of what a retail space should look like. by merging public and private, entertaining the shopper and using technology to make it all happen.

“This is another way stores can engage,” Prada said. “I was always very skeptical about stores that act like that, but in the end I realized you can introduce your world in another dimension and make it much more rich and much more interesting.”

There is little doubt shoppers will linger to take it all in. Perhaps the store’s most dramatic feature is the entrance. On a street stacked with granite and glass facades, Prada has none. A 45-foot-wide aluminum panel retracts into the sidewalk, merging Rodeo Drive and the store during working hours and sealing it off at closing. An air-curtain system separates the interior and exterior temperatures. Hovering above the entrance is an aluminum overhang, cantilevered out 15 feet.

“The much more radical statement was not to build a facade,” Scheeren said. “We wanted to bring the interior as close as possible to the street. It merges the store with the street and declares it a much more public place than usual.”

Because there is no facade, there are no windows for display. In their place, Koolhaas and Scheeren have extended the mahogany-like Ipe wood floors way beyond the aluminum retractable panel and have cut into it three fiberglass cylinders topped with glass so that passersby glancing down can glimpse mannequins dressed in Prada merchandise.

If SoHo Epicenter’s visual centerpiece is the wooden wave that either displays shoes or seats people for panel discussions, the Beverly Hills’ focus is the “stair hill,” a wide wooden staircase in the shape of an inverted V rising from the entrance and descending to the back wall. Shoes on the legs of mannequins — swathed in Prada hosiery— are strategically placed on the stairs and shoppers will be welcome to sit on and climb it.

“It’s the exact opposite of New York,” said Prada, noting each Epicenter is designed specifically for the city in which it is located. “Instead of going down, you go up.”

Scheeren spoke of other differences from New York. “This one is more horizontal, a lot lighter, a lot easier,” he said. “A little more artificial. There are a lot of things that play off of where it is.”

On the first floor, an aluminum tunnel slices the stairs crosswise where antique-like cases show off Prada wallets, key chains and sunglasses against a white-and-black-checked marble floor.

There are several trompe l’oeils to entertain the shopper, too, such as a half-dozen large blond wooden settees placed throughout topped with what looks like frosted glass blocks. But touch or sit on one of the the blocks and a gel-like substance squishes like a gummy bear. The gel’s density is akin to human flesh, Scheeren said, and comfortable to sit on for extended periods of time.

On the second floor, where women’s ready-to-wear is located, there is “the sponge,” a waxy plastic-like material in light green as a reference to the old store designs. The porous half-air, half-matter substance looks like something out of a sci-fi movie. “You can hang things in there or it can act as a background but it has a very artificial character and that [make-believe] is, of course, why it is here and not in New York,” Scheeren said.

The third floor, where men’s wear is located, is flooded with natural light. There are brushed aluminum floors, galvanized steel beams and skylights letting in the Southern California sun. Merchandise is displayed on mock airport conveyer belts that evoke images of security and scrutiny. For privacy, a VIP room behind the men’s department can be partitioned with a curtain. Elevators nearby lead down to the back parking lot and alleyway — perfect for quick and undetected getaways.

Technological wonders abound. Frosted-glass partitions “sense” a shopper’s movement and turn transparent as he or she walks by to reveal more views of the store. In dressing rooms, a customer can step on a metal pedal on the floor marked Privacy to turn clear glass enclosures opaque. And then there is the so-called magic mirror, which is actually a camera set up in the back of a dressing room recording 360-degree turns, so the consumer knows exactly what he or she looks like in the merchandise. No skinny mirror here. “It was set up to be brutally honest,” Scheeren said.

Finally, there are plasma screens hanging alongside skirts and dresses and transmitting stock market data, daily news feeds and other images. Unlike New York, the Beverly Hills store does not yet contain an RFID system — antennas that can pick up radio frequency identification on each piece of merchandise. It is still being tested and fined-tuned, Scheeren said.

A small army of Prada employees on Monday were unpacking the fall rtw collection, a fusion of computer-inspired prints, romantic Fifties circle dresses and beaded skirts and dresses. Against the store’s backdrop, the collection inspired by PlayStations and video games looked perfectly at home. The Beverly Hills location will also carry handbags, footwear accessories and beauty products.

Prada brushed off the question of whether the spectacle will translate into increased sales. The Epicenter could rake in more than $15 million to $20 million in sales its first year, according to analysts familiar with Rodeo Drive. Neither Prada nor company executives would confirm the figure.

“You cannot do something just for the money,” she said. “You have to do things you believe in and eventually you will make money. It’s difficult to do things just to sell. [The store] is a correspondence, a contact with people.”

“Each season you can change [the plasma screens] and ask different people to collaborate,” she said. “You have to change merchandise displays, screen murals change, [employees] are very busy all the time. You have to keep it alive. [Epicenters] can’t be abandoned for one second.”

And they aren’t cheap. Although the company would not disclose how much was spent on the store, construction sources familiar with the project estimated the figure at $35 million.

The opening occurs as the company seeks to unload a debt of 675 million euros as of 2003, or $832 million, brought on by the Nineties acquisitions of Jil Sander and Helmut Lang. The goal is to further reduce debt to less than 290 million euros, or $358 million, by the end of the year.

In February, Prada’s husband and company chief executive officer Patrizio Bertelli, who stayed at headquarters in Milan for meetings, said he would sell 130 million euros, or $160 million, worth of real estate to Italian property company Beni Stabili to reduce debt. Prada officials did not confirm whether the company is planning to sell an 80 percent stake in the Tokyo Epicenter to net 90 million euros, or $111 million, although they conceded it remains an option. There is no plan to sell a stake in the Beverly Hills Epicenter. “We have a number of initiatives, one of which is real estate spin-offs but no official plans,” said Jason Jacobs, a financial spokesman.

Profits and sales are on the upswing, particularly in the U.S., where sales at the wholesale level via Neiman Marcus, Barneys New York and Saks Fifth Avenue and Prada’s 17 directly operated stores increased 25 percent in the January-through-May period compared with a year ago. In the January-through-May time period, sales at the SoHo Epicenter increased 35 percent compared with a year ago. In 2003, profits jumped 33 percent to 36 million euros, or $44.4 million, on total sales that declined 13.4 percent to 1.36 billion euros, or $1.7 billion. Last year’s sales declines were blamed on the war in Iraq, the SARS outbreak in Asia and the appreciation of the euro against world currencies. All dollar amounts have been tabulated by Tuesday’s exchange rates.

Opening a store in the U.S. holds little mystery to Prada, who likens the American customer to Europeans. A particular focus for her now is decoding the women of China, where an Epicenter may land in either Beijing or Shanghai in the next few years, she said. “I want more specific details of different countries. Business is so difficult. To get into the mentality of the people, who is [the customer]? Is she a wife or a lover or one who is earning [money]?”

Prada is making the company’s first store at the Galleria Vittorio Emanuele II in Milan, which her grandfather opened in 1913 to sell high-quality leather goods, into an Epicenter. The main store will largely be kept intact, simply expanded, she said. It will be finished in about a year.

As for the fate of the temporary Prada store operating at Little Santa Monica Boulevard and Rodeo Drive, Prada could not say. There has been speculation Prada Group’s other labels such as Jil Sander, Azzedine Alaïa or Helmut Lang could take over the property lease. “My husband never wants to give away anything,” she said.